I watched a really odd movie last night about an Australian artist Bradley Morahan (played by James Mason) who moves to a shack on a small island in the Great Barrier Reef to recharge creatively, where he meets a young woman who becomes his model and muse (Helen Mirren in her very first film role). The movie is Age of Consent (so named because the Mirren character is under the age of consent--at least according to her alcoholic granny), directed by the great Michael Powell. 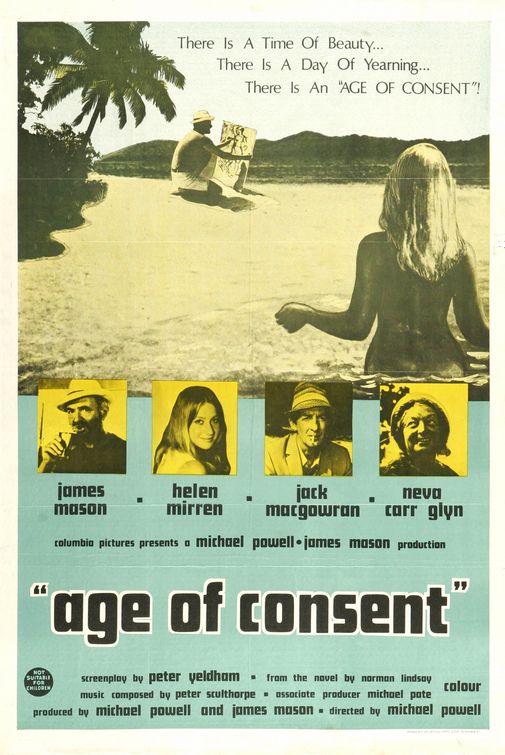 The film is from 1969, and is based on Age of Consent by Norman Lindsay from 1935 (the film brings the action up to the current day). 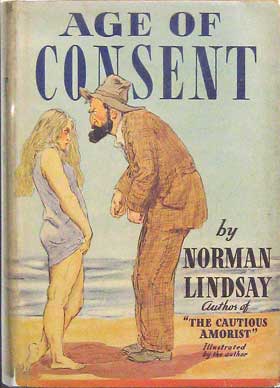 The cover of the book looks even more pervy than the movie! And the movie was petty daring. Helen Mirren begins her long tradition of getting naked on film in this movie. (The movie faced censorship in the UK.) Not surprisingly, when you google for images from the film, you get a lot like this: 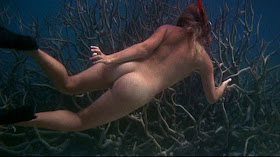 Hey, and no wonder. Helen Mirren is gorgeous! But I was fascinated, watching it, by the problem that filmmakers have in depicting art in a film. It's especially tough when an artist in a film is supposed to be good. What do you show in the movie as a fictional artist's work? For this movie, they actually had two artists producing the work supposedly produced by the Morahan character. In the opening scene, we see a show by Morahan in a New York art gallery. The work looks a lot like late Matisse. (I couldn't find any still of it, or any of the other art from the movie, online, alas--you'll have to rent the movie.) The artist for this part was John Coburn, who was actually a very distinguished Australian abstractionist. That's one way to get good art for a movie--use actual good art. The paintings from the island, including many nude paintings of Helen Mirren, were produced by another distinguished Australian artist, Paul Delprat.

And that's one thing that's really cool about this film. It is really respectful of Australian art and its traditions. Norman Lindsay was a great (if esthetically reactionary) Australian artist who, as you might guess, really, really liked to paint nude women, and in the movie, in a scene in Morahan's studio, you can see rather prominently a book about Sidney Nolan, Australia's greatest painter.

According to Wikipedia, James Mason became a mentor to Sam Neill in the 1970s. This is really interesting because Sam Neill played Norman Lindsay in the movie Sirens (1993). This movie again featured quite a bit of nudity (hard to avoid if Lindsay is your subject), including Elle Macpherson (!). And in a perfect move by the filmmakers, Paul Delprat was once again brought in to produce the "Norman Lindsay" images. (It has to be said that Delprat's art doesn't look anything like Lindsay's!)