The Big Show at Lawndale, part 2

The ubiquitous Emily Sloan plays a little game with the whole format of the show. Her Kenmore piece is, in itself, a curatorial act. It's as if she is staking a claim for curation as artistic act. And she is playing on the tradition of tiny art spaces. (Think of Sharon Engelstein's Gallery One Three Seven or most famously, Duchamp's Box in a Valise.) In presenting the refrigerator as an art space, she "smuggles" in all the artworks on it and in it. 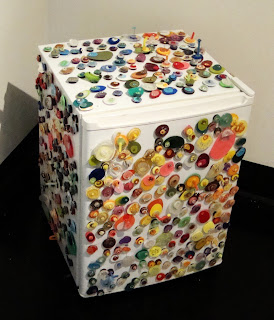 So Valerie Powell's magnets, which are similar to other work she has done, become the "outdoor sculpture garden" for this lilliputian art space. Inside, you have things like this tiny minimalist sculpture made of butter. 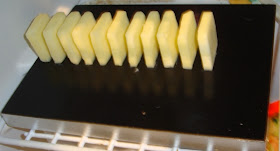 (Its geometric regularity recalls Judd, but its material recalls Beuys.)

There were a few abstract paintings I liked. I mentioned Joseph Cohen, or course. I also enjoyed these two very different pieces. 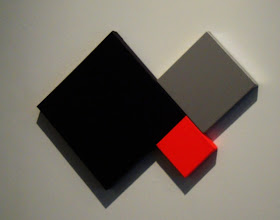 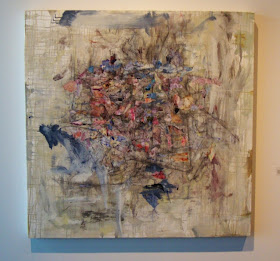 The angled geometries of Myke Venable's piece  appeal to me like a Robert Mangold painting, and I like the Philip Guston-like mark-making in Tapper's.

I'm going to close with a few disparate, unrelated pieces that I like from the show. There is not story that can be told here--and that is essentially true for the exhibit as a whole. Themes, tendencies, stories that emerge (naked ladies!) are countered or undermined by other tendencies (abstractions, feminist art). That's what you can expect from The Big Show. The work offered to the curator doesn't allow him to tell a story (beyond a story of plurality or chaos), even if he had any inclination to do so. 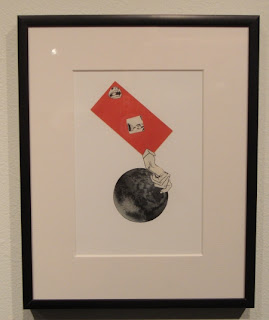 I bought a piece of Fosdick's from a show at Gallery 1724 earlier this year. His collages are simple and clever. This one really exemplifies "simple" and "clever"--but I want to also call attention to the excellent design that looks almost like early Russian avant garde design. 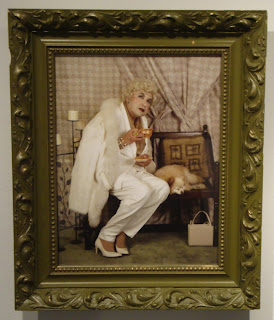 Joel Hernandez had two great photographic portraits in the show. His subjects are shown in their own environments (I assume) and really come through as real people with constructed identities. The photos play in the fuzzy space between authenticity and artifice. 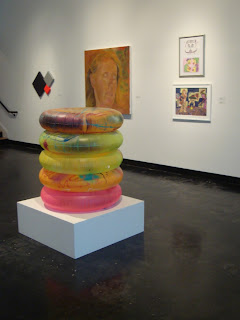 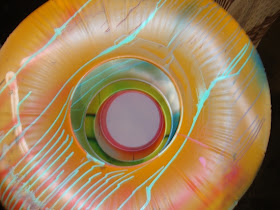 Anthony Day, Total Life Saver, floats and airbrush (from above), 2010

This last piece looks like the classic "shit, the deadline's tomorrow and I haven't even started!" piece. (I did a few of those as an art student.) Still, sitting on its clean white plinth, it looks really good. And that's all ya need.(I have to say I like this better than his styrofoam pieces.)
Robert Boyd at 12:49 PM
Share