Odds and Ends from the Art Houston Weekend

I have a lot to write about from last weekend--The Big Show at Lawndale, the 28th Annual Juried membership Exhibition at HCP, and several good gallery shows. But for now, here are some odds and ends from other shows.

I'm going to assume everyone reading this (in Houston) has been to Goldesberry Gallery. I haven't written much about them, despite the fact they regularly display art that I like--art that is playful, art that is beautiful, art that has unexpected and appealing textures and volume. It's a "craft" gallery. So lots of handmade things--lots of ceramics. But they have a very modern conception of craft. You can see this by noting how many Goldesberry artists were in the avant-craft show Not the Family Jewels. One of those artists is San Antonio artist Gary Schott. His work--completely handcrafted (he even made the wooden handles on a lathe)--requires viewer interaction, so I made this little video:

Over at Barbara Davis Gallery, I saw a bunch of pieces that looked a little like this when I walked in. 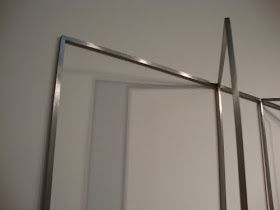 These are by Jay Shinn, and they initially made me think of Larry Bell's minimalist pieces with their tinted glass planes. But as I looked closer, I realized there was no glass in them. 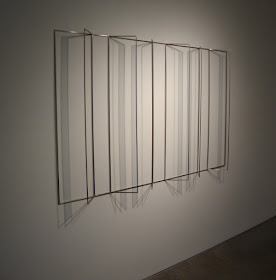 The "shadows" were actually shapes painted right on the walls.

(Sorry I don't have the titles for the individual pieces.) So in reality, the piece consisted of the lightsource, the metal framework, and the painted "shadow" on the wall (which worked in conjunction with the actual case shadow of the metal framework). I don't think there is much behind these pieces, but they sure are clever!

Inman Gallery had a huge show spread over two galleries that consisted of portraits and portrait-like things. It didn't really cohere as a show, but neither did The Big Show. It's hard to do when you have a lot of different artists, and Inman had 35.

Still, a lot of the individual pieces were good. I always like Beth Secor's embroidery. 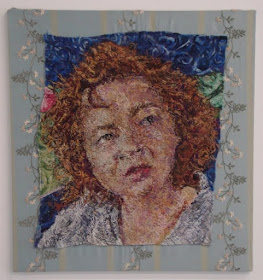 The thing that makes these look so cool (much much better in person) is that her stitches go in all directions--they feel almost random--and when you look up close, you see that the colors of the threads are often weirdly contrasting with the overall color of the area. These are pieces that are fun to look at up close--as well as from across the gallery.

"Fun" is not a word I'd use for Dario Robleto. Morbid, haunted, gothic--these words come to mind. Maybe just a hint of arid wryness leaks into the work. He had a small piece in the show. 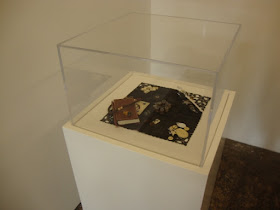 You know, when Gallery 1724 announced they were going to host a Salon des Refusés, I was amused but fully expected it to be mostly bad art. The original Salon des Refusés (which was sponsored by the French Government!) famously included work by Monet, Manet, Pissarro and Cezanne, but also a bunch of second rate artists who couldn't make it in the regular Beaux Arts competition.

But in the end there were pieces in our own Salon that I liked. When you walked into the gallery, you saw this: 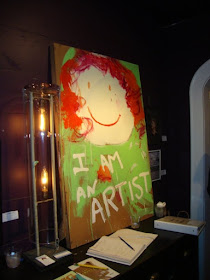 I don't know who did it, but right on!

Here's another one I liked. 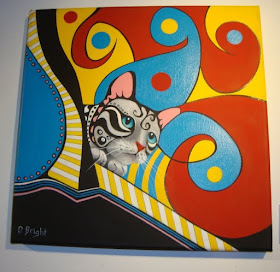 This wacky psychedelic imagery and maori-ish facial tattoos seem so at odds with the cool demeanor and realism of the cat.

I went by Rudolph-Blume where I saw Lane Hagood (depicted above in a really unflattering photo...). He told me that after he won the Hunting Prize, he thought he'd quit his gallery job. But a conservative financial instinct won out in the end.

OK one final photo. Laura Rathe Fine Art has the most over-designed interior I have ever seen. Here's the bathroom. 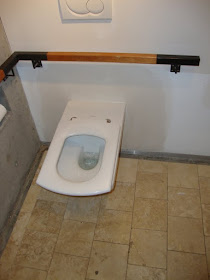