The Great God Pekar Is Dead

One of my comics heroes died today. I never met Harvey Pekar, creator of the great comic book American Splendor, in person, but I spoke to him on the phone numerous times when I was working for Fantagraphics. At the time, he was engaged in a very slow-moving debate with critic Robert Fiore in the pages of The Comics Journal. (This was pre-internet. A really rambunctious public debate would last months due to the infrequency of the magazine.) He was calling up a lot and for a while, I was the semi-designated Harvey-handler. He would talk your ear off, which was fine by me. I had been a fan of Pekar's for a long time.

I first encountered his stuff in the early 80s. It was definitely part of my alternative comics awakening. It mapped out a way to use comics that I had never seen before. And for good reason--Pekar's matter-of-fact autobiographical realism was something genuinely new in comics when he started doing it. Now I probably value comics that tell a real (even autobiographical) story with a richer use of metaphor--think Justin Green's Binky Brown or David B's Epileptic. But Pekar's realism was, at the time, a blinding revelation.

A lot of people will be writing about Pekar in the next few days. I want to just touch on two related aspects of his work that resonate with me to this day. 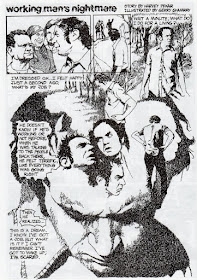 Pekar wrote extensively about work--his own work and other people's. This is perversely rare in comics, despite the universality of work. Pekar had an emotional and intellectual commitment to being working class. Class always pops up in his stories set in the V.A. Hospital, where he was a clerk. He needed to have that constant steady income, too. The need was psychological, as shown in the page above. Not having a job, a paycheck, structure--that was his nightmare.

It was perhaps because of this that he had conflicted relationships with the world of art. He definitely identified with artists, intellectuals and bohemians, but I think fear of operating without a net kept him from chucking it and just becoming a full-time writer. 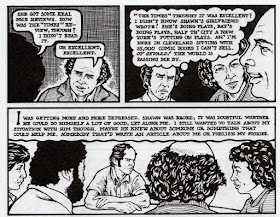 This conflict between his desire for the artistic life and his fear of its uncertainties is played out in "Grubstreet U.S.A.," where he recalls meeting Wallace Shawn. His incapacity for the artist's life is demonstrated in one of his most famous stories, "American Splendor Assults the Media," with Robert Crumb. It's also one of the great rants, by the way.

For Harvey, work is what enabled him to be an artist. Losing that ability was something he dreaded--that comes through in the story "An Argument at Work." 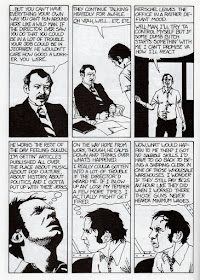 I think his work suffered after he retired. He had time to do longer pieces, but the lack of economy really hurt them. I think he felt obliged to create a narrative, when what he was good at was observing and recording moments, episodes, short stories. But if his work faltered in his later years, so what? He had produced enough great work in his early years that his place in the history of comics is assured.

(One final note: whatever happened to Gerry Shamray and Kevin Brown? They were two excellent artists for Pekar--I hope someone tracks them down and asks them about their work with Pekar. Their collaborations with Pekar deserve to be remembered.)
Robert Boyd at 9:47 PM
Share