Poems & Pictures at the Museum of Printing History

Poems & Pictures: A Renaissance in the Art of the Book (1946-1981) at the Museum of Printing History is probably the best exhibit you have never heard of going on right now. The Museum of Printing History is a low key (but wonderful) institution--indeed, unless you are specifically looking for it, you are very unlikely to stumble across it accidentally. Make an effort to find it for this show, though.

I made that effort on Friday for the opening. When I showed up, there were so few cars in the parking lot and so few people inside that I thought I had missed the opening. But no, here it was. 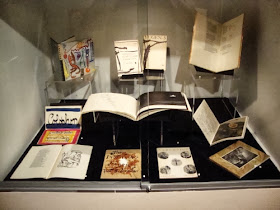 This is what the exhibit consists of--lots of cabinets displaying magazines and books. These are books that were the result of collaborations between artists and poets (and poet/artists). They range from quite elaborate productions--"printing orgies" (as someone once described Raw)--to mimeographed 'zines. Generally speaking, the curator has chosen work where the poet and artist worked in collaboration, although there are some cases where the poem preceded the art. Obviously this made me think of comics, but very few of these items are comics or even comics-like. Still, many feature an interweaving of text and image to a degree that recalls comics.

A lot of these pieces are printed with letterpress. If you come across letterpress printing today, it's likely to be on a wedding invitation. In the art/poetry/small press world, it is a sign of quality, a kind of old-fashioned hand-made printing job one occasionally sees in chapbooks or small press poetry books. And a lot of the books and magazines in this exhibit are printed on letterpress. But as one of the publishers included, poet Tom Raworth, was quoted in the catalog, "I mean, letterpress wasn't particular and arty, particularly in those days, it was just another way of printing." Raworth was speaking of the 1960s, and the impression one gets from the catalog was that there were a lot of old letterpresses around--some over a hundred years old--that one could pick up cheap in junk shops. So while there is an art to letterpress (and certainly a skill), these publishers were using it for much the same reason that 'zinesters of the 80s and 90s used photocopiers, and why I write a blog on Blogger--it's an economical way to communicate with a small number of like-minded individuals.

So you see in this exhibit extreme rarities like Wallace Berman's Semina 2. 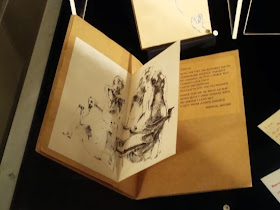 Berman was one of the Ferus artists. In his one and only Ferus show, an illustration he had drawn for Semina was declared obscene by the ultra-reactionary L.A. police. This experienced soured him on working with commercial galleries for life, and also made him very wary of printing up loads of copies of Semina. He only printed enough to give to sympathetic souls. He didn't want a bookstore or art gallery to be busted because of his work ever again. And having loads of people see it was not important to Berman. He was one of those people who is very rare today--an artist who cares not a jot for fame or success or even praise. He was a shamanic character, and only needed to communicate with a select few who were on his wavelength.

This indifference to large print-runs and fame is something pretty common among the poet/artist/publishers here. Not necessarily because they were all like Berman--but they chose a life of poetry and of working in a small-press environment. It is inherently a life and medium for a select few. So if the work was produced on something like a mimeograph, that was OK.

I think when comics fans think about the evolution of minicomics, the small-print-run art-comics that are almost always handmade items, we think about 'zines. And 'zines have a well-established history. But when I think of some of the elaborate comics produced by Fort Thunder and other art-comics publishers, and when I think about their approach to comics as an art, it feels a lot closer to Wallace Berman and Joe Brainard and the teams of Alastair Johnson and Frances Butler or Bill Berkson and Philip Guston than to any zinester.

Of course, Brainard was really into comics, and he roped his friends--basically a bunch of poets who came to New York from Tulsa, OK (weirdly enough)--into doing comics with him. Brainard's big obsession was Nancy (see The Nancy Book for the results of his obsession). His friends played along. 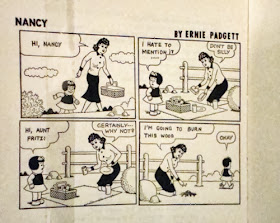 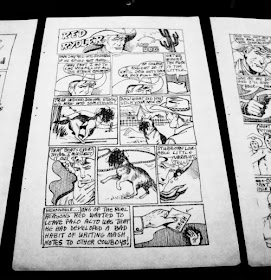 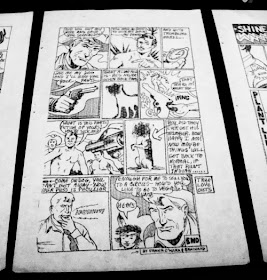 There are several avant garde experiments with comics that were published in the 60s and 70s, far outside the mainstream of comics (and even outside the world of underground comics). Martin Vaughn-James, Jess (whose illustration work is represented in this show), and Brainard of course. Probably others as well. I really wish some publisher with an eye towards the art history of comics would bring these back into print.

This all barely touches on the riches here. I plan to revisit the show and soak it in some more. It's a little much to absorb in one trip. The curator, Kyle Schlesinger, has a highly personal take on all this. He is one of those poet/publishers. His small press is called Cuneiform Press--indeed, he has one of those 100+ year old letterpresses. (But perhaps the oddest thing about him is that he is a professor at the University of Houston-Victoria. You never know what kind of talent is hiding away in our more obscure universities and colleges.)
Robert Boyd at 8:57 PM
Share