Last weekend was Artcrawl and WHAM (Winter Holiday Art Market). As I have already written, I bought a Brian Piana painting at WHAM. But I also checked out everything and took lots of photos. So here's what I saw and liked at WHAM and Artcrawl.

WHAM is kind of a craft show but with a few full-on fine artists included. The crafts tend toward the artsier end of craft as well. It's a pretty good mix. I like that it's not clear where you should place these skateboards--art or craft? That distinction is becoming less and less important (or interesting), fortunately. 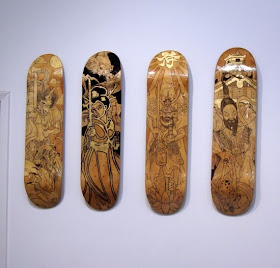 Zorrilla is a tattoo artist who paints of skateboards and surfboards on the side. I liked this clash of elegant Japanese imagery with all-American skateboard decks.

A lot of the craftspeople were displaying clothes and fabric. I really liked this elaborate dress. 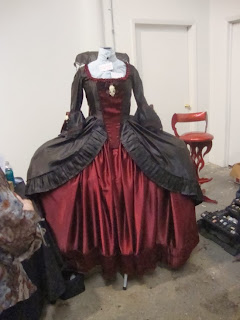 The artist is a bit coy about her name (at least I can't find it online), but she goes by the nom de needle "The Stitch Witch." This dress reminded me a bit of the Victorian mourning dresses in Dario Robleto's An Instinct Towards Life Only a Phantom Can Know. 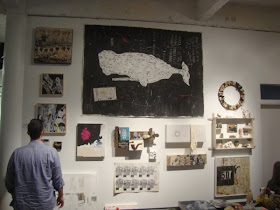 
I have been on the fence on Matt Messinger's artwork, but I finally have decided that I like it. Somehow, seeing it all in this booth was what tipped me in its favor. 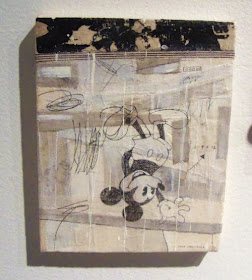 
I like his rough-hewn paintings with their classic cartoon characters. It's as unslick as the crummy black-and-white film stock used in early Disney and Fleischer Bros. animated cartoons. R. Crumb, talking about old comic strips from the early 20th century, spoke about the smell of boiling cabbage that wafted from these working class fantasies. I get that from Messinger's paintings--but mixed with the smell of tacos, too. Working class food for working class paintings. 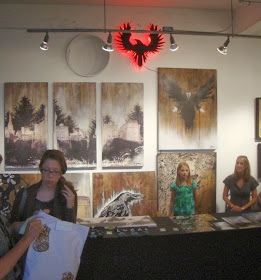 
I liked Steven Trimble's paintings, and I really liked his sign--very striking!

David J. Webb makes linoleum block prints of images from old stamps. The level of craftsmanship is really high (this photo does not do it justice). He spoke of using a microscope to cut the finer lines in the blocks. 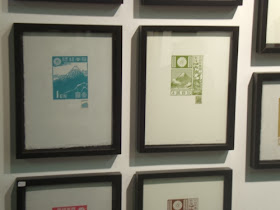 
He told me that he is sometimes able to get 100 crisp prints from a single piece of linoleum. 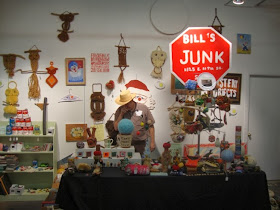 
Bill Davenport came out with his junk. He wasn't sure how it would go here, but he said he likes trying out different venues to see what works where. He had a humorous attitude toward all the handicrafts being sold elsewhere at WHAM: he said it would all end up in his store eventually. That lead to a interesting conversation about the value of art. 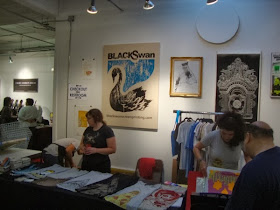 
Black Swan had a bunch of really cool T-shirt designs. Unfortunately, I don't see a lot of them on their website, but the website promises more designs coming soon, so keep checking. 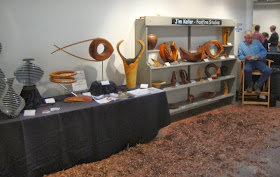 
Jim Keller is a woodcarver from Richmond, TX, who makes highly polished abstract geometric wood sculptures. But what really sticks out for me is that he will allow the "flaws" of the wood--cracks, rough spots, bark--become part of the sculptures. So you get this pleasing tension between rough and smooth, polished and unfinished. 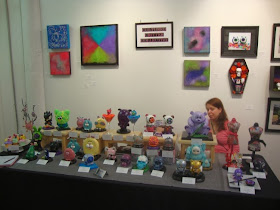 
One thing I don't quite understand is the popularity amongst hipsters of those little vinyl toys. Domy does a big business in this stuff. Lots of artists I like and respect have made vinyl figures. They remind me of the little statues of superhero characters you can get at comic stores. They just seem like nerd porn to me. Here's a story. A little under 20 years ago, I interviewed for an editor job at Dark Horse Comics (which I got). I went down for my interviews and an office tour, and I was surprised to see the offices of the editors and even the president of the company were filled with these kinds of toy and statuary. I was actually a little shocked by it. These were fully grown adults! I was coming from Fantagraphics, where the walls were covered with rock-n-roll flyers. So later, I asked Ryder Windham, a friend of mine who was already an editor there, "Ryder, what the fuck is up with all these toys?" He quickly cautioned me not to make fun of them or even mention them--that editors there were dead serious about their statue collections. Ohhh-kay. Needless to say, I ended up with the barest cubicle of all--I just wasn't a team player, I guess.


Anyway, I guess it's a bit wrong for me to talk about my disdain for these toys and then praise the Cultured Critter Collective. But I thought the figures that Valerie G created were pretty cool. I wouldn't want one for myself, but I can see my five year old niece and various 20-something hipsters loving them. I liked this guy especially: 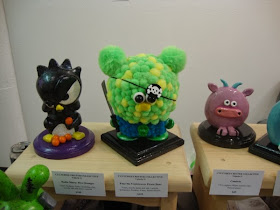 
That's it for WHAM. My next stop was the Elder Street Lofts. And I'll continue this in part 2.
Robert Boyd at 12:53 PM
Share