After I left WHAM, I came over to the Elder Street Artist Lofts. The first piece I saw there that I liked was this sculpture by Jonatan Lopez. 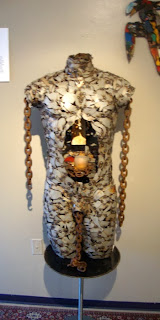 
This piece recalls Vessel States, the installation Lopez did at Project Row Houses last year. But the level of craft displayed here is higher. I don't know if this reflects a growth in Lopez's abilities, or if it's just a result of the demands of the piece itself. Still, the use of headless bodies and chains is common in both works--and equally spooky. One thinks of prisoners or slaves, as well as s&m imagery. (I remember an interview with Leon Golub where he admitted that in order to create his searing images of interrogations, he often referred to S&M magazines for poses. And horrifically, this association came around recently with the stomach-churning photos from Abu Ghraib.) Removing the head does several things. It dehumanizes the image, but it also in a way classicizes it by making us recall sculptural fragments from Greece and Rome. It is suggestive of horrific violence--a dismembered corpse. I don't know if Lopez is influenced by Golub, Goya, the Marquis de Sade, or the Chapman Brothers. I am disturbed looking at Redeemer and Vessel States, and that's good. This kind of work is probably something Lopez should continue to explore. 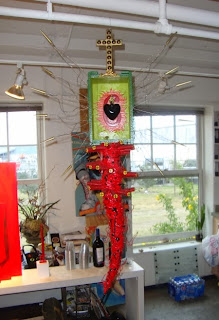 J.P. Hartman was someone whose art I had seen before at The Big Show. His work is all brightly painted assemblage and sculpture, usually with a socially-aware or political point. Some of the politics are simplistic--messages like "Republicans are bad" or "G.W. Bush is a rat" are common. That's the difficulty of doing political work in a visual medium. Hans Haacke can pull it off without producing mere propaganda, but not too many others. That said, these assemblages are great. They have a real funky energy to them. They were on display in this crowded apartment (it's misleading for Elder Street to refer to its apartments as lofts--as far as I can see, none have high ceilings or open plans). One thing he did that was cool was to place them on bright red plinths. Obviously J.P. Hartman is not a "white cube" kind of guy. Visual maximalism seems to be his approach.


I went to the Houston Foundry next, where I saw Naz--who I think is a U.H. student. This was another piece that made me uncomfortable. Girl in a box, imprisoned and on display. She wasn't doing a Laurel Nakadate deal--she wasn't showing off her body--but she was attractive, which accounted for part of the discomfort. How can I, a 47 year old hetero man, not feel like a creep looking at her (and taking her photo)? So, good piece. Mission accomplished. 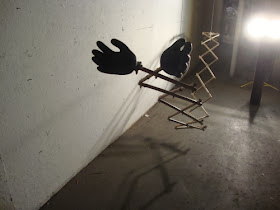 
Haden Garrett is a sculptor whose work has been displayed at Poissant Gallery in the past year or so. This photo is only part of the installation he did in this narrow hallway. I like the cartoon hands coming out to me. 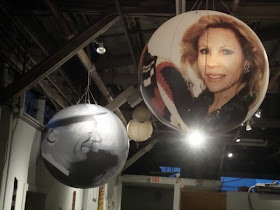 
David Graeve has a studio at The Houston Foundry, where he fabricates beautiful melted glass sculptures. (At least I think he has a studio there--he had a lot of stuff on display). But the things he does that I like best are these big balloons.


Then I crossed the freeway and checked out the galleries in the McKee street neighborhood. 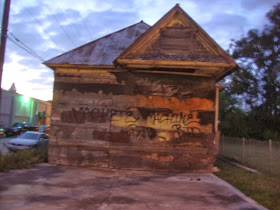 I don't know why, but I liked this crumbling abandoned building with its aggressive graffiti at the corner of Rothwell and Hardy. 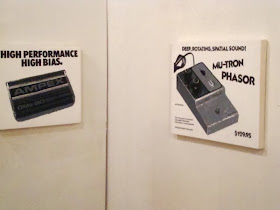 
There was a show in the old Temporary Space (RIP) space featuring work by James Burns, Christopher Cascio, and Nick Scott. I had seen Cascio's work before at Lawndale--really big collages. But I like these paintings of his better--deadpan recreations of old stereo equipment ads. Very nostalgic for a guy of my generation. 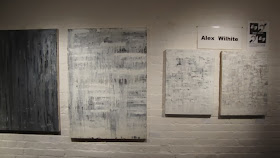 
In the cacophony of paintings that I saw in one of the studios (can't remember the name), Alex Wilhite's mostly white canvases were a visual oasis. Rough-hewn and austere, they struck me with their beauty. Wilhite had a sign up telling people he was deaf, and asking them to tap him on the shoulder if they wanted to speak with him. These painting ironically made me think of white noise. 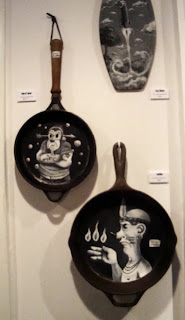 
Jimmy Houston had a bunch of humorous, cartoonish paintings that I liked a lot. His work reminds a little bit of Bob Zoell's--not so much in style but in manic lowbrow energy.


Mother Dog Studios always has pretty amazing stuff for Artcrawl, which makes sense given that they are the ones more-or-less behind it. Someone there--I don't know who--had this huge area that he was letting teens and children paint in. Update: I've been told this is the studio of Mitch Samuels, aka "Grystar." 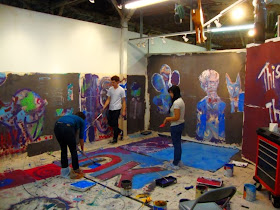 Then there was a dog-oriented exhibit that included these pieces by Maria Smits: 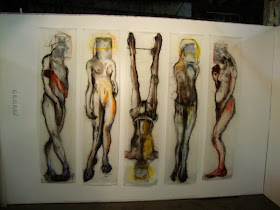 
These drawings by Maria Smits seem very closely related to the show she has up currently at Lawndale. I like the striking, muscular drawing, even if I don't quite get the dog heads. (Full disclosure: I own a small Maria Smits drawing.) 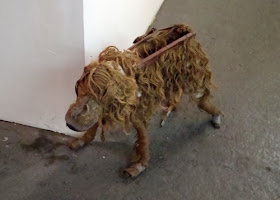 This guy was standing guard at the entrance of the dog show. I don't know the artist, though.


Greg Budwine contributed these beautiful dog portraits. I love the old fashioned magazine illustration style on display in these paintings. 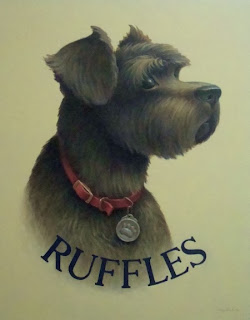 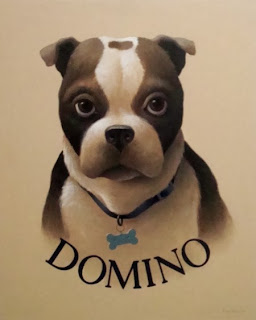 
I also like that for a show of art that was a little more cutting edge that whoever put this show together thought it worthwhile to include these highly illustrational pieces. Budwine has great technique and in these and other pieces, he takes sentimental subject matter and gives it a weird little twist with his idealized portrayal.

Mother Dog Studios honcho John Runnels was part of the dog show. He had several pieces that were like this: 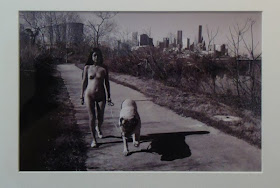 John Runnels, part of Bayou Beauties; the way some women walk the dog, inkjet on paper, 2009

Ladies, if you want to have John Runnels photograph you in the nude walking your dog along Buffalo Bayou, send Runnels an email at motherdogstudios@earthlink.net.

Runnels also had a room full of interesting work, including models for his Buffalo Bayou Park entrance and a bunch of work made of cigarette butts. 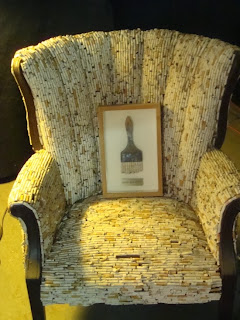 Runnels is always worth looking at. A crazy artist, a lover of naked females and the word "fuck," a protean imagination--he always produces interesting work.

John C. Runnels, House of Bausch (A Danger to be Safe in), graphite, Chartpack letters on tile and wood, 2010

One last Runnels. He is a capable drafstman as well as being a great assemblagist and conceptualist. I love the feel of this piece--the perplexing drawing with its combination of Clovis Trouille and Walt Disney's Lady and the Tramp--with it's equally perplexing collage elements. It makes for a mysterious, beautiful whole.

After Mother Dog Studio, I went over to the hardy & Nance Street Studios. I was pretty bushed and I wasn't seeing a lot of stuff I liked--but maybe if it had been my first stop, things would have been different. I was suffering from art fatigue (as you, my readers, are probably suffering right now). But I did like the childlike, minimal paintings of Celeste Tammariello. 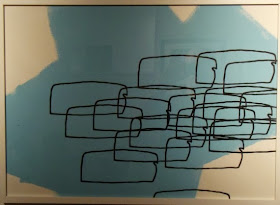 That's it for this year. Next year I think I'll start from the Southeast corner of Artcrawl and move roughly north and west. That way I won't poop out before I get to El Rincon Social and Aerosol Warfare.
Robert Boyd at 6:58 PM
Share