Comics I Got in Brooklyn, part 1

Looking online at various "con reports" about the Brooklyn Comics and Graphics Festival, one thing that amused me was that some attendees would take everything they bought, spread it out on the floor, and take a photo. It was funny, but at the same time, I get it--"Look at my haul!"

I didn't want to do that, but I thought I might do something similar. So what I am going to do is a series of short reviews of everything I bought in Brooklyn. And so I don't overwhelm you readers, I will be doing it in bunches of no more than four or five reviews per post. This is the first. 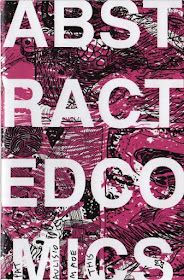 Pat Aulisio is an art student at The University of the Arts in Philadelphia. (Update: Aulisio tells me he graduated two years ago!) His other comics seem fairly straightforward. This one, though, is not. What he has done here is taken drawings and comics, scanned them, made the linework a single, non-black color, and then layered them on top of each other. Sometimes the layers are opaque, obscuring the layers below, sometimes they are transparent. In any case, it leads to a visual cacophony. If you look hard, you can pick out the "comics" aspect from the noise. 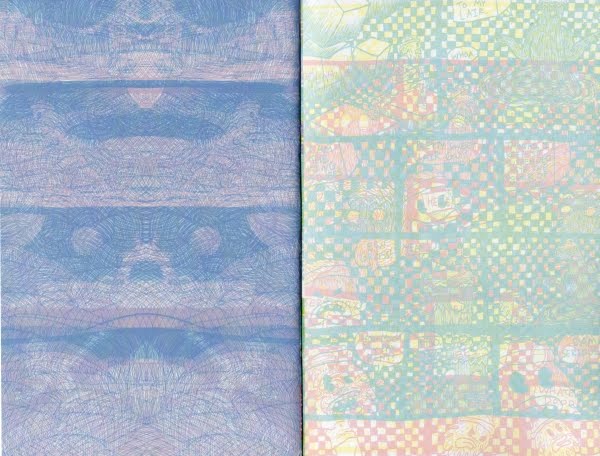 So there is a reason he uses the word "abstracted" instead of "abstract." He is more-or-less starting from a non-abstract space and deriving an abstraction from it. His abstract comics pages are not designs that have a sense of space to them in the way that a painting by, say, Franz Kline does. Nor are they geometric or minimal. They cover the who surface--the page--with an all-over composition. The booklet is only 12 pages long. Within it is tucked a smaller booklet in black and white. It is more comprehensible as a comic--it has arranged panels--but the contents of the panels are more abstract than the ones in the color booklet.

Overall, this is a nice little project. Lovely to look at, interesting to think about. If I were Aulisio's art professor, I'd give him an A.

Compared to Aulisio, Paul Pope is an old-timer. He's always been a prolific artist with a quick, elegant drawing style. I haven't followed his work for a long time, but he was definitely an important artist. While his drawing style was rooted in American and European comics, he was a pioneer in bringing Japanese storytelling techniques to American comics. In particular, his comic THB stretched the narrative of its relatively straightforward story in much the same way would see from the wave of manga that was starting to get published (barely) in the U.S. at the time. 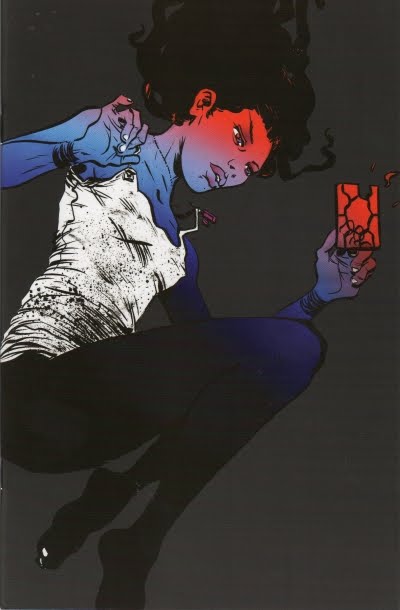 This issue of THB is more or less a standard comic book (a format that has become vanishingly rare among alternative comics--but Pope has long straddled the "alternative" and "mainstream" worlds). It is a collection of short pieces that have appeared here and there.

The stories here are not really very good. That's always been Pope's weakness--his stories. What works is something separate from the "story"--the storytelling. Pope creates a good mood and includes tons of interesting and often amusing details. The Fellini-esque director of a Tom & Jerry-style cartoon, the hand-drawn cover of Ziggy Stardust and the Spiders from Mars, the "Flop Flapt Flap Flopt" sounds that the stellar repairman makes when he walks, and so on. "The Masked Karimbah," for example, implies a backstory and a resolution, but instead leads up to these panels: 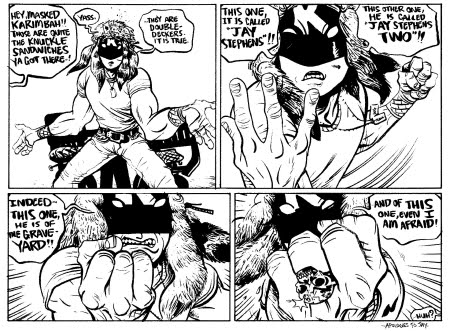 In short, the point of the story is to name and describe the two fists. (Jay Stephens is another cartoonist.) I can live with the weak (or nonexistent) stories. This accumulation of amusing or atmospheric details is quite enough. 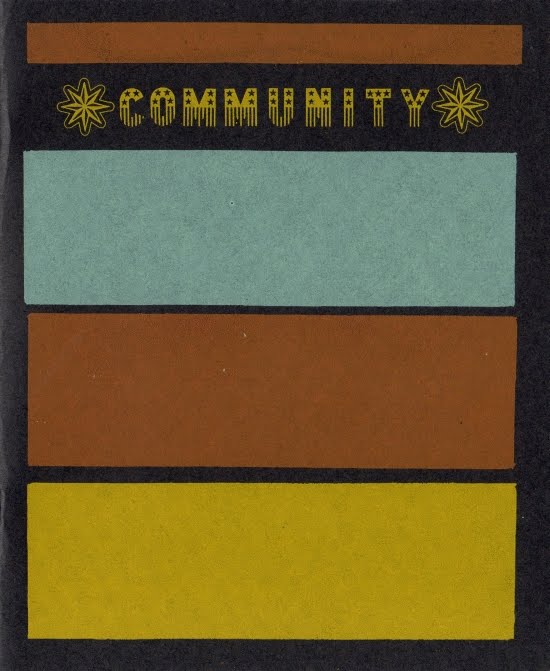 This small booklet (16 pages with a silkscreened cover) by Chris Day is a comic, but it's not obviously a comic. Indeed, the only reason I call it a comic is because it a booklet that contains a bunch of sequential images, references a website, Closed Caption Comics, in the inside back cover, and I bought it at a comics show. But the images look like this: 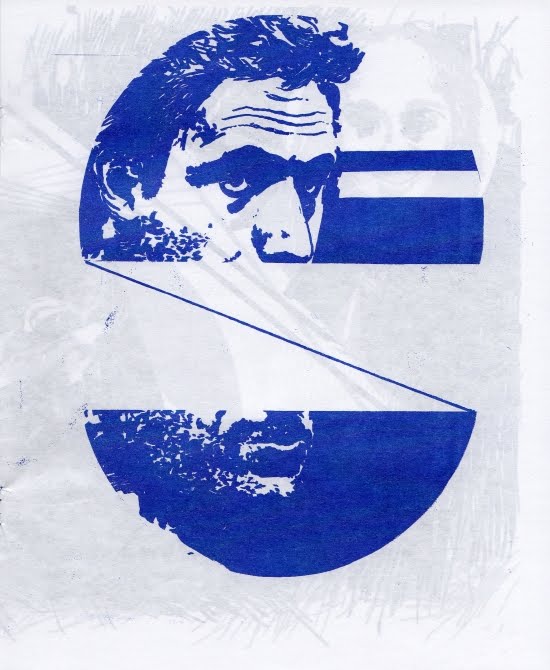 So imagine if you saw images like this displayed individually but in the same order on the wall of an art gallery. Would you still call it a comic? I wouldn't. (Whereas, if you saw Paul Pope originals on a wall in a gallery, even if they were completely non-sequential, you would instantly identify them as comics.) This leads to two conclusions. First, as Duchamp demonstrated almost a hundred years ago, context matters a lot. And second, the Brooklyn Comics and Graphics Festival was about comics that overlap or edge into the realm of visual art or gallery art or whatever term you wish to use for art hung on walls in galleries. I guess you could say that some of what was on display there was liminal.

As for this particular work of art comics, the images seem to be constructed out of photos reproduced (and perhaps traced) as high-contrast images, collaged together with vertain linear elements. There are some words, but no story or characters. The connections one makes between the images is not obvious and is likely to differ greatly among various readers. But the images are interesting to look at and ponder. 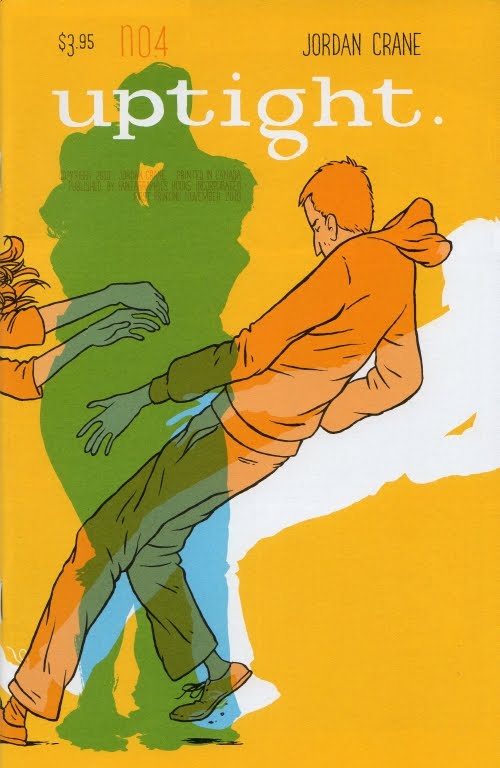 I said traditional-format comic books are rare in the alternative comics world, but this review features two of them. Jordan Crane is a great cartoonist and a great editor, whose anthology Non was one of the first and best "art comics" anthologies, a clear predecessor to Kramer's Ergot. His stories tend to range from somewhat realistic slices of life to kid-style fantasies. This issue of Uptight contains both. The front story "Vicissitude," about an auto mechanic's marital problems, is of the former type. The cover of this issue kind of encapsulates the story--the shadow of the couple embracing overlaid over the image of the couple fighting. This cover gives just a hint of some of the expressive color Crane is capable of. Unfortunately, this is a black and white comic book. (You can see a great example of his color comics work here.) The second story, about kids who find a monster in their school, is called "Freeze Out." In it, Crane gives you an idea of what he would do if it were in color. 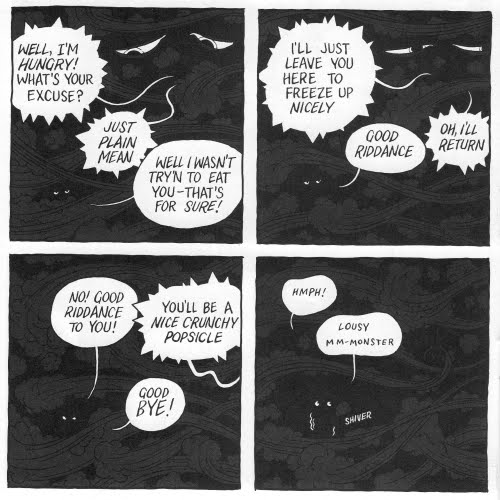 This very subtle grey against black is what I'm talking about. At first, you might not even notice it. I didn't. But just like your eyes adjusting to a dark room, they adjust to this. But Crane has another trick up his sleeve. You can see a dialogue between a child and a monster, and once you realize there is a grey picture in the black, you assume that you will be able to see the kid and the monster. But you don't--you only see blowing puffs of wind, depicted in age-old comics shorthand.

Both of these are continuing stories from the previous issue. Fortunately, you can read the previous issue for free on Crane's excellent website what things do. Not only does it contain a treasure trove of Crane's work, but it also includes great work by a lot of other cartoonists.