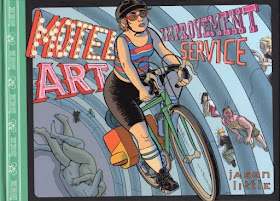 One of my favorite books from the Brooklyn Comics & Graphics Festival is one I have been waiting for since 2004, The Motel Art Improvement Service by Jason Little. This is the sequel to Shutterbug Follies. Both feature a young woman, Bee, as the protagonist and both could broadly be called crime thrillers. The first was a more-or-less straightforward thriller, the latter a bit more episodic and picaresque, like an Elmore Leonard or Charles Willeford novel filtered through an artsy hipster sensibility. But the thing that interested me most about both is that they center around the doings of artists.

Shutterbug Follies had three artist characters. One of them is a young artist with some creepy habits. The other two are much worse--one a murderer, the other a potential murderer. Then in Motel Art Improvement Service, the artist character is a thief and a drug-addict. OK, maybe Little has a thing against artists. But the weird thing is that each of these artists is, in his or her own way, really good. Furthermore, Little has them creating art that is interesting. It's always a problem when comics artists or filmmakers make artists their characters. The "art" almost always looks terrible. (Novelists have it comparatively easier--they can describe the art without having to show you the art.) Furthermore, the art in movies and comics never seems quite believable in terms of milieu. It doesn't ever seem like art you would actually see in a gallery. And when galleries or studios are depicted, they come off as artificial. Much of this is, I suppose, simply lack of familiarity. It's similar to the fact that so many superhero cartoonists can't draw people in suits, as Eddie Campbell observed.

The first thing Little gets right is the kind of art. Two of the artists in Shutterbug Follies are photographers, and one is an installation artist who makes stuff out of consumer items. In the past decade, photographic art and installation/assemblage art have been two of the dominant types of art in galleries, art spaces, and contemporary art museums. Cyrus, the artist character in Motel Art Improvement Service, is a painter--but his approach to painting is very conceptual and very site-specific.

OK, let's back up. Bee is not an art maven. She meets Cyrus completely by accident. At the beginning of a cross-country bike ride, she has an accident... 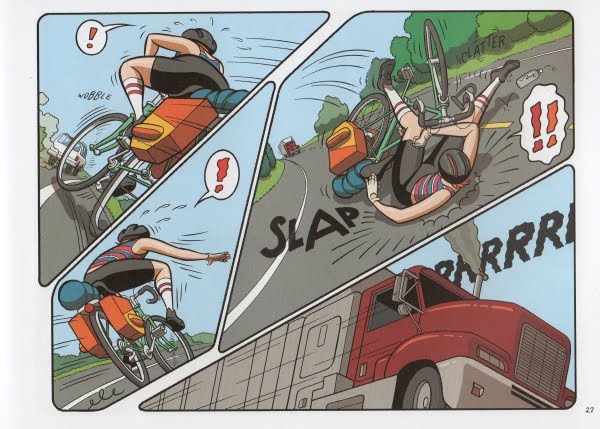 She is forced to spend several nights in a local motel. There, she observes the cleaning man, Cyrus, engaged in some very odd behavior. She finally figures it out. He is taking the bad motel paintings and customizing them. It seems a project a little like Wayne White. White takes cheap lithographs he finds at flea markets and thrift stores and paints on them, adding something (usually words rendered as objects in space) to the original. The difference between White and Cyrus is that White sells his work. These pieces end up in galleries and in the hands of collectors. Cyrus is returning the improved paintings to the motel walls, where he leaves them.

Bee and Cyrus become friends and when Cyrus has finished "improving" all the paintings in the motel where they met, it's time to move on down the road. This time, though, instead of going to a small-town motel, Cyrus leads Bee to a modern airport hotel in Newark. Cyrus gets a job there, and since Bee is bike-less, he helps her get a job as well. They share a room in an unremodeled part of the hotel. 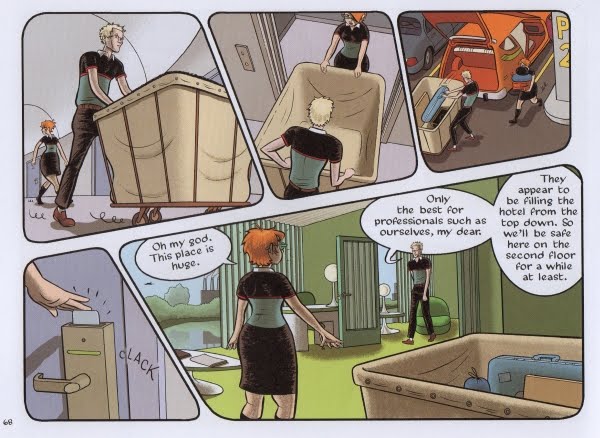 Even though Bee has figured out his painting activities, she still hasn't deduced that Cyrus is a pill-head. While one reason he works in motels is that he can "improve" the paintings, the other reason is that he can steal prescription medicine from the guests. (Interestingly, misuse of prescription medicine was a major plot point in Shutterbug Follies as well.) Cyrus's hobby will feature into another subplot of the book, a slapstick encounter with a pair of college-age ecstasy manufacturers and a drug dealer on leave from the Army. But Cyrus's drug hobby is bound up with his art, as when he tells Bee how he came to start doing his bizarre art project. 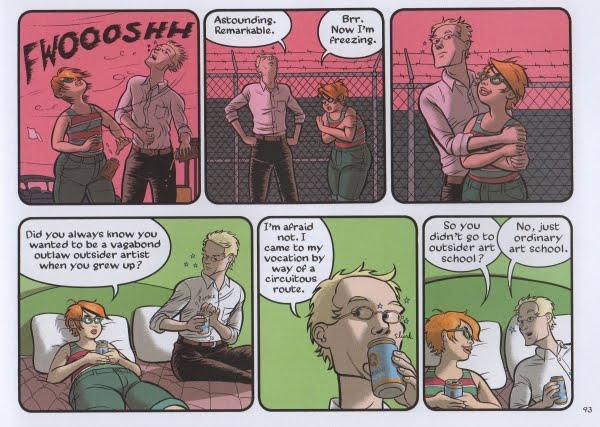 Little employs one of comics' best tricks--the fact that there are at least two possible narratives at any given time, the visual narrative and the text narrative. Usually these are intertwined, but there is no reason they have to be. Cyrus is a proverbial unreliable narrator when speaking to Bee, but the images tell the truth about his life. 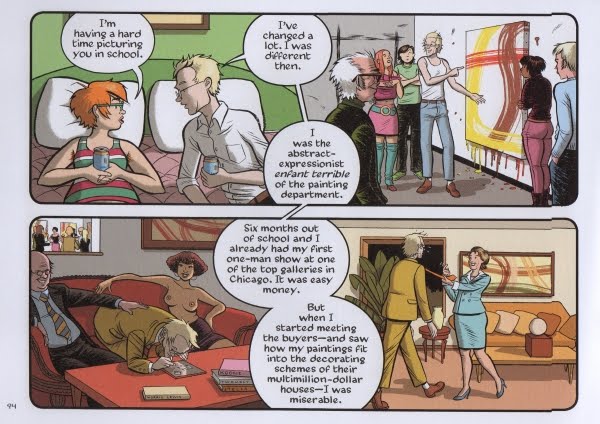 Little also plays a bit with the question of what is an image and what is real. Cyrus and Bee begin a sexual relationship (her first), and in this page, Cyrus sketches her nude. 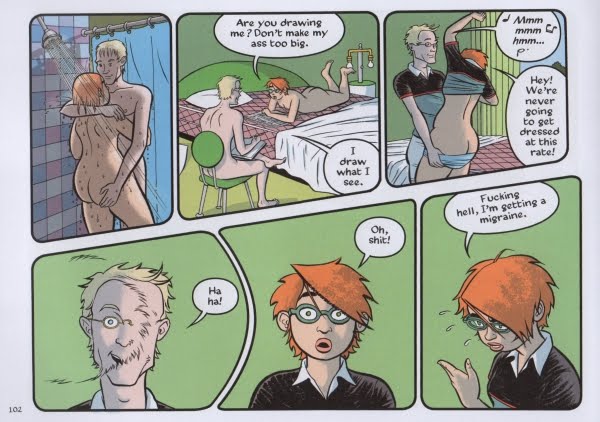 Then later we see one of the motel paintings that Cyrus has altered--he has placed Bee's nude figure within the picture. 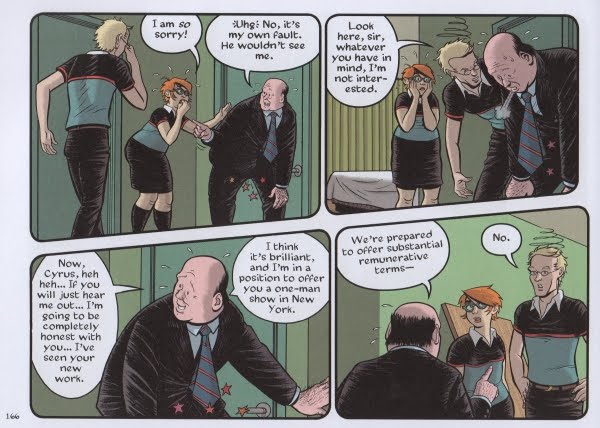 Cyrus's whole endeavor is based on the notion that the work he has altered will be back on the walls of motels, where random travelers will encounter it. It is a deeply uncommercial concept of art. He makes his living working in the motels, nit selling the art. Even if someone notices how strange and interesting the paintings are, they won't associate it with Cyrus. Since the 1960s, there have been numerous artists who have chosen to not make work that can be sold. Some even dropped out of art (in any visible sense) altogether. Some remained involved in art, but in decidedly uncommercial ways (Gordon Matta-Clark, for example). Cyrus explains why he won't engage the commercial art world when he encounters a gallerist who has been pursuing him across the country. 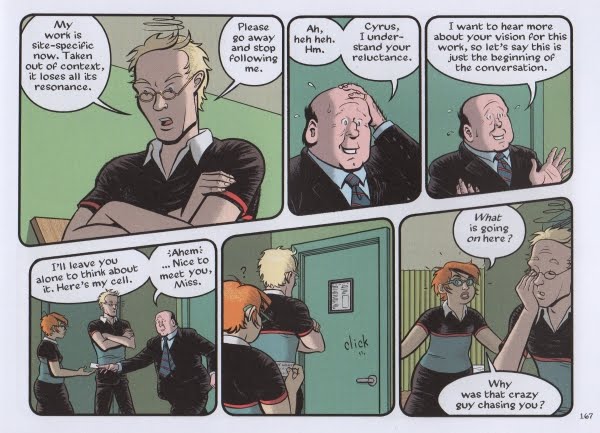 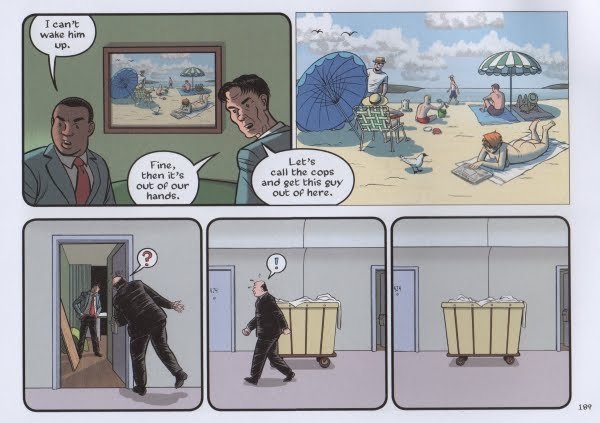 The problem for Cyrus is that if the market wants you, it's hard to not be a part of it. The dealer has been buying Cyrus's paintings from the motel owners. An exhibition will go ahead, with Cyrus's participation or without.

Motel Art Improvement Service is a silly, entertaining adventure. That Little has some interesting observations about art and artists is icing on the cake. I highly recommend it.
Robert Boyd at 11:39 AM
Share