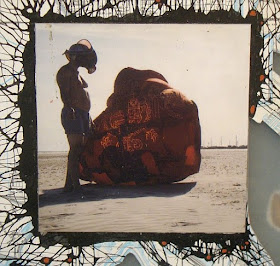 According to Bryan Miller Gallery's press release about this show, Galveston, a suite of works by Josh Bernstein, is about Cabeza de Vaca, the Spanish colonizer who discovered Texas and spent nine years wandering the state and Northern Mexico after most of the members of his expedition died. De Vaca's story is an astonishing tale, an epic odyssey of Europe meeting Native America. De Vaca's account of his journey (variously called The Report and Shipwrecks) is apparently the source for Bernstein's art. But Bernstein is doing something more than just illustrating De Vaca's story.

Most of us who grew up in Texas were required to learn Texas history (I had it in junior high). One of the facts we learn is that De Vaca was shipwrecked (for a second time) in Galveston, where he encountered some Karankawa tribespeople, who enslaved them. So Bernstein's project involved photographing locations in Galveston combined with images of people in costume and other things--inhuman things. That's where it departs from De Vaca. Bernstein seems to have combined De Vaca's story of terror and hardship with a supernatural terror. The terror reminds me of H.P. Lovecraft's terror with a dash of The Narrative of Arthur Gordon Pym. An artist who mined some of the same earth was late underground comix artist Jack Jackson, particularly in the stories The Secret of San Saba and God's Bosom.

For a sixteenth century Spaniard, sailing the Gulf of Mexico and landing in Texas just 35 years after Columbus's first voyage must have been very much like entering a dark and demonic Lovecraftian dimension. And although De Vaca eventually grew to sympathize with the native peoples, his time in Galveston was associated with pure terror--being enslaved by a tribe that practiced ritual cannibalism.

So Bernstein depicts Galveston as a place of supernatural terror. He mixes natives up in it--there are Aztec aspects to Galveston's terror, for example. 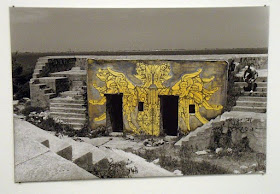 He turns Battery Croghan into a Aztec-seeming structure. The figure on the right has something (tentacles? fire?) coming out of his eyes. 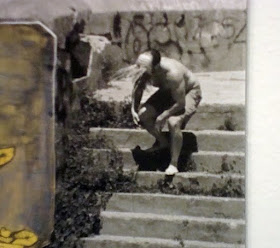 Readers of H.P. Lovecraft might feel that a lot of what underlies his fiction is a deep fear of the other. A racist in his personal life, the horror in Lovecraft's stories was about encountering beings whose motives and very existence was beyond human comprehension. Spaniards encountering native Americans must have had a similar reaction. It took Cabeza de Vaca nine years of wandering among the peoples of Texas and Northern Mexico to start to understand them, to see them as humans and not as incomprehensibly alien. 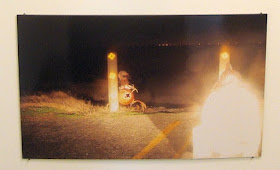 Josh Bernstein, The Thing in the Headlight, silver gelatin print mounted on plexiglass, 2011

Bernstein sets many of his works in what are obviously present day situations. I see this as adapting another favorite horror trope--the rediscovery of an ancient evil that was slumbering in a specific location. Obviously the haunted house is a classic version of this. So here were have some thing--a ghost? a Karankawa deity?--caught on film as if by accident. The overexposed part of the film makes it seem all the more authentic, as if captured on film purely by accident. 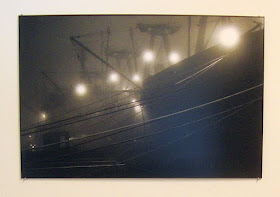 Of course, sometimes a picture doesn't need an implied narrative to be spooky. Night, fog and a few lights can do the trick, as in this atmospheric ship portrait. 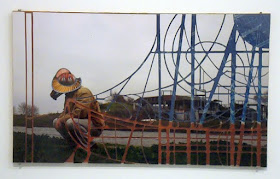 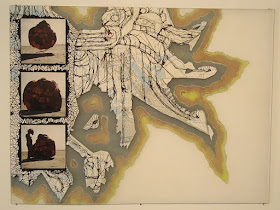