Use Your Illusion at Colton & Farb

This show was kind of a big sprawling mess. Pretty much every square foot of the gallery was used here to display art, often not to its advantage (there was a lot of art shoved into narrow hallways). It was hard to detect a theme or organizing idea in Use Your Illusion, which was curated by artist Paul Horn. But the thing about a big group show like this is that if the whole doesn't work, well, some of the parts might.

What hit me hardest was a gallery mostly full of work by Daniel Johnston. Daniel Johnston is a musician and kind of an outsider artist. For a few years, he was lionized by the alternative rock community, who loved his bizarre-but-heartfelt songs and saw in his mental problems a kind of authenticity. I highly recommend the documentary The Devil and Daniel Johnston. Visual art has always been a major part of Johnston's work. But Horn doesn't just show a bunch of Johnston art. 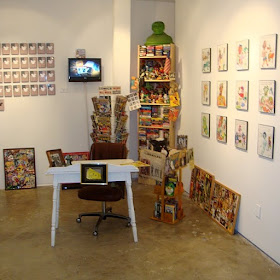 When I showed up at the gallery, Daniel Johnston music was playing. His plaintive voice, singing a song full of longing, was what I was hearing when I walked into this gallery. I almost had tears in my eyes.Seeing all this art and all this pop-culture detritus (from Johnston's home) was a highly emotional experience. (Then the music changed to the Red Hot Chili Peppers and the spell was broken.) 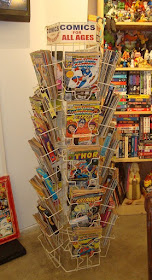 I had a shock of recognition when I looked at Johnston's comic book rack. I had bought many of the same comics from my local UtoteM when I was a kid. (Johnston is a couple of years older than me, so I suspect he did the same--the difference is that he kept them all.) You can see a predominance of Captain America comics here--Captain America is a character who figures prominently in Johnston's work. 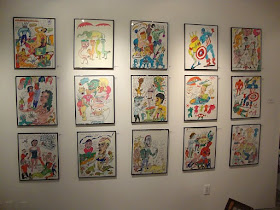 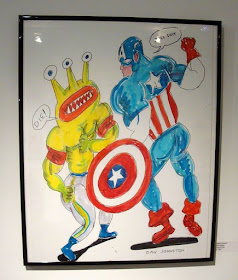 The three-eyed guy also figures pretty prominently in his work. I'm guessing that Johnston has some story about this guy; that he means something in particular to Johnston. For an artist who wears his heart on his sleeve, though, understanding Johnston is not easy. His mind is operating in a different place from ours. But this strangeness didn't prevent me from being very moved by this installation and the artwork here. 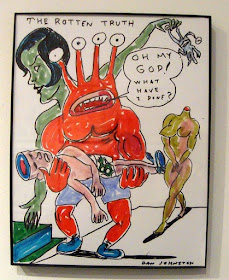 But the crowded gallery issue played out here. In this small gallery that should have been devoted to Johnston alone was this work by John Paul Hartman. 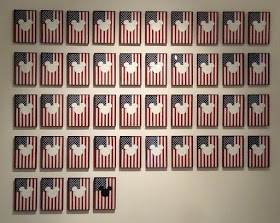 I like Amerimou5e (44); it's funny and clever. But why is it in a room with Daniel Johnston's work? Horn should have edited the show a bit so that unnecessary juxtapositions like this could be avoided. 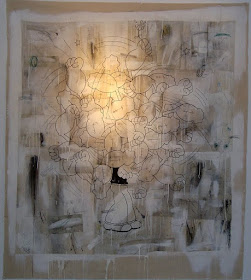 One of the artists in the show is Matt Messinger. I have a gut-level reaction to artists who use comics characters in their work, and it seems like a lot of Houston artists do this for some reason. (The reason I have this negative reaction is complex, and probably deserves its own blog-post.) It's for this reason that I have resisted Matt Messinger's artwork for so long, even though whenever I see it, I like it. Popeye, with his ultra-windmilling arms, done on a surface that looks old and worn, is awesome. I earlier described his work as a combination of Cy Twombly and E.C. Segar, but another comparison I would make is with cartoonist Al Columbia, who draws in a deliberately old-fashioned style on damaged, torn paper.

You might notice this picture has abright yellow area in the upper center. That's not on the painting. One of the annoying things about the hanging of this show is that it was lit by track lights with narrow, strong beams. They tended to burn a "hot spot" in the middle of many of the works, which really shows up in delicate compositions like this one. 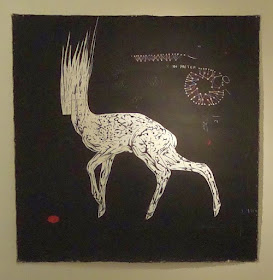 Not all of Messinger's work involves appropriated 30s cartoon characters. He goes deeper into art history for this image--it feels prehistoric.A spooky silhouette of a deer with a human (?) head makes me think of pre-classical Greece and the chimera they created to explain the world. The writing and glyph-like figures in the upper right add to this feeling, and the red spot in the lower left is just devastating.

Another artist who dealt with the "primitive" is Solomon Kane. (I laughed when I saw his name because Solomon Kane was also the name of pulp hero created by Robert E. Howard of Conan fame.) His work in this show consists of maximalist wall reliefs. 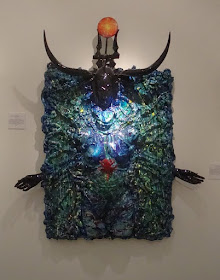 (This is another piece that had an overly narrow spotlight on it.) These highly encrusted works typically involve African masks--in this case, a Baule mask. (The Baule people are a populous ethnic group in Ivory Coast.) He then adds bodies to the masks, using body forms that seem to be parts of shopping dummies. Then the whole thing will be encrusted with stuff and paint. The surfaces are highly irregular, dark but richly colored. 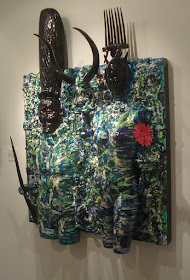 I don't totally understand what Kane is trying to say, but these are such striking pieces visually that I'm not sure it matters. Maximalism is about presenting an overwhelming collection of inputs, which Kane does. Yet despite the super-encrusted surfaces of  these pieces, the whole is never lost. 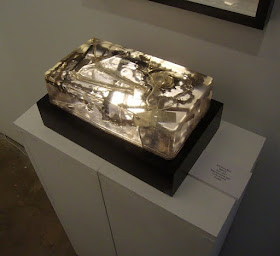 John Bruce Berry has been exhibiting art in Houston since 1965 (!) and, weirdly enough, is a practicing physician as well. (There seem to be several doctor/artists in Houston, for some reason.) I liked these bicycle parts in resin--especially the way they were lit from below. Of course, one thinks of prehistoric insects preserved in amber. One could imagine intelligent beings, scraping carefully on the ruined surface of Earth 65 million years from now, finding one of these and puzzling over it. They have a kind of permanence to them, to be sure. And if you had to preserve one technological object for future archeologists, the bicycle would be one of my own top three choices.

Berry's art was crowded into a hallway, but because it was compact, I could photograph it. Not so with Paul Horn's own work or the paintings of Kevin Peterson. I couldn't get enough distance from their works to take a good photo. Horn's work resembles Kane's in the sense that they both deal with maximalist information overload. Horn's works are dense three-dimensional paper collages, often employing a lot of comics/cartoon imagery--because of this, you can see where he was coming from with a lot of the choices in this show. Peterson paints very realistic pictures of urban, often graffiti-covered spaces with figures of children in the scenarios--specifically well-dressed, prosperous-looking white children. I assume he is going for a degree of irony by posing them in front of gritty, graffiti-covered urban walls. But on a formal level, he is placing a volume in front of a carefully painted flat surface. He plays with this formal aspect even more in Waiting, where a young girl is standing in front of cruddy curb and wall. There are six holes cut in the canvas and sewn open, and the viewer can see another layer, about two inches behind the canvas. I'm not sure it works, but it's an interesting concept.

Not all the work worked. I could have done without Dandee Danao's work. His work really feeds into my antipathy towards artists who appropriate comics. Whatever interest his work has is because of the inherent power of the images he stole. There is no there there. Unlike Messinger's work or Johnston's, the viewer has no feeling that the artist feels anything towards his subjects. It's art barely worth a smirk. 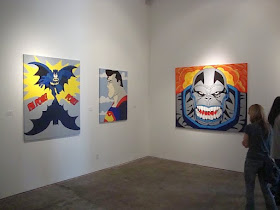 Dandee Danao,Batman, Superman and Apocalypse, acrylic and ink on canvas

(For all you non-superhero fans, the toothy fellow on the right is Apocalypse, a lame X-Men villain.) If the show had left out Danao, all those artists hanging in the narrow hallways could have had a better exhibition space for their work--and the show overall wouldn't have felt so crowded. But that's a small complaint--whatever its faults, there is a lot to like in Use Your Illusion.