Back to the Future - Manifesto-Style

The manifesto is something of a twentieth century phenomenon. Categorically, it's strident, melodramatic, and overly simplistic, but also effective, pithy, and engaging. On August 6, 2011, the Kenmore hosted  Craftism: Preserving the Future of Art a manifesto conceived by Cat Coombes and Edward Lane McCartney.

Their manifesto is all that with a beautiful garnish.


Coombes performs the manifesto below...and you should watch it before you read on.

In case you didn't catch all that. Here's the 5 principles without the font stylings of the original followed by my observations of each maxim:

The content of the manifesto, like all manifestos, is extreme and provocative and not necessarily very practical. The contradictory title "Preserving the Future Art," which inspired the title of this blog, give it an ominous start. If nothing else, it tells you it's reactionary, which is to say fear-based Luddite-ism. The manifesto frames it's argument in philosophical terms, but it's basically a technological one. Those technologies are bad, but these technologies are the ones of art angels.

Woody Allen's Paris After Midnight addresses this same wormhole of an issue when the main character, who is obsessed with Fitzgerald-Hemingway-Stein's 20s, is abandoned by his love interest for her chance to live in the La Belle Epoque, with which she is obsessed. (The grass is always greener in the past.) 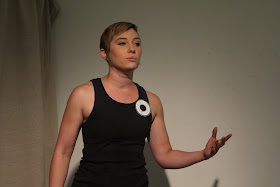 I'm not sure I believe that they whole-heartedly subscribe to the tenets of the manifesto as they chose to make it into a performance art peace. Plus, who hasn't made a few heart-felt declarations that one reconsidered a week later?

The recitation of the manifesto by Cat Coombes is excellent. I'm not sure when I will release my "Art Blogging in Houston" manifesto. But when I do, you can be damn sure that I'll try to get Cat Coombes to deliver it and Edward McCartney to fashion me some bling...for a very steep fee I'm sure.