Jammin' at the CAM with Schneider and Tossin

The Contemporary Arts Museum Houston (CAMH) does many things well, but one of my favorites is their Slide Jam series. On Thursday, September 22nd, the CAMH started up the series with Carrie Schneider and Clarissa Tossin.

The two presentations run from 6:30 to 7:30 p.m. and the CAMH's new curator, Dean Daderko, started the jam promptly at 6:30 p.m. as the audience continued to trickle in. 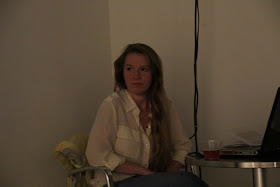 As I listened, I became aware that the her presentation--and her art--were all about inventing personal ritual. I'd like to take credit for that insight. But since she overtly stated the theme multiple times during the presentation, I can't credit this insight to any personal powers of deduction. This approach emerges in the first phase of her oeuvre in projects such as

These works are very personal, very Carrie-centric. The audience can observe them and draw emotional and aesthetic parallels from their content, but they can't inhabit the work.

The second phase of her work uses the same approach of "inventing personal ritual" with one exception. The focus of  "personal" shifts from the artist to the audience. In works such as

and Hear Our Houston, (This show opens at Project Row on October 15, 2011.), the audiences supplies the art.  Schneider constructs the ritual. The audience inhabits it so that each individual act of ritual becomes dots in the metaphorical pointillist construction of these projects. Due to this shift in focus, her second body of work becomes both inclusive and risky, crowd-sourced and crowd-controlled. This maturation as an artist take it from sympathetic to empathetic, which is one giant leap. 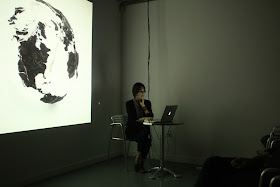 Tossin is originally from Brazil. She came to Houston by way of the Core Program and participated in their 2011 show. Her work centers around her home town Brasilia. For the geographically inept, that means nothing. For the geographically savvy, it translates to Utopia. Actually, she never used that phrase but her presentation on her works on Brasilia made it abundantly clear.

Let me explain. In the 1950s, The Brazilians decided to move the capital from Rio de Janerio to the geographical center of the country. Lúcio Costa served as the principal urban planner and Oscar Niemeyer served as the principal architect. Together they oversaw the construction of the city from 1956 to 1960. Think of a master planned community without a neighboring metropolitan area, whose infrastructure it could leech off of and whose population it could exploit for cheap labor. All of that had to be built or brought in.

That's Brasilia: a utopia, an idyllic city, perfectly planned. Tossin's work chips away at that concept. In White Marble Everyday, documents the "behind the scenes" labor and raw materials that go into the 4 hour daily cleaning process of the Brazilian Supreme Court. The workers start at 6 a.m. and are gone by 10 a.m. when the civil servants and tourist arrive. The workers completion and evacuation before the building opened gives the public an illusion of sustainable fantasy, which is Tossin's target.

In By Foot, Tossin illuminates another flaw in the master planning of Brasilia. She publish satellite photos of walking paths between highways. Being a city of the future, Brasilia is designed for the car but it's the working class on foot that keep it moving. The other works in this series consist of her drawings of the paths. She walked each path and used the number of steps to entitle each piece.

Another work, Monument to Sacolandia is a performance piece that highlights the workers that built the presidential palace, Palácio da Alvorada. The workers’ camps was constructed out of used cement bags in a valley below the palace. The camp was called, Sacolândia or Bagland. In 1959, the government flooded the valley to make a lake and the worker population was relocated to the outskirts of the planned city. In the video, Tossins raft floats on Paranoá lake over the old camp with the palace's gardens as backdrop.

Unmapping the world attempts to reclaim the configuration of geography by the powerful who have mapped the world and thus defined its boundaries.

Tossin has several other projects that present the human aspects of Brasilia in contrast to its facade of modernist purity. But for Houstonians, we can read this more universally--many of us work in gleaming modernist and post-modernist office towers or campuses. We show up for work to a clean office, with well-manicured landscaping. We rarely have contact (unless the elevator breaks) with the small army of workers needed to keep these places functioning. Ditto our curvilinear ferro-concrete freeways--do you ever notice the city employees whose job it is to clean dead animals off the freeways? In this way, Brasilia is Houston, is Los Angeles (which obliterated the Hispanic neighborhood of Chavez Ravine to build Dodgers Stadium in 1959), is many other cities. There is a particularity and a universality in Tossin's work.

(All photos of art work are from the respective artist's website.)