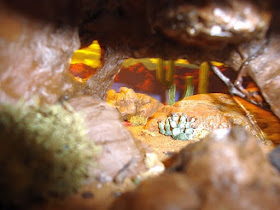 These boxes by Dante Brebner at Muriel Guepen Gallery had a lot of people bending over into uncomfortable positions to look inside. Extremely plain from the outside, on the inside they have elaborate dioramas. 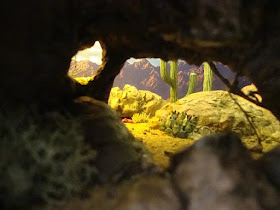 Some booths had so much colorful artwork that they transcended the "white cube" effect. Mindy Solomon Gallery from St. Petersburg, FL, was one of those.

Amongst the extremely colorful art they showed was four paintings by Sean Noyce. I liked these paintings as soon as I saw them, and even more when I saw the video that Noyce had made about them. Check it out--it shows the paintings in progress and how he made some of the artistic decisions he made. 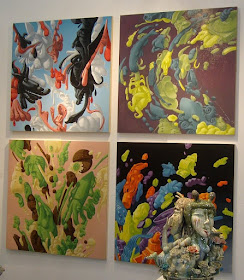 
Color grabs you. I'm sure that idea goes through the minds of some exhibitors as they plan to compete visually with everyone else. So we see work like this: 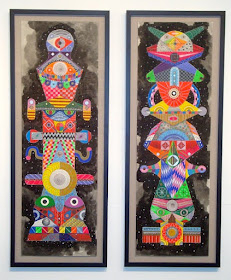 I think one can see the influence of Ben Jones in Michael Velliquette's colored-paper collages. Appropriate (and very enjoyable) work for a trendy gallery like DCKT Contemnporary. 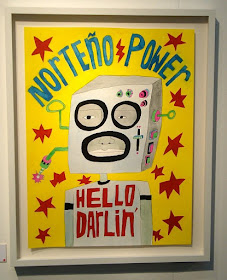 This intensely-colored piece by Cruz Ortiz (David Shelton Gallery) was a bargain at $975, and it had a triumphant red dot next to it. (I wonder if $975 is a more psychologically attractive price than $1000?)

(Another thought--both here at at the Houston Fine Art Fair last month, San Antonio galleries were really well represented, especially compared to Austin. Why is that?)

One of my favorite artists, Gary Panter, had his own color-bomb up at Fredericks & Freiser. I have two Gary Panter drawings, but I have always loved his paintings (I included one in the first show I curated, Misfit Lit at COCA in Seattle, 1991). This is typical--he puts a pattern (stripes, plaid, etc.) down then paints things over it.Fredericks & Freiser also had several John Wesley paintings, which I quite liked.

But not everything was colorful and bright at this fair. Kopeikin Gallery from Los Angeles specializes in photography, including single dramatic images like this one by Jeffrey Milstein. 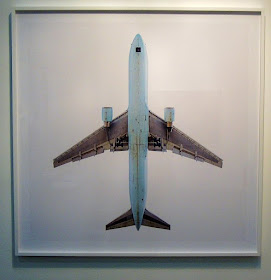 This image of a jet is startling because it's taken from an unexpected angle. Is it art? Sure, I guess, but mainly planes are cool. 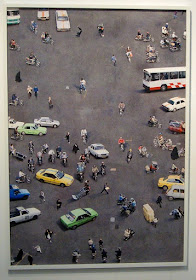 Katrin Kurfman, picture of a square

This photo by Katrin Kurfman (I think--now that I am Googling her name, I'm finding nothing) actually makes you wonder if what you're seeing is real. It may be a culture-specific reaction. In the U.S., it's impossible to imagine a seemingly uncontrolled mixture of cars, motorcycles and pedestrians--with no lines painted to separate them. The uniform greyness of the ground makes them appear as if they are all floating in space.

How different it is from this desolate photo. 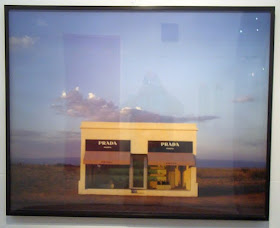 This photo by James Evans was displayed at the Ballroom Marfa booth. It is an amusing tweak of the artworld. I'm sure it gave folks at this fair a chuckle. Perhaps less so in Marfa, where the median income is $37,616 (compared to a national median of $51,425). The typical person in Marfa is far more likely to be buying second-hand Dickies than Prada.

Ballroom Marfa also had this beautiful piece of craftsmanship by Matthew Day Jackson. 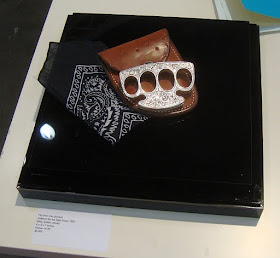 I wonder if Ballroom Marfa is familiar with this section of the Texas Penal Code:

Sec. 46.05. PROHIBITED WEAPONS. (a) A person commits an offense if he intentionally or knowingly possesses, manufactures, transports, repairs, or sells:
[...]
(6) knuckles;

and
§ 46.01. DEFINITIONS. In this chapter:
[...]
(8) "Knuckles" means any instrument that consists of finger rings or guards made of a hard substance and that is designed, made, or adapted for the purpose of inflicting serious bodily injury or death by striking a person with a fist enclosed in the knuckles.

Just like the Houston Fine Art Fair, there seems to be a theme of money in some of the art in this show. Why? Cartoonist Jay Lynch had a theory that went like this--you get what you draw. If you draw peasants eating potatoes like Van Gogh, you are doomed to be poor. Chris Crites is pretty much guaranteed to get arrested. So if your subject matter is money--even if you are "critiquing" it--I say money may head your way. I'm surprised more artists don't draw money. 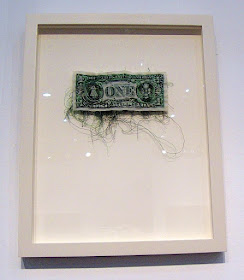 Lauren DiCioccio lovingly embroiders money. Expanding on the Jay Lynch theory, the amount of effort and craft she put into it should lead to a big monetary pay-off. I wonder if Jack Fischer Gallery sold this piece at the show. 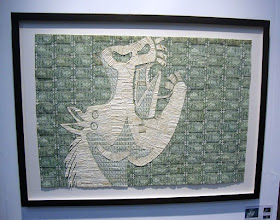 Ray Beldner (at the Catharine Clark Gallery) seems to have kind of a mixed attitude towards money. He's quite willing to trivialize great art with money (which really puts art in its place), and obviously he is willing to sell his art for lots of money at a commercial gallery, but he has to be such a downer about corporations. If someone buys this piece, you want to know how they got their money? Corporations.

But his next piece is a perfect illustration of the Lynch principle. 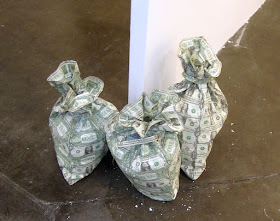 "You get what you draw," baby! Or sculpt in this case. 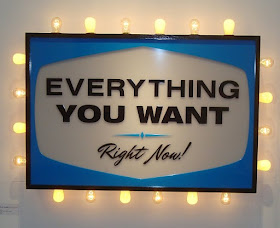 Steve Lambert cuts to the chase by not being specific. If you get what you draw (or sculpt or whatever), he gets it all. Wouldn't this look great on the wall of some hedge fund manager? I think so.

Out of space! To be continued in part 4