At this point, you must be asking yourself--what else is there to say? Not much, really! But I still have a little more...


The Worst Piece of Art at the Fair


Boy, there were a lot of worthy contenders. But my personal "favorite" was a piece so bad it took two artists to make, Tim Berg and Rebekah Myers. 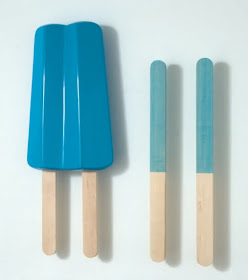 This giant dumb thing was actually an edition of 20, and you'll be delighted to know that one of the three that Dean Project had with them had already sold by the time I snapped this photo. Congratulations Dean Project! You came down to Houston and really pulled a fast one on us slow-talkin' rubes.

It's Not All Eye Candy

OK, I've kind of been misrepresenting the fair. All the work I've shown you has, for the most part, been visually arresting in one way or another (ie, "eye candy"). And I include in this description work I liked and work I hated. The thing here is that if you are going to travel from New York or Los Angeles and pay $10K for a booth for three and a half days, you need to show art that grabs people by the lapels and says "Look at me!" So whenever someone eschewed that strategy, I noticed. 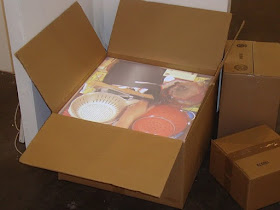 I thought this piece by Asya Resnikov was very clever and likable, but it was entirely possible to miss it at the Nancy Hoffman Gallery booth. I literally mistook it for some unpacked boxes when I first walked by. 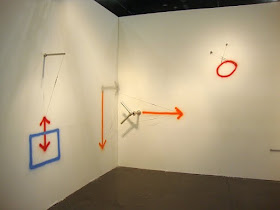 Peter Soriano did these pieces that look like builder's markings on in-progress construction projects. They look like a code where a foreman in instructing a plumber that some piece of plumbing will go here, and something else will go there, etc. And the hardware is installed right into the walls of the booth, and the spray-paint likewise painted on the booth. When they took this booth down, the artworks presumably were destroyed. Physically destroyed, anyway. Whereas Dean Projects was giving Houston collectors a giant shiny sculpture of dessert, Lennon, Weinberg, Inc. were practically daring Houston collectors to move way out of their comfort zone. And it was an all-in bet--Soriano was the only artist they were showing, as far as I could tell.

Austin artist Andy Coolquitt had this amusing piece of trash sculpture. I'm sorry to say I can't remember what gallery was showing this piece, but they were smart--the put it across from a giant Coolquitt installation. 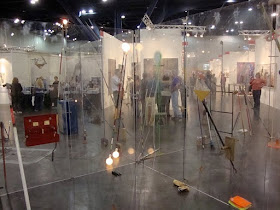 It's hard to convey the feeling of this installation, Plus Sign by Andy Coolquitt, in a photo. It is a big "X" made out of plexiglass, surrounded by pieces of random junk, including a crumpled pair of pants that I almost kicked several times as I walked by. This being an art fair, I guess if someone had named the right price for this, they could have bought it. But actually, that wasn't the point, believe it or not. TCAF (in collaboration with some local art institutions) commissioned a bunch of "special projects"--installations to be shown at the fair. In this way, they veered towards being a museum and away from an art fair. And obviously, because these were not pieces that some gallery had to sell, they didn't have that requirement to be eye-candy.

An art fair exists to make money, so I am always looking for an underlying commercial motivation for any action they undertake. Here's my theory about the special projects. As you will recall, TCAF spun off of the Houston Fine Art Fair when director Max Fishko had a falling out with former employer Hamptons Expo Group, the people who run the HFAF. So he knew his fair would be the second fair. In strategy class at business school, you always learn about the "first mover advantage." All things being equal, the first mover into a marketplace will have a huge advantage over all subsequent entrants. What this says to "second movers" is that they have to work hard to differentiate their product from the first mover's product. It has to be both different, and if possible, better. The iPhone, for example, wasn't the first smart phone, but it succeeded because it was so distinct and so much better than the Blackberry.

So Fishko and his team have worked to make TCAF really distinct from HFAF. And I'd contend that including all these special projects made it better in one way than HFAF. They brand the fair as an art fair that is not 100% focused on commerce. That seems like smart branding to me. 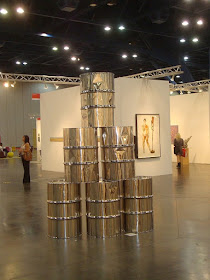 Jason Willaford, Out of Site - Out of Sight, chrome plated oil barrels, 2010

Jason Willaford's Out of Site - Out of Sight is an ironic work. On one hand, it is sort of a protest against oil. But on his website, he asks this question: "Would it be easier to chrome our filth ,so it mirrors it's surroundings making it out of sight , or should we embrace the opulence of our accomplishments ?!" The funny thing is that I could see this sculpture in the lobby of an oil company. 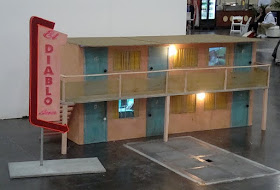 Tracey Snelling's El Diablo Inn was a realistic diorama of a seedy motel, where in two of the windows there were videos playing depicting what was happening inside. I'm not sure what the videos were, but I think one of them was a scene from the remake of Psycho. The other one was a sex scene. I liked the piece a lot, but I wish iy had been on a table--it would have been easier to see. 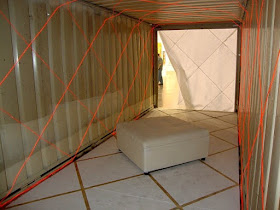 Ariane Roesch had a huge installation that you could walk into and hang out for a while, away from the crowds. She used her trademark material--EL wire (which I think will replace Christmas lights eventually).

So in the end, was TCAF successful? I didn't attend the show on Sunday, so I wasn't able to ask the gallerists nosy questions about how well they did. That said, I saw a lot of red dots. I think this may reflect that the art here was generally less expensive than the art at HFAF. There were fewer major names, more emerging artists, and the work was priced accordingly. Even excluding the $5 paintings at the Rice Gallery booth, you could easily walk out of this fair with art under your arm for less than $1000.

Max Fishko was quoted in CultureMap as saying that 10,000 people "walked through the door" during the show. I'm dubious--Saturday didn't seem nearly as crowded as Saturday at HFAF. And even if it's true, how many of them paid to get in? I had my press pass, but I also had four free VIP passes given to me by various people and institutions. I tried to give them away but everyone I offered one to already had one! TCAF had flooded the Houston art scene with free passes--wisely I think.

I think a lot of people on the scene have warm feelings toward this show because the local nonprofit art scene was courted heavily by artMRKT. Again, this seems like part of the strategy to brand TCAF as something different from HFAF. Glasstire, which had a great booth/saloon set-up, drooled all over the show--a live blog and a generally positive assessment from Laura Lark (she was somewhat less kind to HFAF). Even a piece by Sarah Fisch called "Texas Contemporary Peeves and Qualms" was positive. I don't think any of these pieces were less than sincere, but I also get the feeling that they were courted pretty hard by artMRKT.

And even if they were, so what? TCAF was a nice show. It was full on art that I liked. It had a bunch of nice installations. And apparently it was successful. What does that mean? I guess we'll have two art fairs again next year.