Among the artists and art scenesters of Houston, there is a feeling about Artcrawl of "why bother?" The art that gets shown in the spaces in the warehouse district is not all that interesting (your mileage may vary, of course) and tends to feel the same every year. Even a good artist like John Runnels shows the same pieces every year.

But Artcrawl, like the Bayou City Art Festival, is important. It's one of the few times each year that a LOT of Houstonians get out to look at art. And Artcrawl has some advantages over the Bayou City Art Festival--the art is mostly by local artists at Artcrawl, and it has an altogether grungier, more bohemian aspect to it. Not only that, you can hear live music at the Last Concert Cafe... 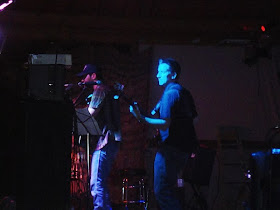 Or in other nooks and crannies along the crawl, such as Atelier Jacquinet... 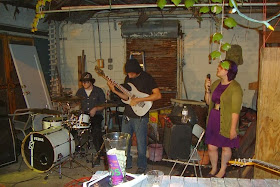 The disadvantages are obvious--when you see so much artwork at once, you get art fatigue. In a rush to get through, you might overlook someone who'd doing good work. And there are problems with the crawl--some of the venues are really far away and hard to get to, especially if your energy starts to flag or you run out of time.

Anyway, I started at The Foundry, a group of studios north of I-10 just under the Elysian Street Viaduct. I always start here because they let UH students show work, which means that there is often something fresh--at least something you didn't see last year. 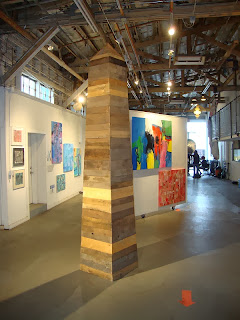 I don't know what the name of this piece by Daniel Adame is, but I like the idea of making an obelisk out of old crappy weathered wood planks. 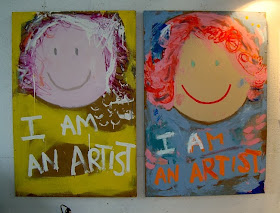 These two self-affirming paintings by Tangerine Williams made me laugh. I love the combination of the blunt statement (a statement one would only make if one weren't really all that sure) with the simple child-like smiley-face portraits. Indeed, the smiley faces are almost something a teacher would stick on your test when you got a good score--another affirmation. And what's most funny is that there are two of them. I'm not sure how much irony is here, or if this was the result of a long dark night of self-doubt. Either way--I like them. 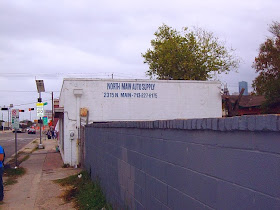 Then I went to North Main Auto, which appeared to be a new entry on the Artcrawl map. But there was not much there--apparently they were going to have a party later in the evening, but for now it was an empty, abandoned store with one piece of artwork sprawled in the corner. 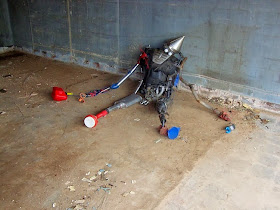 The piece is apparently by Bobby Kaloor. As for the space, the story I got was that Avenue CDC was trying to get the owner to let them have it as a community art space. But the guy I talked to admitted that this was unlikely. Even though it has been empty for years, there are great expectations for increased real estate values once the North Line light rail is finished and the Quitman station opens. 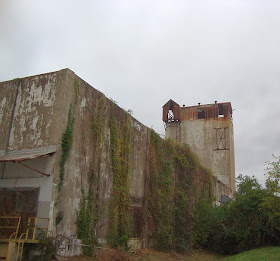 I knew nothing about the Silo when I drove out there. It took me a while to actually find it. It's in a highly industrial neighborhood on Clinton just north of the ship channel. (Weirdly enough, just south of Clinton from it is a tiny residential subdivision, As I was looking for the Silo, I drove into this subdivision, where I witnessed police handcuffing some poor schmuck. Lovely neighborhood.)

Finally I realized that the Silo was the decrepit-looking building that I had thought was abandoned as I drove by. I parked next to a food truck--delicious barbeque smells were coming out of it. I went inside to this big dark warehouse. It was quite cluttered. To my right was a room closed off with a hanging black curtain--a sign next to it announced a schedule of films being shown through the day. Apparently a film was being showed at that moment. I didn't want to interrupt, so I continued to a lighted office that had this sign on the outside: 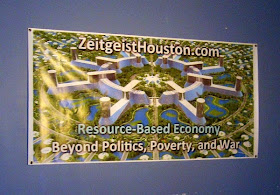 I went to into the office, where two guys were huddled around computers. I said hello, and they responded amiably enough but didn't offer anything beyond a greeting. On the walls were several bad paintings with ridiculous prices on the labels beneath them. I checked out the website later--it is kind of a utopian techno-communist movement. Later that evening, I was having a conversation with someone who suggested we could get by without money through some system of volunteer labor. I asked him if he would volunteer to work in the mercury mines. I guess the Zeitgeist people would say, robots would do all the mercury mining while the rest of us only do work we felt passionate about. Sign me up!

I then went outside into one of the two courtyards. With the high concrete walls, this part of the Silo looked like a prison, but the abandoned nature of it gave it kind of a Mad Max vibe--which was accentuated by the junked remains of old art cars that littered the yard. 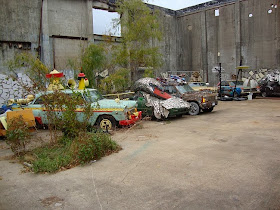 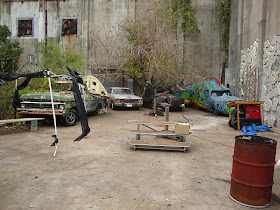 And the complex was big--there were a couple of large courtyard-type enclosures and a big paved back area--all filled with rusty old art cars. 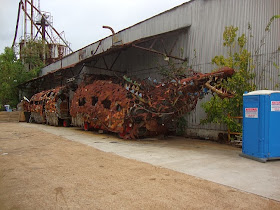 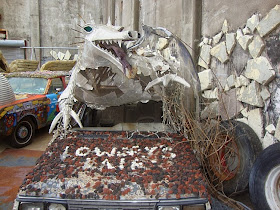 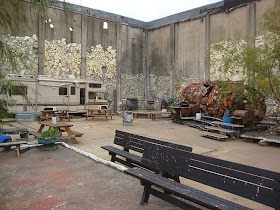 As I wandered through this wasteland, I only saw one other person, who looked just as perplexed as I was. The whole time I was there, the facility was being buzzed by a helicopter. 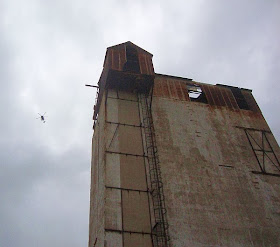 So what is the Silo? They have a Facebook page which isn't terribly informative. Later that night, as I was telling someone about the Silo, a young woman interrupted and said she had been to raves there in the past.

After that, I went over to Commerce Street, where there were a few studios open. One was the Gribble Stamp Warehouse, where Sketchy Neighbors had a show up. As I understand it, the studio they were using belongs to artist Joseph Blanchard. He and Sketchy Neighbors had a show up on the theme of time travel-- which wasn't all that obvious. What was obvious was that all the pieces were doors of some kind. 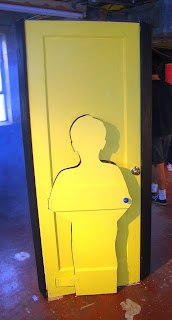 a piece by Joseph Blanchard 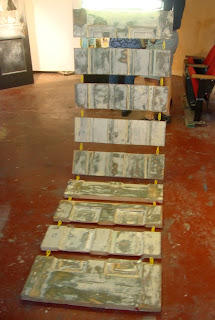 Next stop was Diverse Works, which has a show up that I didn't think much of. See Dean Liscum's review--he was a little more gentle than I would have been, but basically we're on the same page. In the same building is Howard Sherman's studio, which was open that evening. 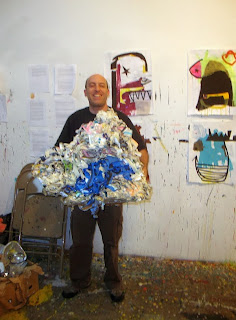 That's Sherman with a giant mound of tape, blinking his eyes.

I crossed under I-10 into the belly of the beast, the central studios of Artcrawl.This is the part that art scenesters hate the most--it's crowded, parking is difficult, etc. I swept through Mother Dog Studios and didn't see much new (that said, I think there are a lot of good artists at Mother Dog Studio). Then I went into the studios that are catty-corner to Mother Dog. I'm not sure what they are called, but it's always a crowded madhouse in there. There is too much art to absorb, and most of it is terrible. It's nice when you come across pieces that seem restful and uncrowded, like these three by Alex Wilhite. 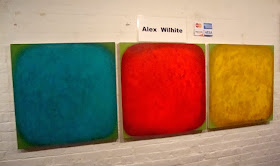 But that was an oasis in the desert of visual clutter.

Next to these studios is Cardoza Gallery, site of a recent Mark Flood exhibit and formerly known as the Temporary Space. Chris Cascio had some paintings up in a back room.

I liked the one on the right enough to buy it--my sole Artcrawl purchase. I thought that'd be my last art purchase of the year, but Art Palace is having its own "Black Friday" sale which looks like it may be too good to pass up.)

I then hit a couple of more studios in the neighborhood, but nothing caught my eye. However, I ran into several people I know, including a friend from B-school who I haven't seen since school. He works here in town for a major French bank and told me that all the traders there had been laid off that week. But he was felt pretty secure and had decided to come out and check out the art. This might have been his only art event of the year, for all I know. I hope he checked out Chris Cascio's art, and Sketchy Neighbors, and FotoFest (which has a great International Discoveries show up) and Box 13--which all had some of the best work at Artcrawl.

I ended the evening at Box 13, whose Dutch Invasion show was both excellent and sparsely attended. But it will be up for a while, so you still have a chance to see it. There were a few other East End studios I missed--but by the time I got to Box 13, I was pooped. Maybe next year!