Moving toward the Office Light

If someone utters that phrase to me in the context of Houston's art scene, I think of Dan Flavin's installation at The Menil's Richmond Hall or James Turrell's The Light Inside at the Museum of Fine Arts, Houston.

If someone utters that phrase to me in the context of work, I flashback to a windowless office I used to occupy in which even the plastic plants wilted.

In this context, it's actually the medium in Curt Gambetta's Office Light showing at the Lawndale Arts Center from November 18, 2011 through January 7, 2012.  The installation in the Mary E. Bawden Sculpture Garden is twelve 2' x 4' LED office lights in a ceiling grid with a perimeter of 18' x 28'. The structure has a height of 6' which causes the bottom of the light boxes to hover approximately 5 1/2' above the ground. 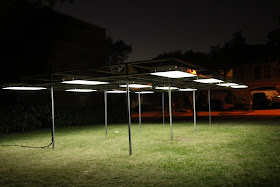 This design repels most viewers, causing them to skirt the installation. 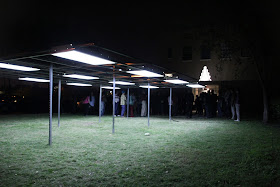 However, some viewers move toward the office light. 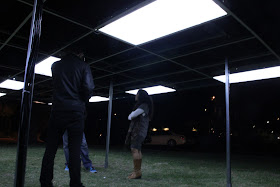 The light sculpture crowds out the cosmos. It illuminates those that inhabit its space. Man-made light sources dominate the nocturnal urban landscape. The light leaks, pools, seeps into the furthest corners of the city. Halogen halos line the streets and form islands in parking lots. Walls of fluorescent light spill from empty office buildings and saturate the side walks and side streets. The artificial light is ubiquitous. It pervades the predawn hours of the sleepwalkers and night workers.

As a "profoundly ambivalent medium of Urban experience" (to quote Gambetta), artificial light has become part of the mythology of modern life like a jet plane's shadow passing over us or an ostensibly profound revelation transmitted by our radios as they automatically scans the stations. 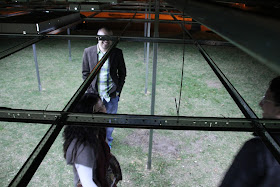 We don't know if they are ominous or auspicious, and we're left contemplating our own luminescent blue aura and it's meaning.