Back on November 18, the Joanna opened their latest show, Dis, Dat, Deez, Doz. I'm not sure if it was a one-night only thing or if it's going to stay up. Hopefully the latter. It was a great, if somewhat overwhelming, show. Art was crammed into every nook and cranny.

One piece that stood out was the sculpture by Exurb. The piece, whose name I can't remember (and which hadn't been finalized by the members of Exurb on the night of the show), consisted of four movie projectors (three 16 mm and one 8 mm) each projecting four film-loops onto four panes of glass and a white screen behind the panes of glass. 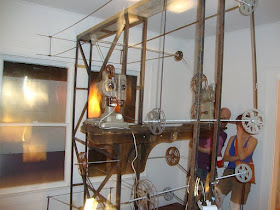 The films had been discovered on eBay. They were all vacation films taken in the 60s, as far as Exurb could tell. They were projected onto the somewhat dirty windows in a back-facing room at the Joanna. About three or four feet behind the windows was a fence with a white sheet on it to act as the screen. The plane of focus was set for the windows--the "screen" was just a blur. But because the windows were pretty dirty, you could see the content of the films quite well on the windows,


Their last big piece, Input/Output, involved combining old technology (vacuum tubes) with modern technology (digital imaging). This time around, they stuck with ancient technology. Also, this time they didn't build the device from scratch. The projectors are manufactured objects. The only tweak they made was to not use the take-up reel but instead to build large tape loops.

Of course, there were technical problems with the loops that had to be fixed on the fly. 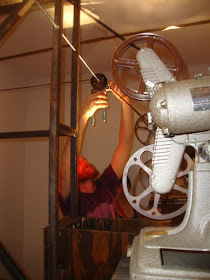 Patrick Renner tightens a bolt on a film loop reel 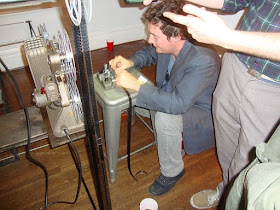 I had recently seen Free Radicals: A History of Experimental Film when I saw this show. I had also seen the Stan VanDerBeek show at CAMH in May. Obviously I couldn't look at Exurb's new work without thinking about the various innovators of underground film. But they were doing their experiments in the 60s (or earlier). So Exurb, both in the choice of films they used and in the choice to use film at all, were dealing with nostalgia. There was a time when the clackity-clack noise of a film projector signified modernity--now it is quaint and old-fashioned. The whole notion of experimental film (as opposed to video) is old fashioned. And I think this idea of looking back with longing, or nostalgia, is embedded in the work.