The show up at Fotofest right now, International Discoveries III, is full of interesting and sometimes quite powerful photos. (The photos of Dana Popa are especially rough sledding emotionally.) The show is quite large--you really have to explore every nook and cranny of their building. Two of the photographers I really liked were Francesco Giusti and Julia Curtin. 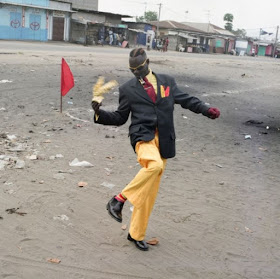 Giusti has a series of photographs of members of Société des Ambianceurs et des Personnes Élégantes (SAPE). This is a club in Congo of men who devise these crazy elegant suits for themselves. Each one "has his own repertory of gestures that distinguish each one from all the others." 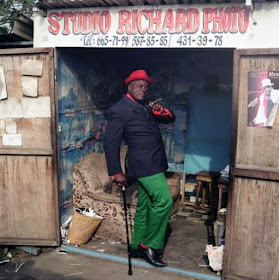 What appeals about these photos is the the outfits, the over-the-top dandyism of them, and the contrast between them and the relative shabbiness of the settings. I often feel that there is something silly about dandies, but I see the point here. They create a tiny bubble of elegance within an environment lacking in elegance due to its general poverty. Maybe that is the right way to think about dandyism. A dandy creates his own reality, which may be quite at odds with the reality of his everyday life and environment. That difference may not be physical--it could be a difference in attitudes. It's quite the opposite of people who pride themselves on their gritty authenticity--and the question is, is one attitude (dandyism) any better or worse than another (authenticity). Or, to put it another way, is a dandy less authentic than someone who wears his authenticity on his sleeve? 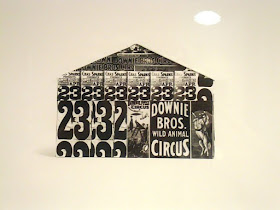 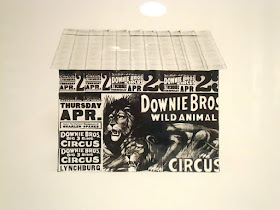 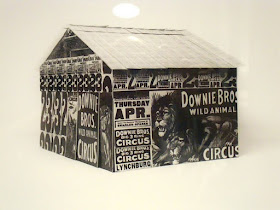 Julia Curtin used modern technology to look at old photos, specifically photos of sharecroppers shacks from the depression. As far as I can understand, she took the photos, which were taken at 3/4 views of some type, and reconstructed what each side would look like using computer software. Then she created these images, which could be used as plans for reconstructing these previously un-planned, vernacular buildings. I'm not sure why this appeals to me so much, but I really liked them. In a way, I feel a little guilty for liking them. They take photos that had powerful social content and turn them into architectural abstractions. And maybe that's what you are supposed to think about--how images can bring you closer to a social or political or psychological reality or pull you away from it, depending on the approach taken by the artist.

The show as a whole is quite good--well worth checking out.