A Tree Grows at the Brazos

Brazos Bookstore used to be my favorite bookstore. Its selection was uniformly excellent. It had the best selection of art books in town. (Now I'd give that honor to the MFAH bookstore.) And they had for a while an exhibition space, Brazos Projects, that had some amazing shows. My favorite was the Joe Brainard show in 2005. But in 2006, owner Karl Killian was hired by the Menil. Rather than let the Brazos go, some moneyed customers bought it from Killian. The problem, in my view, was that what made the Brazos Bookstore a great bookstore was Killian himself. An independent bookstore is in some ways a curatorial project, and Killian was a great curator. The present owners are not.

This is not to suggest that the Brazos Bookstore isn't a fine bookstore. It is. But it's been a long time since I felt real excitement walking in there. But I felt some of that old excitement today. 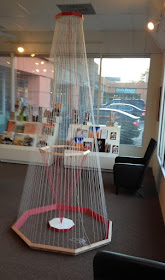 The front part of the store was partially cleared away and this sculpture had been installed. The artist is Samuel Wukusick, about whom I know little. His website indicates that he is primarily a painter and has been in a couple of group shows in Houston since moving here from Ohio. 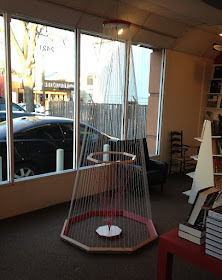 I don't even know if "string tree" is even the real title--that's just what the cashier called it. It's apt, though. The piece is clearly meant to be an abstraction of a Christmas tree. I like the upside down "string tree" that is inside the right-side up one. The shapes seem conical when you look at them at first, but then you notice that the base of each "cone" is an octagon. (Maybe Wukusick is a fan of ultimate fighting.)

As an installation, what I like about it is that inhabits the space without preventing the space from doing what it is supposed to do. Usually when you see art in a commercial, non-gallery setting, it feels tacked on, like it doesn't really belong. The paintings you see at certain restaurants and coffee-shops, for example. I don't find these to be venues conducive to looking at art, but I think the reason I feel this way is that the art rarely works in concert with its environment. With Wukusick's tree, it did.

I hope this is the start of a trend for the Brazos Bookstore. I understand that this was a seasonal decoration, but it also was an installation handled with real sensitivity. If they could do it this time, I see no reason why they couldn't accomplish the same feat again.