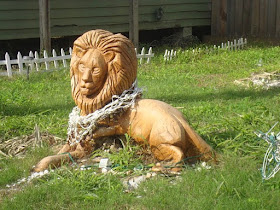 I've discussed the tree-stump carvings in Galveston in a couple of posts in the past. In brief, Ike killed some 4000 trees on the island, and three wood carvers decided to turn some of the stumps into sculptures, such as the one above. I just got a new car yesterday and decided to drive down to Galveston for a shake-down cruise. As I drove aimlessly through Galveston's streets, I kept my eyes open for tree stump sculptures. I found a few, and it occurred to me that a Google map of them would be useful. So I have started one:

Now there are at least 35 of these sculptures. So my plan is to add to this map on subsequent trips to Galveston. And if any of you readers want to add to the map, be my guest. Ultimately, I'd like it to be a useful resource for folks visiting Galveston, exploring it by car or by bicycle. 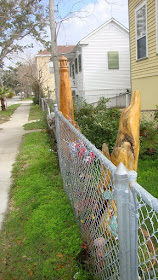 Here are two that were in front of one house. They must have been somewhat small trees--the artist had to come up with highly narrow, vertical sculptural solutions for them. 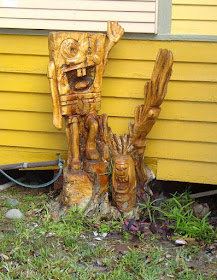 I'd like to know more about the sculptures. Did the property owners pick the subjects? Or was that decision made in collaboration with the artist(s)? Why Spongebob? 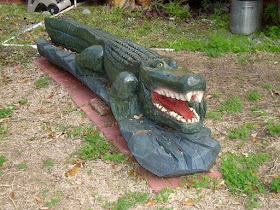 This Alligator was at the same house as the Spongebob, as was the next sculpture. Obviously this is an exception to the "stump" genre since it was carved from a felled trunk. 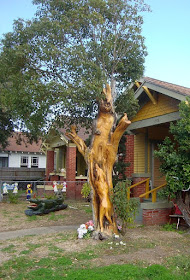 Dog treeing a cat and a squirrel

This is another exception because this tree isn't dead, nor was it an Ike victim. According to a neighbor who I spoke to, this tree had been struck by lightning in the 1940s, leaving part of it dead. The sculpture is quite ingenious--it uses the dead parts of the tree to depict something that might happen on a tree--a dog chasing a cat and squirrel up a tree. 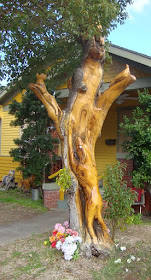 Dog treeing a cat and a squirrel (detail) 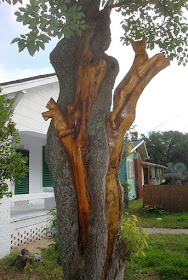 Dog treeing a cat and a squirrel (reverse side)

One thing that is missing here is credits for the art. According to the Chronicle, three artists are responsible:  Earl Jones (from Galveston--I know he did the magnificent Jack Johnson carving), Jim Phillips from Houston, and Dayle Lewis from Indiana. But I'd really like to know who did what. Unfortunately, I can't seem to find any contact information or websites for Jones or Phillips.

The thing is, we need to contact these guys. The drought has killed an estimated 1 in ten trees in the Houston area, out of an estimated 660 million trees (!). It was great that Galveston turned tragedy into art, and I think the same could be done here--if we could connect the carvers to the folks with dead trees.