Mary McLeary was chosen by The Art League as Texas Artist of the Year. That meant she got a nice retrospective exibition at the Art League, but also that she was obliged to be the jury on the 2nd annual Gambol show. There were 400 artworks submitted by Art League members, and McCleary chose 39 of them. These were displayed in the back gallery. The other works were displayed salon-style in the hallways and studios of the Art League.

So what we end up with is an interesting opportunity--we see not only the works selected, but also the works rejected. As I looked at Gambol, I was first struck by how many of the works had something in common with McCleary's own work. And that makes sense, that an artist would pick work that came from a similar place as their own. For example, McCleary does a lot of landscapes (or people in landscapes). And this show is full of landscapes. 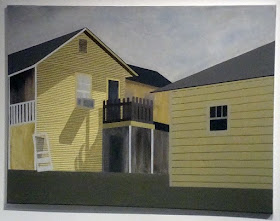 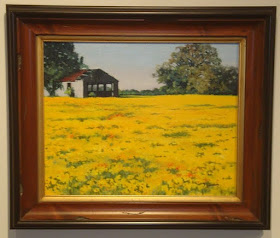 These more-or-less traditional landscapes by Fran Fondren, Cary Reeder and Daniel Brents are intriguing in part because you rarely see this kind of work at the Art League (or Lawndale or Diverse Works or CAMH). It's too old-fashioned. And that's regrettable. I find these landscapes quite beautiful and moving in a way. There is something about lone buildings, devoid of human presence (although human presence is always implied by any picture of a building). That lack of people is kind of a blankness onto which viewers can project their own stories, their own memories. That blank screen produces a nostalgia of sorts--at least it does for me. When we think of Edward Hopper, we think of his many pictures of people-less buildings and that feeling. 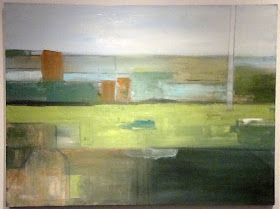 While Reeder, Fondren and Brents come out of a tradition of matter-or-fact landscapes that includes Hopper and Charles Sheeler, Nicola Mosley is a bit more abstract. It reminds me a little of Richard Deibenkorn, although Mosley doesn't push the abstraction as far as Deibenkorn. But one can view this image as a place or as an arrangement of colors and textures; neither is dominant.

But another aspect of McLeary's art is that it is collaged. The collaged elements are little bits of tubular material (I'm not sure what the stuff is) that she attaches to the canvas. In fatc, I'm not sure whether it would be more appropriate to call it a mosaic or a collage. Either way, it creates a visual density. Even though there is a large image, each McCleary piece is also a collection of tiny elements. And in Gambol, there are several works that fit that description. 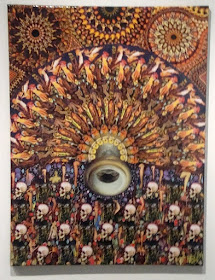 Patrick Turk is famous for his super-dense collages of repeating fragments of images. These are intense, psychedelic images. The tension between the whole image and the elements is something I can imagine appealing to McCleary. 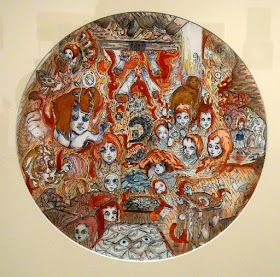 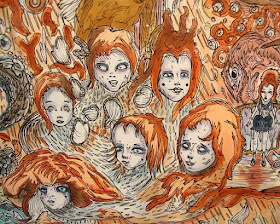 I liked these dense, detail-packed drawings by Fernando Ramirez. They remind me of punk artists like Gary Panter. The lack of polish is an expressive tool in such art. 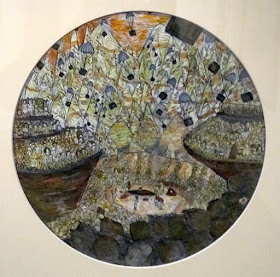 I checked out Ramirez's website and came across this statement:


Fernando Ramirez is a post-objectivity- painter, declaring his current body of work exceeds the romantic ideals, and self-involvement of traditional art making. He’s chosen to create “matter-of-fact-ness-drawings”, focused on developing an alter-world- that represents a- simulacra to our living world.

I don't understand quite what he is getting at here. These drawings are, however, anything but matter-or-fact. In his desire to create an "alter-world," he is creating a bizarre and exotic alternative to our world. Matter-of-fact is the landscaps of Carrie Reader and Daniel Brents above. His work of world-creating reminds me more of Brian Chippendale and Mat Brinkman in both style and content. It's quite impressive.

All of the above works, as heterogeneous as they are, feel connected in my mind to McCleary's own in one way or another. I didn't feel that with Magid Salmi's pieces. 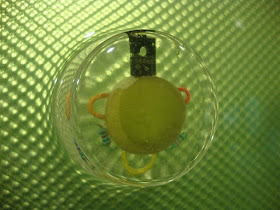 Salmi's work is also included in a Peel Gallery show that is currently up. Obviously there is a political component--the titles refer to genetically modified organisms, in this case foods. For those who oppose such foods, one word used to describe them is "frankenfood." Food created in a lab. (This is as opposed to genetic modification through selective breeding and cross-pollination, which has been going on for at least 10,000 years, if not longer.) Our visual image of Frankenstein is Boris Karloff, with bolts coming out of his neck. Salmi has used that visual idea here, putting electronic parts on pieces of fruit. This uses the idea of a cyborg organism as a stand-in for the idea of a genetically-modified organism.

But beyond the political meaning, the work looks great. She gives it an ironic high-tech gleam. The colors are perfect, too. 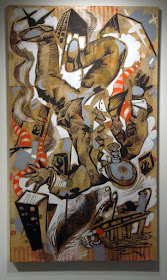 Kelly Alison is a fixture on the Houston art scene, having been part of Fresh Paint, the 1985 survey of Houston's painters at the MFAH.The image refers to 9-11 (the skyscrapers, the jet, the suit on the man) and perhaps particularly to a photo by Richard Drew of one of the many who jumped from the World Trade Towers to escape the fire of the burning buildings. I is loathe to call this work political (although Alison hasn't shied away from politics in her work in the past). Instead, I see it as a history painting--one of those academic genres that was the most highly esteemed in the 17th and 18th century. (Landscape, along with still-life, was one of the least esteemed genres by the Académie royale de peinture et de sculpture.) One thing that can be said about the genre of history painting is that there are certain events in history that deserve to be painted. This is, in a way, saying that these events should not be forgotten. (And, of course, doing such a painting allows a painter to put his own spin on the event. A Flemish painter would have had a highly different gloss on The Surrender of Breda than Velázquez did in his famous painting, for example.)

Almost equal in size to Alison's painting is this self-portrait by Raul Gonzalez. It was hung directly facing Alison's painting, creating a kind of twisted mirror image. Gonzalez appears to be standing in his studio, with the elements of his painted work behind him, including a "No Trespassing" sign. His work frequently incorporates signage as part of the composition, including using the colors of street signs as the under-painting. 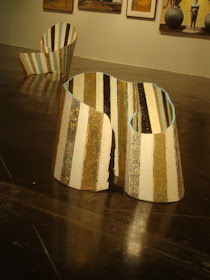 Emily Sloan's two pieces are the only sculptures in the show. I don't think this shows a predilection on McCreary's part for two-dimensional works necessarily. There simply weren't all that many sculptures submitted. (This tends to be the case as well with the Big Show at Lawndale.) These pieces relate to work Sloan has done in the past, like Black and White Picket Fence and Riffle. You know what? I want to see a whole show of these twisty little fences. I like them--I like the subject and the size (about knee-level) and the curviness of them.

And what about the work McCleary didn't select? As I wandered the halls and studios of the Art League, it was obvious that a lot of the works weren't chosen because they weren't very good or very original. And that's OK--a lot of members are members to take classes and hopefully become better artists. They can't all be accomplished artists yet. But there were pieces that were quite interesting to me but that McCleary ultimately eliminated. 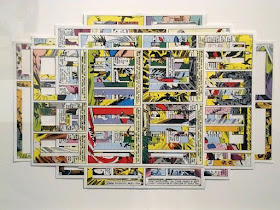 What Curtis Gannon has done with this collage is to take a group of comic book pages, cut holes in them, and layer them on top of one another. But what's interesting to me is that he deliberately chose pages with very conservative panel layouts. Panels are the boxes in which each picture in a comic is contained. Drawing them as squares or rectangles (paralleling the edge of the page) is considered a fairly undynamic way of arranging them. (Panels can, for example, be angled, overlapping, curvy, free-form, or even non-existent.)

For the purpose of this collage, the panels had to be square or rectangular. In each panel, he has cut a hole in the page that mimics the shape of the panel but is a little smaller. The viewer then sees overlapping rectangles, with the content of each panel mostly erased. That said, you can still see a lot of the text--this is because dialogue and narration is usually placed on the edges of a panel. This is especially true in assembly-line created super-hero comics (which are Gannon's sources), where the letterer places the words on after the artist has drawn the picture in each panel. 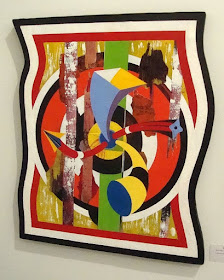 David Haberman, In Search of the Big Bang

McCleary may have found David Haberman's antic geometric abstraction, In Search of the Big Bang, a little too whimsical to choose. But I liked this fun piece of art.