Most Popular Pan Posts of 2011

I write posts, Dean Liscum writes posts, but we never have any idea in advance whether they will catch on with readers. You people are ciphers! Anyway, here are the most popular 2011 posts based on page views:

1) A Matter of Wit at Fotofest. Readers came for the nudity but I hope they left delighted with these wacky, surreal photos.

2) A Letter from Sol Lewitt to Eva Hesse. I can take no credit whatsoever for this animated version of a well-known encouraging letter from the famous conceptual artist to the famous post-minimal artist. It was animated by Levni Yilmaz, and it really caught on with readers, probably because of its good humor and optimism. 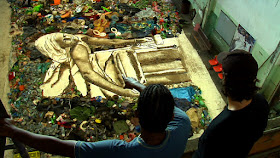 3) Vik Muñiz's Waste Land. This was a review of the Oscar-nominated documentary. Read the review then watch it on Netflix!

4) Mysterious North Houston Art Colony Discovered. This was my first (of three) post about Itchy Acres up in Independence Heights. It got a link from Swamplot, the ever-popular real-estate blog, whose readers (including me) delight in finding new and unusual things in out-of-the-way Houston neighborhoods.

6) Is The Houston Chronicle's Art Critic Trying to Get Himself Fired? This was the first of several posts on the saga of Devon Britt-Darby, where he comes out as a once-and-future gay prostitute and former meth addict. This is an ongoing story, and you can follow it on Britt-Darby's blog, Reliable Narratives.

7) Urban Animals by Merrie Wright. There's a great Shonen Knife album called "Rock Animals" which has a song on it ironically about animals made of concrete in a local playground. Maybe people had the same cognitive dissonance here--Wright's art had nothing to do with the beloved 1980s roller-skating gang in Houston, but was actually about animals in urban environments, evolving new strategies of camouflage.

8) Howard the Duck is an Orphan Now...Gene Colan, 1926-2011. This was an obituary of the artist most associated with the comic character Howard the Duck. 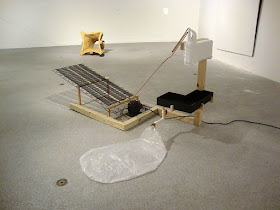 Francis Giampietro, "Thy creature, to whom thou art bound by ties only dissolvable by the annihilation of one of us!", reconstituted refrigerator, pressure treated wood, furniture leather, ice and pvc, 2011

9) Every Year More MFAs Are Loosed On Houston. This was my review of the 2011 University of Houston MFA class, but it also was a think piece on what happened to previous year's MFAs.

10) Diana Al-Hadid, Cordy Ryman and Jennifer Riley at Peel. Three out-of-town artists showed at Peel (which primarily shows out-of-towners). Al-Hadid and Ryman in particular are up-and-comers. This review is not too different from my other reviews, so I have no idea why it was so popular.

All I can judge by this is that readers like the following--nudity, sex workers, videos, and artists who aren't from Houston. So for 2012, expect a lot more posts featuring videos of international art stars cavorting with naked prostitutes. That should push my page views high enough to start running ads!

Now one final "most popular" post. It's from 2010, but it was the most popular post in 2011 and is my all-time most popular post: Age of Consent. It's a discussion of the movie Age of Consent, about an Australian artist who moves out to a remote beach to try to get new inspiration. It's based on a novel of the same name by an extremely interesting Australian artist/writer named Norman Lindsay. So why is this old post so popular? Imagine the following words in a Google search: "Helen Mirren" and "naked".