You Had to Be There

One of the problems with this blog is that my photos of the art rarely do the art justice. (That goes double for my writing, but that's not what this post is about.) Aside from my glaring deficiencies as a photographer, there is a lot of artwork that loses a lot when photographed and shrunk down. And there is work that effectively can't be photographed. It's through this prism that I want to look at a bunch of artwork I saw this weekend here and there--work which should be experienced in person. 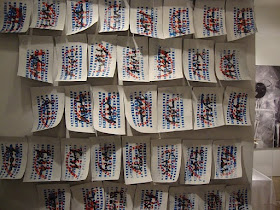 At first glance, Underwater Lab Rats Practicing Religion by Felipe Lopez looks like a bunch of drawings/prints made with blue, black and red pigment. But the gallery, Wade Wilson Art, had provided visitors with red/blue 3-D glasses with which to view it. Not that these were 3-D paintings. But with the blue and red lenses, each eye saw only part of the drawing--and the viewer's brain had to reassemble the image. Looking at this wall of more-or-less identical drawings through 3-D glasses was a vibratory experience. But you had to be there.

(In the interest of science, I took photos of it through each of the colored lenses of the glasses, then combined them as a gif. It falls far short of reproducing the experience of seeing the piece through the glasses, though.)

This exhibit was called On the Edge of the New: New Paintings by New Artists. It was full of newy newtastic newness. The newosity was palpably new. Another artist I liked in the show was Winston Lee Mascarenhas. 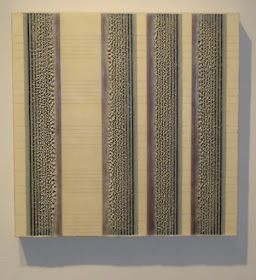 Untitled 3.0 apparently used ribbons collaged onto the canvas to create the stripes. Then the encaustic is carefully applied to match the vertical pattern. The wax patterns on the surface give is a physical texture (which is only hinted at in this photograph) while simultaneously softening the lines underneath it. The encaustic blurs it in a way that you can imagine motion is being depicted. 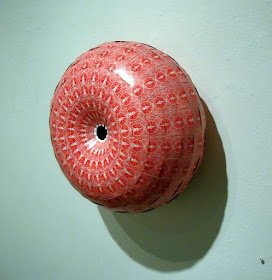 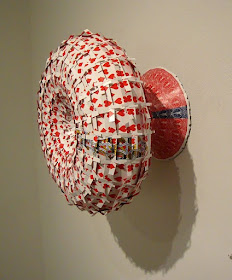 These two pieces by Rusty Scruby at McMurtery Gallery don't quite fit my thesis because they both photograph so well. But as sculpture, any photograph is going to be necessarily inadequate because it doesn't allow for the sensation of space--it's an image from precisely one point of view.

These fall into the general realm of stunt art: "I can't believe this dude made these out of playing cards!" But getting past the stunt aspect, the shapes Scruby creates are really nice--like cartoon mushrooms growing sideways out of the wall. (By the way, Scruby's website has a great-if-depressing illustrated story of art theft. Read it here.) 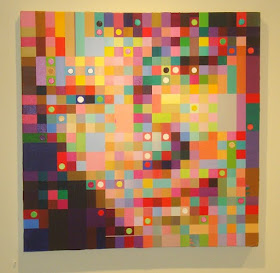 I don't know how Judy by Rodrigo Aguilera will look on your computer screen. When I saw it at d.m. allison, I saw it as a pleasing grid of colored squares, with occasional inscribed circles. When I held up my camera to take a photo, I got a big surprise--this was actually a highly pixelated face. 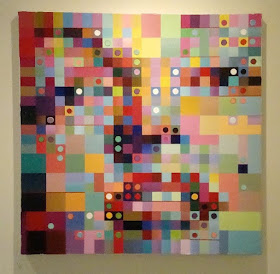 The fact that Aguilera made these two optical illusions is trivial--optical illusions are the puns of visual art. Clever, at best. But what is so perfect about these (and what is hard to photograph) is that the transition point where the seemingly random colors coalesce into a portrait is almost exactly the distance at which a typical gallery goer will see the pictures. If the viewer enters from the side (as I did), she will see squares. If she enters from the front, she will probably see two portraits. And what's particularly appealing is that they work as pictures either way. They are pleasing abstractions up close, and they are brightly colored pop icons from a distance. But the way to see them is in person--a photo won't do. 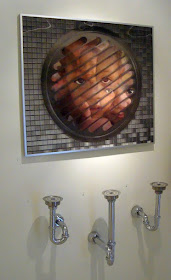 Obviously videos are especially victims of still photography, and video sculptures like this all the more so.Aisen Chacin's Secluded Series Favela Sinfonia, also on view at d.m. allison, includes tiny video monitors in the drains. To complicate matters, the large photo here is lenticular, so it changes as you walk around it.

Chacin's series seems to be about the children of favelas, the vast slums of Rio de Janeiro. By putting them in drains, perhaps she is saying that this is how society sees them, as refuge to be washed away into the sewer. 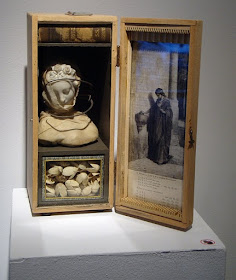 Mathematics Lesson (currently on view at Hooks-Epstein) is a three-dimensional piece, but aside from that, it is pretty easy to see in this photo. So what's missing? Why is this piece included? Because it has a literary component that is missing from the photo. It is a quote from the introduction to The Book of Sand by J.L. Borges, comparing the pages of a book to an infinite series. (This was typical Borges--in the introduction to Dr. Brodie's Report, he said that each story--any story--implied the universe.)

I feel a close connection to this piece. When Ward Sanders had his last show here in Houston, we got into a discussion about literature. He told me a bunch of his favorite authors, and it seemed to me that in this literary mosaic that there was a Borges-shaped hole. I suggested he read Borges. He was a little nervous about that because whenever he takes up a new author, he feels compelled to read everything that author has written. No worries, I said. Every Borges short fiction fits into a single volume. It is actually quite easy to read everything that Borges ever wrote that's been translated into English. So apparently, Sanders took my advice. And one result is this lovely piece. Of course, I think most people who know his work would agree that he has always been a Borgesian artist, even if he didn't know it. 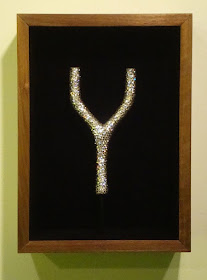 Jordan Johnson's Sling, which is part of the Sketchy Neighbors show at ARC Gallery, has two hard-to photograph elements. Shiny stuff--1560 (!) rhinestones--and black velvet. (His other piece in the show is a very subtle black velvet painting which utterly defeated my camera.) I loved this piece because it glams up something ordinary and quotidian--which is one of the functions of art, in a way. After all, even a social realist painting like Courbet's Stone Breakers turned his subjects into the stars of a giant, powerful painting.