When I first walked into Devin Borden Gallery and saw Geoff Hippenstiel's large new canvases, the first thing I noticed was the gold and silver paint. This sparkly metallic paint calls attention to itself, in part because it's not something you see often on paintings like these--large, painterly abstractions. And to be sure, I read them as abstractions at first. And as usual, I took a lot of photos. 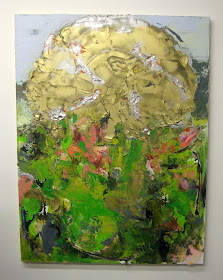 It was when I looked at my photos that I realized that these were landscapes--highly abstracted landscapes. There was something about the gold and silver that distracted me from reaching this obvious conclusion. And it isn't a surprise--Hippenstiel has often skated between abstraction and representation. And his use of thick impasto, to my eye, disguises the representation that exists in the work. The impasto on these works is very thick indeed. 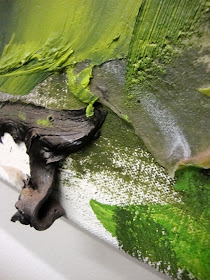 In fact, on opening night, you could still smell the not-quite-dried oil paint. 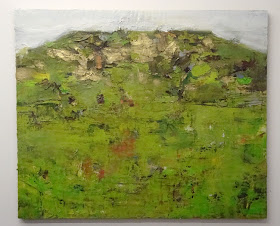 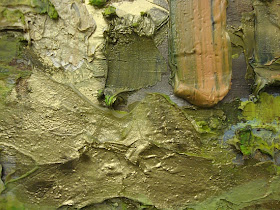 So in the presence of the paintings, you see the gold, the silver, the impasto. That's what catches your eye first. And if you lived with them for a while, you'd see the hill. A small hill, with a more-or-less flat top. Not quite a mesa but similar. You don't see hills in Houston. But they seem familiar. 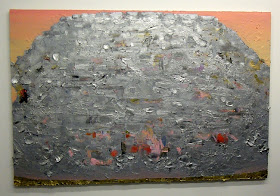 I briefly lived in the Simi Valley, which is a suburban area just north of Los Angeles. It is surrounded by hills like these (except that none of the ones I saw were silver, but we'll allow Hippenstiel some creative license). I used to hike in them. They are all along the coast in Southern California. Hippensteil was born in Santa Monica, so maybe these paintings are memories of those Southern California hills. 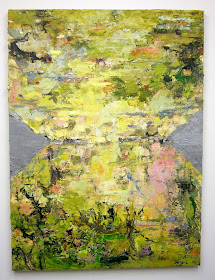 It seems that once the form was fixed in his mind, he gave himself permission to play with it. Hence a silver hill. Hence a mirror-image hill above.

Another interesting feature of this work is the use of oil-based spray paint. He uses silver and gold spray paints which more or less match the silver and gold paints from a tube. He will take an area painted green with a thick, textured impasto and spray over it in silver. The spray paint coats the green with an thin but opaque layer of metallic color. It is a way for him to retain the almost sculptural form of the pain while changing its color. So you can view it as just a tool he uses. But given the prominence of graffiti art in the art world now, I wonder if that influenced his decision to use spray paint.