Glasstire has moved their troops into key positions in Southern California, as seen in this map

The Empire expands, part 1: Glasstire has started up a Southern California edition. So far it looks just like the Texas edition, except for the map. On the Glasstire Texas map, each little marker represents a whole city, if not a vast region within Texas. On the Southern California map, many of the markers represent a different region of Los Angeles--Santa Monica/Venice, Culver City, West Hollywood/Midtown, Downtown, and LA Other. (I know Santa Monica, Culver City and West Hollywood are separate municipalities, but they're separate in the sense that Bellaire or Piney Point are separate from Houston.) The last three regions listed are Santa Barbara, Orange County and San Diego. (I guess Bakersfield is too far north or too blue collar to qualify.) Now this expansion is risky--many in SoCal might resent the intrusion of a bunch of Texans and fight back! Likewise, if the Glasstire folks take their eyes off their capital city, they might lose it to some amateur upstart like The Great God Pan is Dead.

The Empire expands, part 2: Glasstire reports that Rice is going to get a new art center. Art has risen and fallen at Rice since the 60s, when it became its own department. Its history is too involved to relate here. Sewell Hall was built to house the department, and it had two additional "temporary" buildings way over on the Southeast side of campus (which was quite isolated back then). The temporary buildings were the Rice Media Center, which housed the movie theater (one of the best theaters in Houston, in my opinion) and various facilities for photographers and film-makers. Next to it was the Rice Museum, which was a little like the CAMH--a non-collecting museum showing contemporary art. The department was small and was combined with art history. The art department was eventually spun off from Art History to become Visual and Dramatic Arts. Art History grew--now it offers a Phd. But VADA has stagnated. (And the Rice Museum no longer exists.) But this might change with a new facility--with more studio space and more exhibitions space, Rice might be able to offer an MFA program (I have mixed feelings about that) and perhaps more curation-oriented classes. [Glasstire] 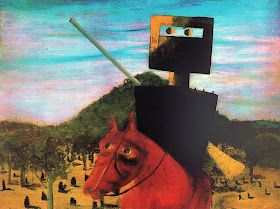 Sidney Nolan (a member of the Boyd family by marriage), Ned Kelly, 1946

I might not have an empire, but at least I have a dynasty. There is a family that since 1851 has produced and/or intermarried with many of Australia's leading artists. Personally, I've never heard of any of these various Boyds, but let's face it,  Australia has not historically been an center of the art-world. Still, the country has produced a few great artists, including Sidney Nolan, who married Mary Boyd, herself a painter and part of the Boyd family. OK, there is so much that is weird about this. First of all, that there could even be a multi-generational group of artists in the first place, one that starts in 1851 and still exists with practicing artists/descendants today. Artistic talent occasionally goes from one generation to the next, but we're talking six generations. Second, even though I was born in Australia (really), I have no connection at all with the Australian Boyd dynasty. There is a book about the family called The Boyds: A Family Biography. Would it be too weird if I got a copy of this book?

The new paradigm for self-published comics. This excellent Kickstarter campaign reminds me of how the world of comics has changed. With distribution more difficult than ever (especially for art comics), more self-publishers are turning to Kickstarter to pre-fund their comics. I believe the idea behind Kickstarter was initially philanthropic. But for cartoonists, it has become in some ways an elaborate preordering system. With Suspect Device 2, if you "donate" $13 dollars, you get a copy of the finished comic, post-paid. Self-publishers have always dealt with middlemen--distributors, wholesalers,retailers--who take big chunks of the sales revenue. Kickstarter is another middleman, but the toll they charge is quite modest (approximately 8%). 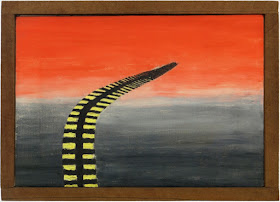 Forrest Bess, cancer fighter. Forrest Bess is in the news a lot lately. The latest news is that a bunch of his paintings are being offered for sale by Christie's to benefit MD Anderson. The Art Market Monitor article has an error, though. Bess had a show at the Houston Museum of Fines Arts in 1951 (they say his first museum shows were in 1981). I've heard there will be a Bess solo exhibit at the Menil next year, but I don't know any of the details. [Art Market Monitor]