If Charlie Parker Was a Gunslinger, There'd Be a Whole Lot of Dead Copycats (NSFW)

When I read the description of Emily Peacock's new photo exhibit, You, Me & Diane, my first thought was, "Oh swell. More art about art." In her statement, she wrote


You, Me & Diane is a series of photographs based on the work from the seminal book Diane Arbus: An Aperture Monograph. I am currently "recreating" Arbus' influential images as self portraits.

My problem with this is that it is all too common, that so much art produced in the past few decades has been about art from previous times in a very literal way. At first, this kind of work could be seen as a post-modern take on the idea of the "original." In the 80s it seemed like every artist had read Jorge Luis Borges' "Pierre Menard, Author of the Quixote." In this clever story, a French Symbolist writer gets it in his head to rewrite Don Quixote from scratch. He fails to rewrite the whole thing, but what he does write is an exact duplicate of the original, but, according to Borges, superior.


It is a revelation to compare Menard’s Don Quixote with Cervantes’. The latter, for example, wrote (part one, chapter nine):

. . . truth, whose mother is history, rival of time, depository of deeds, witness of the past, exemplar and adviser to the present, and the future’s counselor.

Written in the seventeenth century, written by the “lay genius” Cervantes, this enumeration is a mere rhetorical praise of history. Menard, on the other hand, writes:

. . . truth, whose mother is history, rival of time, depository of deeds, witness of the past, exemplar and adviser to the present, and the future’s counselor.

History, the mother of truth: the idea is astounding. Menard, a contemporary of William James, does not define history as an inquiry into reality but as its origin. Historical truth, for him, is not what has happened; it is what we judge to have happened. The final phrases—exemplar and adviser to the present, and the future’s counselor —are brazenly pragmatic.

The contrast in style is also vivid. The archaic style of Menard—quite foreign, after all—suffers from a certain affectation. Not so that of his forerunner, who handles with ease the current Spanish of his time.

Borges was making a point that the meanings of texts change over time--and in the case of certain texts, like Don Quixote, they become richer over time. But I think many artists took the idea literally and started recreating earlier works. There were theoretical justifications for this, but for me they were empty conceptual gestures. And for artists who did a lot of these exact copies, it was like telling the same joke over and over. We got it the first time. I'm talking about artists like Mike Bidlo and Sherrie Levine. 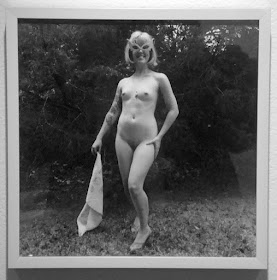 So I had prejudged the show before I even took a close look. And what do you know? I liked it. It seemed witty and charming and surprisingly warm. Peacock uses her own family members in many of the photos (in addition to herself). So instead of being the cold, alienated images of outcasts and "freaks" that Diane Arbus created, we have a series of photos of people playing dress-up. They look like they are having fun. The feeling you get from looking at these is the opposite of what you feel looking at Arbus's photos. Their use of costumes reminds me of Yasumasa Morimura. But Peacock's photos are more playful than Morimura's.

Like A Jewish giant at home with her parents. Peacock, who in real life is quite diminutive, plays a pituitary giant.  Arbus's original was freakish and sad, a photo of a tragic individual stooped over next to his normal-sized parents. But Peacock's is humorous.

What Peacock's work here reminds me of is the Michel Gondry movie, Be Kind Rewind. In it, Mos Def, Jack Black and Melonie Diaz engage in a project to remake well-known moves in their own low-tech way, a procedure they call "Sweding." These movies could have been terrible, but end up being full of heart and popular with the local neighborhood--in part because they cast members of the local neighborhood to play the parts. Peacock's copies of Diane Arbus succeed because they have the same kind of do-it-yourself heart.