What I did at the Lone Star Explosion Biennale: Day 1

First, let me be totally honest. I don't know much about performance art. I attend local performance sporadically and read about/follow the discipline even less frequently. That being said, here's what I saw\heard\felt\did at the Lone Star Explosion Performance Art Biennale 2012.

I arrived after things were well under way. According to a few people that I talked to (and who will remain nameless to protect their reputations from the fact that they talked to me) I missed a great show by Jill Pangallo. I have no idea what it was about but any time you can get someone (Dennis Nance in this case) to dress up in kitty-cat suit, it gets my applause. 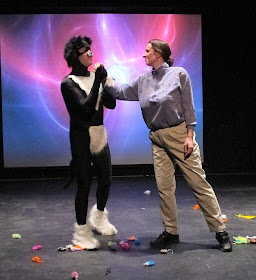 
When I showed up, everyone was filing out of the theater and into DiverseWorks parking lot. A man wearing homemade, European (skin tight with smaller, slimmer ears) version of a Mickey Mouse mask. This was the performance Force Majeure by Non Grata. 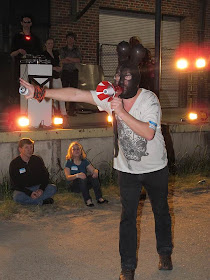 I wasn't sure what he was saying, but I don't think he has to worry about a copy right infringement lawsuit from Joel Osteen. Another member of Non Grata, did a hot little dance on the roof of car (donated by KPFT). 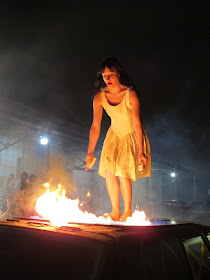 After the dance, one of the members of Non Grata took a sledge hammer to the car. All this while a DJ played some heavy trance music. 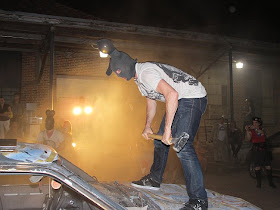 A disgruntled member of Euro-Disney expresses his angst

Then the Non Grata members handed the sledgehammer to members of the crowd and let them get busy with it. 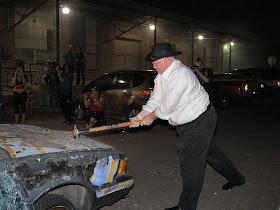 The crowd went this way with it, (out of frustration? anger? pent-up malaise? too much sparkling white wine?) and then they set it on fire at which point someone extinguished the fire. 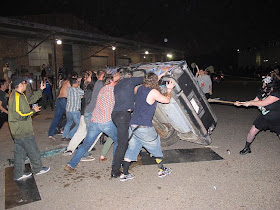 I think the point of the piece is actually to see if a cab will come to DiverseWorks within 24 hours.

Distorted metal and pyrotechnics aside, what struck me about this piece was that what passes for mere entertainment/art here is the stuff of political struggle in the rest of the world.

Next, (I think...and yes you can take points off for incorrect ordering) John Gregory Boehme performed a piece about understanding and the human condition. (double-off for not catching the title, but he wasn't listed on the bill for Thursday). It was actually very moving. May be it was the slow, deliberate movement of his hand as he picked up each sheet of paper. May be it was the way he wrote people's names as he sucked the paper to his face. May be it was the rhythm of his voice as he repeated his name and then interspersed members of the audience names. 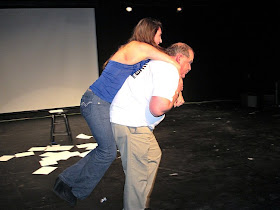 It's easier to just give your friends money

May be it was the way in which he unabashedly approached people and asked to carry them and then did or may be it was the way he deposited them back in their seats and very plainly stated the fact, "friend".  I'm not sure why. To paraphrase the artist Eric A. (a.k.a Dominguez), Boehme made "the paper seem heavy but the people seem light."Regardless (or fuck it), it worked.

Gim Gwang Cheol actually preceded Boehme.  His piece started with him silently reading from a large book, which could have been a bible, which could have been an almanac, and tearing out a page, crumpling it up, and tossing it on to the stage. This took awhile. Next, he produced an elastic red string, and in mime-like fashion, he anchored it to the floor and then strained to pull it across portions of the stage and anchor it to the floor. Then he covered an eye with double stick tape, and proceeded in a slow motion pantomimed run, to move about the stage gathering up some of the crumpled sheets of paper and adhering them to his face. 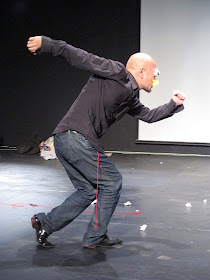 He extended a retractable, metal tape measure, looping it into arm long segments like a lasso and then tossed it out over the audience. Before the tape landed on anyone, the tension in the metal tape and the retraction mechanism caught and the metallic lasso snapped into the tape holder. (It was magical. I hope there's a video of it.) Finally, in a metaphorical post-coital moment (after all he had reunited all the pages on his face), he smoked. 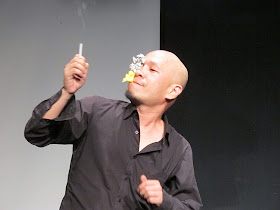 Gim Gwang Cheol getting his nicotine on

Again, quiet and deliberate, and it captivated my imagination.

The final act of the night was Rodney Dickson's Fucked Up Queen Bee Houston, and it lived up to its title. It started with the audience being invited\coerced to join the artist on stage. Then, it began in earnest. A keyboard was smashed. Rose petals were cooked with onions. A couple people were reading poetry. A group of nude models was either modeling or having sex or modeling having sex. An artist was attempting to draw the nudes doing whatever they were doing. A hefty Jesus with a crown of thorns was wandering the stage with a rather diminutive cross. An extra from Mad Max was dragging chains and metal behind him and shouting into a mega phone. An artist was cutting up a board with a power saw. 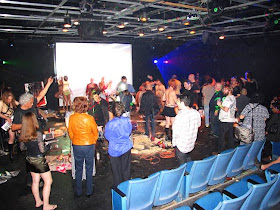 Yes, Virginia it was as loud and as chaotic as it looks... and no art bloggers were injured in the performance of this piece.

All photos are copyright (c) Steve Patlan, who had a much steadier hand than I did through the whole evening.