I recent read Perfect Rigor: A Genius and the Mathematical Breakthrough of the Century

, a biography of Grigori Perelman by Masha Gessen. Perelman is a great mathematician who solved the Poincaré conjecture, which was one of the great unproved math problems. But Perelman is also extremely eccentric, to say the least--an extreme misanthrope who has now cut himself off completely from all human contact except, apparently, for his mother. He even turned down a $1 million prize for solving the Poincaré conjecture for reasons that from the outside seem utterly inexplicable. In the book, Gessen discusses the details of Perelman's behavior with a variety of psychologists and neurologists who conclude that he may have Asberger's syndrome, a type of autism that allows one to function in human society but that makes it hard for one to understand other people.

I thought of Perelman as I looked at the work of John Adelman at Darke Gallery. Adelman's art consists of paintings/drawings created by methodical, repetitious, and indeed tedious actions. For example, with 3212 (nails), Adelman dumped 3212 nails onto a black wood panel then carefully drew an outline of each nail where it dropped with a white gel pen. 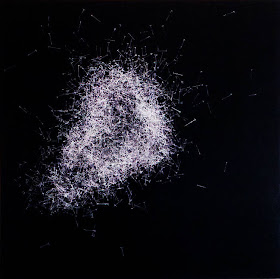 What can you say about this? First, you might recall that Jean Arp did something similar--he would tear colored paper into squares and drop them onto a larger piece of colored paper. He would glue the pieces he dropped where they landed. In short, chance, rather than human agency, determined the final composition of the work.

Second, one might think of the wall drawings of Sol Lewitt, where the work was really the set of instructions or rules that Lewitt created rather than the final result. For each drawing, Adelman creates a set of rules for himself and then more-or-less mechanically executes the rules. 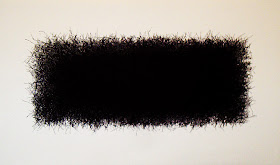 You could make 73160 (straw bale) yourself, if you had plenty of time and patience. It would be different from Adelman's--the number of pieces of straw in the bale would certainly vary, and the random location of each piece of straw would be different as well. But the idea would be the same.

I asked Adelman why, then, did he just not hire someone to execute the pieces? He said something about the process of doing it being important to him. He likes counting the nails and pieces of straw. He likes numbers in general--he can tell you how many hours he spent on each piece. And as you might expect, these pieces are so laborious that he has little time for anything else. He said making these things leaves him with no spare time to do other things. Which starts to sound a little like Gregori Perelman, although unlike Perelman, Adelman seemed quite capable of and willing to carry on a conversation with another person--at least about his art.

So when you look at the pieces and ponder their making, things like Asberger's syndrome or obsessive-compulsive disorder come to mind. That's what I meant by the phrase "criticism or diagnosis." Do we approach this work (and the process of making it, which is clearly an important aspect of it) through criticism? Or do we do we attempt to make an amateur diagnosis of the artist? The latter option strikes me as inherently unethical. And yet, we do this unethical thing all the time when discussing certain artists and writers. It's hard not to think of people like Antonin Artaud, Malcolm Lowry, or Forrest Bess without thinking about their psychological problems. Their work seems so intertwined with their mental health. And those were three that popped into my head--I think without much effort, I could come up with a list of dozens. And no matter what one thinks of Adelman's pieces as works of art, the more one knows about the process of making them, the more curious one becomes about his state of mind. Or, at least I'm curious about it. 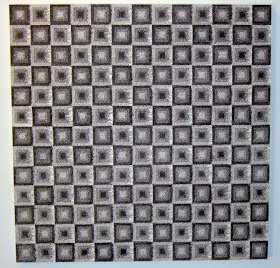 Adelman describes Empty as "a stable structured design of handwritten dictionary definitions." He uses the dictionary because he sees it as neutral (having no political, religious or personal meaning). Presumably he also uses it because you can go through it methodically. (Of course, there is ideology in dictionaries. At the very least, we have to say that dictionaries, like encyclopedias, are products of the the Enlightenment.) 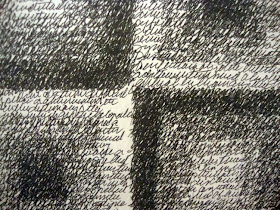 But in the end, we are left with a piece that looks like something. The process is never not going to be important, nor the mind of the person who created it. We can't pretend those things are irrelevant. But I look at Empty and see this fuzzy but highly regular patter. And I look at 142136 (nails) and see these falling curtains of light that strike me as beautiful.

That John Adelman dropped 142,136 nails onto this piece of paper and drew an outline of each one is perversely fascinating, but if the result wasn't interesting to look at, would we care? Instead, what remains is a work of art that is, for me at least, delightful to see.