You don't see a lot of sculpture in galleries. Work tend to be "wall art"--paintings, photos, drawings, collages, reliefs, etc. The reason is obvious--sculpture is hard to own and display. For a collector, sculpture displaces furniture. It renders some amount of floor space unusable. It's just not as convenient to collect as wall art. So that means sculpture is not something you see very often in art galleries. And that's too bad.

But Devin Borden got around the inconvenience factor with his show Table Top by showing mostly very small sculptures--the kind that can fit on a bookshelf or in a china cabinet. The funny thing is that when I think of pieces like that, I think of ceramic tchotchkes. Things your grandmother might have cluttering up her parlor. Or to be more modern about it, the toys and action figures that hipsters and comics nerds collect--you can buy stuff like that at Domy or Bedrock City.

And in a way, the work in this group show is a variation of that. Matt Messinger's pieces seem to be a direct riff on that theme of grandmother-friendly ceramic tchotchke. 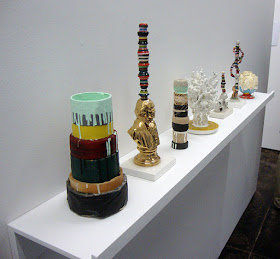 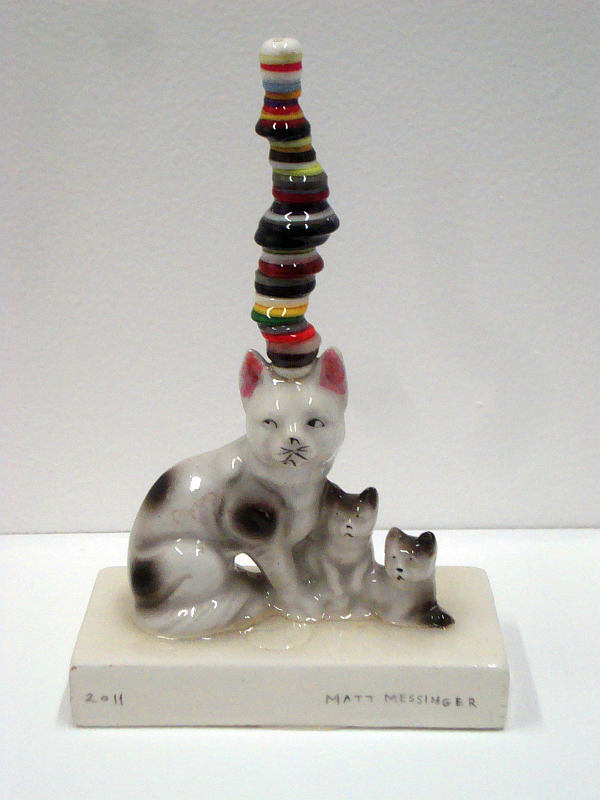 When I see stacks of buttons like that, I think of Tara Donovan, but her use of them is clearly different. She uses identical buttons to create a texture. Her buttons tend to have neutral, unassuming colors. Messinger is going for color with his stacks.

So unlike Donovan, I think Messinger is all about these little ceramic things and the buttons for what they signify--I kind of domesticity that reminds one of  of a particular place and time. You are a child and you visit your aunt or grandmother and you see these things, and you nose around, looking in drawers (because you're bored) and you find old buttons. The three twisting stacks of buttons in untitled (Owl and Teacup) reminded me of DNA. And this kind of stuff is in our DNA. It's a part of our collective culture. 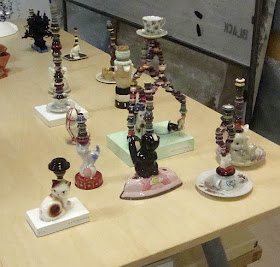 more Matt Messinger in the back room 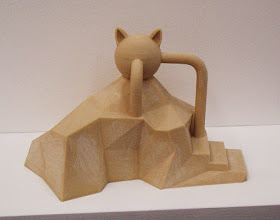 Also verging on cute is Cat Mount by Sharon Engelstein. But it's also kind of mysterious. Because the image is small, when I saw it I saw it as a scale model for something bigger. With the jagged rock-like form and the steps on the right, you could see it as the top of a rock outcropping, or the very summit of a mountain. And on top of this mountain is a strange piece of cartoon-cat-shaped equipment. It has two pipes, implying liquid or gas moving through it. It could almost be a piece of gas pipeline equipment. Except that it's cat-shaped. I imagine that someone has taken a long stairway up the side of a mountain--not a high mountain (no snow), but still it took some effort to get to the top. And then you behold this mysterious piece of equipment. To me, that would be like discovering that magic is real. It's a hike up a mountain worth taking. Needless to say, I love this little sculpture. 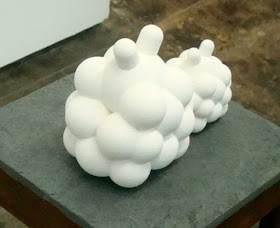 This earlier piece, Bumbry, feels like a model for one of her large forced-air pieces, but I have never seen this particular arrangement of bulbous partial spheres in any of those larger pieces. But like the inflatable pieces, it is playful and biomorphic.

These rocks by Nicholas Kersulis are not cute at all. Kersulis was a Core fellow a few years ago. I've seen similar pieces to this where he used white gesso. I don't know how he makes the gesso so thick, except that maybe he paints on layer after layer. Gesso is naturally white because it's made out of gypsum and chalk, but it can have pigment mixed in, which is presumably the case here. 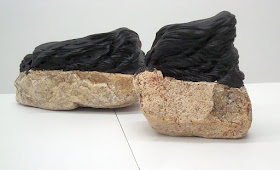 The way the gesso part of each rock is kind of swirly makes it look a bit like obsidian (although less glassy than obsidian). Its utter blackness reminds one of coal or asphalt. The fact that the rocks are bisected in a way--the bottom half natural rock, the top half black thick gesso, make me think of rock strata. And the display on the table looks like a collection. With a glass top to turn it into a vitrine, it could be a display in a natural history museum. But one can't get around the fact that the gesso portion of each "rock" looks weird and unnatural. And ironically, that's what is so appealing about them. 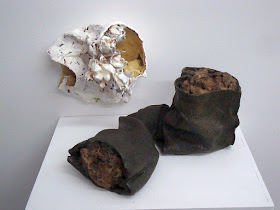 Kaneem Smith's work goes a bit off message--Untitled (White) is a wall hanging instead of a table-top sculpture. But the scale is the thing, really. Even though Smith is working on table-top scale, she has produced work that is the opposite of cute (like Kersulis). These pieces are not going into auntie's china cabinet. The work is grungy. The use of burlap and cotton perhaps are meant to recall the importance of cotton in Houston (and the South generally), and the grungy quality of the work, as well as the "wrung out" aspect of Wring Out may be a reference to the back-breaking labor, performed first by black slaves and later by black sharecroppers in appalling conditions. 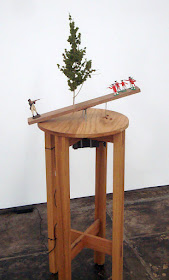 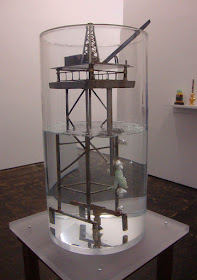 The New World seems especially appropriate for Houston. In fact, I'm always puzzled by the relative lack of art that relates to oil and gas production. It was in 1863 that Charles Baudelaire in "The Painter of Modern Life" instructed artists to look around and depict the modern world in which they lived in their art. And yet, oil production remains under-explored as an artistic subject. This witty piece, like The New World, has a kinetic element--bubbles pumped from the bottom that make the octopus clinging to the side of the platform move. Folks in the oil industry will recognize that this is a fairly archaic form of drilling platform.

Thematically, there is little to link these artists. Lauster and Smith both touch on industries that are associated with Houston historically. (Kersulis rocks, if you see the black gesso as symbolic of oil-bearing rock, could also be read as relating to oil production.) Messinger explores cuteness and nostalgia, and cuteness is touched on by both Engelstein and Lauster. But mainly what we have here is a heterogeneous collection of small sculptures, each with its own virtues.