McClain Gallery took the title of its current exhibition, It’s A Golden Time of Day, from a painting by Houston based artist Tierney Malone. Constructed in the style of an old sign and intensely approachable, Malone’s painting the gallery said evoked “a lighthearted mood.”

Here’s an observation about Malone’s thematic use of jazz in his mixed media pieces: montages of disarranged text and images visually correlate to Coltrane’s and Monk’s musical dissonance. In her 2009 Art Lies essay about Third Ward is My Harlem, Malone’s solo exhibition at Diverse Works, Valerie Cassel Oliver beautifully assessed the jazz theme:


His large, signature paintings that fracture and reconstitute the vibrant jazz production of the 1950s shift the focus of jazz’ influence, as evidenced in the works of stalwarts like Stuart Davis and Jackson Pollock, into the realm of knowingness and embodiment. Malone’s work is not so much influenced by jazz as it is molded from its very sensibilities. Malone deconstructs the familiar to create images that allow the audience entry into the heart of Modernism and the role that jazz served to unlock this culturally prolific period. Malone’s work resonates precisely because he skillfully mines the essential elements of Modernism: music, painting and typography as design. However romantic or archaic these elements may seem in this millennium, we can’t shake their influence and continued role in shaping our future. Malone knows this, and his paintings-cum-installations lead us into a revisitation of cultural histories that technology has anesthetized us into forgetting. 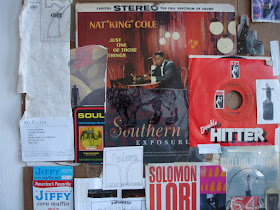 Given his extensive knowledge of jazz, Malone is indisputably cognizant of its role in modernism as Valerie pointed out. There might be an additional factor driving his art - the basic desire to tell the viewer who he is and where he comes from. Such desire explains his juxtaposing the soul food-connoting typographic element Jiffy corn muffin mix with album cover imagery and jazz related text. It also accounts for placement of a self portrait-like figure in profile against a road map showing the Alabama state border - Malone came to Houston from Alabama.

An important component of who he is and where he comes from is his relationships. In 2009 Franklin Sirmans included Malone in the Négritude exhibition at Exit Art in New York. One of the works he displayed was the text based Bert Long, a humble straight-forward tribute to an older artist for whom he feels love and respect, whom he considers a mentor and father. There’s purity in unhesitatingly presenting a collage painting of his friend’s name, especially in the face of Négritude’s lofty literary underpinning and complex references to African culture. To show an absurdly accessible and nostalgic work of art in dollar-chasing New York indicates exquisite indifference to commercial pomposities.

Using paintings, installation, and video Malone biographically illustrated who he is and where he comes from in the aforementioned Diverse Works exhibition Third Ward is My Harlem. Video text for instance stated, “A kid without a father spends his life collecting fathers,” and honored “good men.” In recognizing musicians such as Horace Grigsby, the art reminded viewers that the Third Ward fostered jazz and blues talent. And just as in the New York show, it noted significant personal bonds with text based homage to mentors and friends, a love note to Bert Long, to David McGee, and others.

I introduced myself to Malone three hours before the opening reception of his Diverse Works exhibition, which I was previewing to write a newspaper article. Installation was incomplete, and he was on his knees painting text into stencil (rapidly!). He asked my forgiveness for not greeting me properly, but it was important for him to continue painting.