The Big Show: A Little Bit of Everything Else

While The Big Show 2012 had plenty of paintings and plenty of craft-based work, the reality is that, as usual, there was a hodgepodge of all kinds of artwork. To wrap up our coverage, I want to look at a few other pieces that caught my eye. 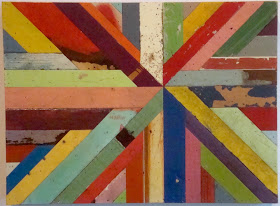 I was talking to Jim Nolan the other night at the opening of a show he curated, and he spoke of the show being about painting without painting. Sunburst by Patrick Renner falls into that ambiguous category. I guess Sunburst could be considered a collage, but what is interesting about it is that Renner achieves painterly effects without actually applying paint to anything. If he had simply painted those colors on a canvas, I don't think it would have been nearly as interesting. The weathered wood scraps not only come with interesting textures and patterns of wear, they come with history. All of this was something else before. 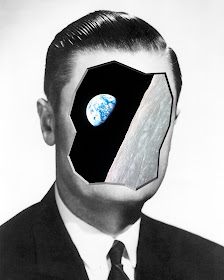 Cutaway Portrait #4 by Edward Ramsay-Morin is a collage of the modern sort--images joined together electronically instead of cutting and pasting actual images. The two images both seem to come from the 60s--a man with slicked-back hair, a black suit, and a skinny tie; and a photo of Earth with the Moon in the foreground, perhaps shot by an Apollo spacecraft. The man's face has been cut-away to show this image of outer space. The cutaway edge is given shading to make it appear as if the man's face was, in fact, a thin shell. The image suggests the phrase "inner space," and given the vintage of the photographic elements, one is made to think of such 60s-era explorations of "inner space" through psychedelic drugs, through meditation, through religious and shamanic ritual, etc. This juxtaposition of the human-scale with the cosmic also reminds me of William Blake's "Auguries of Innocence":


To see a world in a grain of sand,
And a heaven in a wild flower,
Hold infinity in the palm of your hand,
And eternity in an hour.

Another piece that juxtaposed two unlike things together was Katie Wynne's weirdly beautiful Untitled (Satin). An insect-like device wriggles its "legs" on a piece of satin, gradually balling it up. The device is actually a motorized tie-rack. (Question: who on earth needs a motorized tie rack? Just curious.) The shiny black carapace and legs give this piece a decidedly creepy presence, while the blue satin radiates the appearance of luxury. The motion is hypnotic. I assume that from time to time, the tie-rack must be turned off and the satin flattened out. This is a kinetic sculpture, but it requires human intervention. What I loved was that it has a strong effect with a minimum of elements. 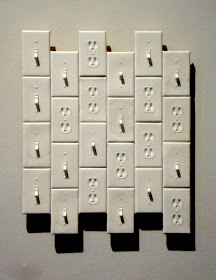 The first three pieces mentioned in this post were essentially made of found objects--old wood, repurposed images, a piece of cloth and a motorized manufactured item. When I looked at Power & Priorities by Tommy Gregory, I thought that this, too had been assembled out of found objects. But strangely enough, Gregory went through the trouble to cast the light switched and power sockets with resin. That seems like an unnecessary extra step. Still, the piece works. It may be the oldest trick in the conceptual playbook, but there is something about taking a thing that we are used to seeing in isolation and grouping it with many similar or identical things that works, as Tara Donovan has proven many times. 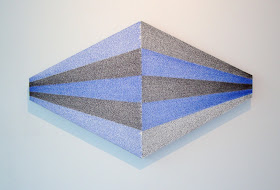 Similarly, John Adelman's piece Esdras (Duelist) is created using a repetitive process. He may be writing words out from the dictionary with his gel pens. Whatever the source of the words, his technique for writing them renders them illegible. They become texture and value instead of words. By using a very precise process or algorithm to create the piece, it becomes something that in theory, anyone could execute by duplicating his process, like a Sol Lewitt wall drawing. But it is extremely unlikely that anyone would voluntarily duplicate the obsessive routine Adelman used to create this piece. 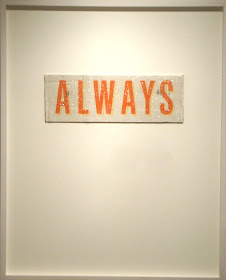 The few pieces I've seen by Kassandra Bergman, including another one in this show called My St. Mark's Place, have been photographic. But I haven't see enough of her work to know if Always is an idiosyncratic work for Bergman. I can't precisely say why this piece appealed to me. It combines elements that are optimistic and glamorous--the glitter, the word "always"--with elements that seem mundane and boring--the nondescript sans-serif font, the minimal design. The glittery center with its promise of eternity is surrounded by a flat plane of white, a non-space, a nothingness. It makes one question the value of "always." It's like two people pledging eternal love without taking into account the daily sameness a marriage can become. (Maybe that's what I'm seeing--a reason to be thankful I'm single.)

In the end, Marco Antonini's Big Show was not unlike the others--a combination of pieces designed to appeal to the eye, pieces that demonstrated mastery, and pieces that were conceptually interesting--sometimes all in a single work. But I commend him for increasing the breadth of the show in terms of the types of work displayed while exercising his curatorial prerogative to brutally edit the show.  I hope future curators follow his lead.