As I mentioned before, I have a pile of comics and graphic novels I want to review. The pile has been growing for a while, in fact. It's hard to make the time to review them, though--there is always another damn art exhibit to write about. And that art exhibit will be up for a few weeks and then be gone forever, while the comics will still be there. So I tend to prioritize reviews of art exhibits over comics.

But since we are deep in the summer, when the art world slows down and goes on vacation, I figured I better use this slow period to talk about some of the comics that I've found interesting recently. In this post, I look at recent books by two of the living masters of comics, Joe Sacco and Joost Swarte. 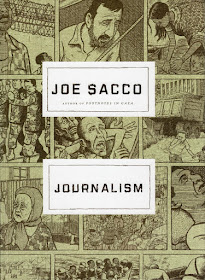 Journalism by Joe Sacco (Metropolitan Books). Journalism collects Joe Sacco's relatively short journalistic pieces. If you are familiar with Palestine and Safe Area Gorazde: The War in Eastern Bosnia 1992-1995 and his various other works of reportage/history, these works will feel familiar. He has an approach--both in terms of gathering information and presenting the results--that is well-established. This genre, journalism done in comics form, was practically invented by Sacco.  The pieces here vary in effectiveness, but at their best, they are gut-wrenching. 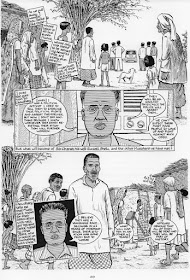 His lengthy piece "Kushinagar" dealing with the lives of Dalits (formerly known as untouchables) in India is unusually bleak. After following the story of various Dalits, traveling from one village to another, he meets some Musahars, a sub-caste of Dalits who are considered untouchable even by other Dalits. They survive by taking rice from rat holes.  A lot of Sacco's stories have a hopeless quality. We are meant to feel sympathy for his subjects and anger at the injustice they suffer, but rarely do we get the impression that there is an exit for them from their plight. Perhaps that is outside Sacco's purview.

One criticism I have of Sacco's stories is that he is too engaged. He writes in his introduction that he is against the idea of "balance" or "he said/she said" journalism, but I think he errs too far on the other side. His stories so often feature oppressed people and the villains who oppress them--they come off as black and white. In "The Unwanted," about illegal migrants from Africa who end up in Malta, he talks to many Maltese who are uncomfortable about having to absorb so many African men into their small nation. That seems like balance, right? But just so you know which side he's on, he devotes a substantial number of panels to anti-immigrant firebrand Norman Lowell--who turns out to be an out-and-out Nazi. Talk about stacking the deck! 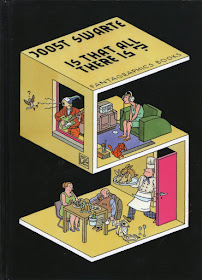 Is That All There Is? by Joost Swarte (Fantagraphics). Joost Swarte is a brilliant Dutch cartoonist/designer/architect. Is That All There Is? collects comics from 1972 to 2010. The title is a bit deceptive--Swarte is not a prolific cartoonist, sure, but he has done a lot of great comics-like work that is not included here, including several volumes of Passi Messa. In addition to that, there is his illustration and poster work. In short, a Swarte fan like myself can still hope for several more books of his work. 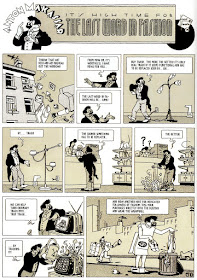 Swarte's work is characterized by an elegant sense of design, uniform-weight lines, and flat colors. In short, you will see a lot of Tintin in his work. Swarte, in fact, coined the term for comics like those by Hergé, George McManus, Edgar P. Jacobs, etc.--"clear line" comics. These are comics almost completely lacking in any kind of chiaroscuro, hatching, varying line weights, stippling, etc. It is a very exacting way to produce comics, but the results can be visually dazzling.

But what readers unfamiliar with Swarte may notice reading this collection is the underground comics sensibility on display. We see the elegance of Swarte's drawing and forget that he came out of the counterculture. He may have been influenced by Tintin, but he was equally influenced by R. Crumb and the Provos. So some stories are a bit uncomfortable to look at--the two stories that deal with anticolonial actions by the "Berbers" employ an old-fashioned racist drawing shorthand to depict the vicious Frantz Fanon-influenced rebels. Swarte's character Jopo de Pojo likewise is drawn in a way that could be read as a racist caricature. This kind of épater le bourgeois strategy (particularly the liberal bourgeois) was common in underground comics. 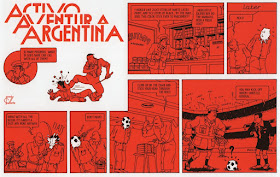 Also typical of the underground is to take a radical stance in a way almost guaranteed to be offensive to some of your own allies, as in this grimly funny comic protesting the participation of the Dutch soccer team with a match being played in Argentina during the "Dirty War." This is the kind of thing you're not supposed to make jokes about. And to me, the elegant design combined with the savage humor is weirdly (but interestingly) discordant. One expects a more expressionist approach for this kind of thing. But what makes Swarte such a great cartoonist is that he continually undermines ones expectations. This is true even in his career--he became an architect rather late in life.

One thing that disappoints about the book is the design. Swarte is a master designer, but this book feels like design took a back seat to efficiency. The back cover is especially--and unexpectedly--boring. This is really not what anyone familiar with his work would have expected. But what is important, I suppose, is what's inside.

Next up--comics I found out about from Kickstarter.