Contemporary artists are slowly approaching infographics. I think there is a wealth of publicly available data out there that they haven't (as far as I know) tapped into, but the look of infographics is inspiring some artists. Susan Doyle refers to the colorful grids of infographics in her paintings on view at P.G. Contemporary. 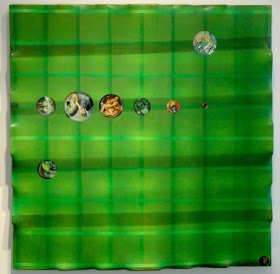 So in a piece like Yoycanti, one can think of the grid as representing two dimensions of measurement while the size of each circle is another dimension. This is a handy and common way of depicting things that have three measurable aspects in two dimensions. But Doyle isn't actually measuring anything, as far as I know. She's using this style of visualization as visual inspiration only. What are the dots? They are images of paintings, cartoons, or images taken from her own print work. They are painted on canvas which is glued to the larger canvas grid. 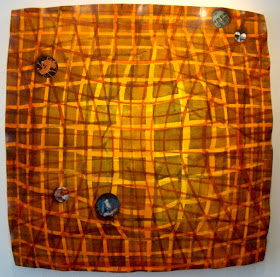 The pieces are described as being on "shaped canvas" but the dimensions are square. In these photos, they look a little lumpy. And in fact they are. Here is what XS looks like from the side.

These paintings have a sculptural presence. They are reliefs in a way, with complicated topographic surfaces. In the case of XS, the surface--the actual surface--seems to playfully contradict the two painted grids, which themselves are in opposition to one another. One bows out toward the viewer, while one bend into the canvas. Each reminds me of visual depictions of space-time, where gravity bends the shape of space. The complex physical surface of the canvas could be another map of space-time, and the circles in this case could be gravitational source--stars, for example. They could be this, but what they are, again, are images. For instance, the one nearest the top of the canvas is taken from a print by Doyle. 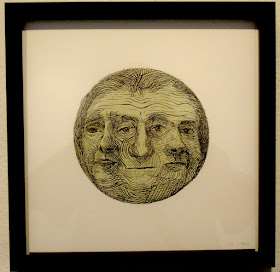 In the rear gallery at PG Contemporary, Doyle has 12 lithographs on display, all quite different in content and style except that they are all circular. Some, but not all, of the circular images inset into her paintings are from this series, but hand-painted and smaller than the lithographs. Madoff Skilling Lay, with its fine lines and pale green ground, looks at first glance like the center of some very strange piece of American currency. Maybe it could be used on a negative one billion dollar note. Of course, if Doyle had wanted to make a Houston-specific rogue's gallery, she could have included R. Allen Stanford in the place of Madoff.

Of course, what is really bizarre about this image is that the three heads share eyes. One thinks of the Graeae, the three Greek sister goddesses who shared one eye. But in this case, I think the shared eyes is meant to emphasize the commonality of these three financial villains. 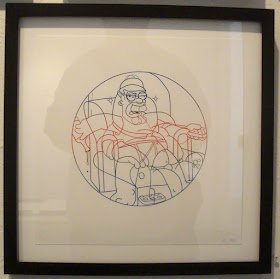 In Homer Peter, shared eyes also shows the similarity between figures--in this case the animated cartoon characters Homer Simpson from The Simpsons and Peter Griffin from Family Guy. Family Guy has often been criticized as being derivative of and inferior to The Simpsons. Certainly in the way the characters look, there is truth to this claim, as Doyle shows here. 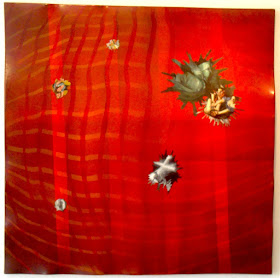 Despite the shared visual elements in the lithographs and the paintings, the two sets of work feel very different. The lithographs each have one idea--they each speak to one thing in a clever, satirical voice. The paintings, by mimicking infographics, feel like they are taking a broader view. They are pictures of our culture, as represented as data. What the two bodies of work have in common is that they are both visually striking.