It's fairly common to be disappointed with The Big Show. Every year, we get this visual assault, a cacophony of conflicting, self-negating artistic ideas. There is too much to absorb and it is too hard for us to think of individual pieces in isolation, even though that is necessarily the way to view the show--after all, there is no theme, no idea behind the show. A bunch of people showed up with art and a no-doubt overwhelmed juror tried to whittle it down for us.

That said, this edition of The Big Show is different. The juror, Marco Antonini, was way pickier than his predecessors. There were only 69 pieces in the show. And beyond that, many of the pieces were quite small. It made the experience of viewing the exhibit a lot less overwhelming. Does this mean that the art on display didn't sometimes seem at odds with itself? No--I think that is a feature inherent in any big open-call juried show like The Big Show.

I want to look at a few of the many pieces in the show, and as I did last year, I'll try to slot them in some kind of logical structure--a structure that doesn't actually exist in the show, mind you. I just have a compulsive need to find some kind of order.

So first, painting. Painting tends to dominate The Big Show. I'm told that this is because the vast majority of artworks submitted are paintings. But this edition of The Big Show felt somewhat less dominated by paintings. Thirty percent of the works on display are paintings and several more are painting-like objects (like what would you call Patrick Renner's Sunburst, made of found painted wood?). 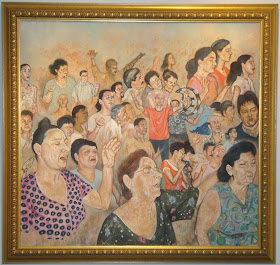 When one thinks of Christian art, we think of images of those being venerated--Jesus, Mary, figures from the Old Testament, various saints, etc. Paintings of worshipers are more rare. In the history of Christain art, there have always been worries that images of Christ or other religious figures might be idolatrous. There were two periods of Iconoclasm in the early Orthodox church when such images were banned. But in medieval Europe, Christian images were part of the means of communicating the faith to a largely illiterate populous. But we live in the modern world, where literacy is common and images are ubiquitous and therefore relatively powerless (think of how a medieval peasant reacted to a mosaic of Christ compared with someone today sitting at his computer who can see hundreds of such mosaics at the click of a mouse). Or as Bob Dylan wrote, "flesh-colored Christs that glow in the dark/It’s easy to see without looking too far /That not much is really sacred" ("It's All Right, Ma (I'm Only Bleeding)"). So what's a painter to do?

Norberto Clemente's solution in The Worship seems sensible. He honors the worship itself instead of the worshiped. The worshiped is there by implication. But the ecstatic worshipers, hands raised and eyes closed (an aspect that I associate with Pentacostal worship) show the power of their religion.

It is interesting that Clemente doesn't try to depict a real space. Instead, he has created a montage of figures that overlap. This overlapping creates an implied space, but it is in no way a realistic space. (Unless you think this congregation has three giants in it, as seen in the upper right.) Where else do you see montages like this? I can think of two pop-culture sources. This type of montage composition was common on paperback book covers and comic-book covers in the 50s through the 70s. Clemente uses montage to effect a group portrait of expression of religious faith. 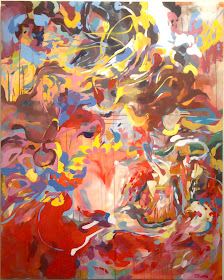 I can't speak about Stephanie Toppin's art without making a disclaimer--I own some of her work. A lot, actually--two paintings, a collage and several drawings. (I wish I owned her couch that Jim Petersen, Jr. has.) So objectivity is out the window. But I can say this--Toppin's work has evolved, even though she is still working in the same brightly-colored abstract idiom that she started with. No. 87 has drips and areas where colors blend and mottled. In short, the work is becoming more painterly. I think she may be looking at some abstract expressionist painters or color-field painters. When I think of painters who approach this kind of intense color, I think of people like Sam Francis or Helen Frankenthaler. But because they were working with thinned-down paint, their work has an airy softness to it that Toppin's doesn't. Toppin's paintings are dense and opaque. For someone who has been observing her work for quite a while, No. 87 represents a maturing. This work is less poster-like than her earlier work. She's working the paint in a way she didn't before. Toppin is still on a journey as a painter, and I'm interested in seeing the direction she's moving. 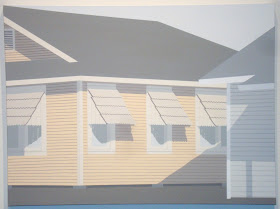 Cary Reeder paints houses. There is a high level of precision in her work, as well as a degree of simplification (for instance, the shingles in Three O'Clock Shadow that are depicted as a flat grey shape). At first, I was reminded of Edward Hopper's house paintings. Of course, Hopper liked his shadows dark and rich. The sun-bleached pastels of Reeder's paintings make me think of Fairfield Porter's palette. I like compositions--angles and squared-off lines--that almost feel like a geometric abstraction. The utter lack of human beings in her work is slightly unnerving. But despite that, the feelings paintings like Three O'Clock Shadow induce are a middle class version of luxe, calme et volupté. In that way, too, Reeder's work recalls Fairfield Porter. 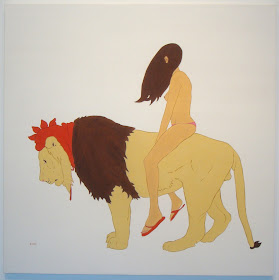 Hogan Kimbrell had a piece in last year's show that was similar to the piece in this year's edition. Both last year's Athlete and this year's Lion Tamer feature outlined figures against a white background. But The Lion Tamer is a stranger, funnier work. A beaten-down lion, forced to wear a coxcomb which perhaps symbolizes his humiliation is ridden by a nearly naked young woman. The erotic is a big part of Kimbrell's work, as can be seen on his Tumblr. HKStash. The Lion Tamer in particular seems to be dealing with sexual dominance, but does it without resorting to the cliches of dominance. This is no painted Fifty Shades of Grey. It is simultaneously allegorical and psychological. 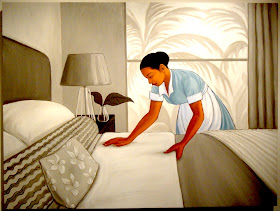 Kay Sarver has a series of paintings called "The Unseen" in which she paints a person whom we might overlook--a lawn worker, a janitor, a busboy, etc.--in color while painting everything around them in sepia tones. Although her website doesn't specify it, I assume that Room Service is part of this series. Compared to Sarver's more folkloric work, "The Unseen" is quite restrained and is all the better for it. Room Service is beautiful and poignant. Her painting her reminds me a bit of the illustrations of Jacques Loustal--and that is high praise.

Of course, there were many other paintings in The Big Show. I can't say these five were typical because no particular type of painting was typical. These are five that caught my eye--that's all.

But as I said above, painting was not as dominant this year as usual. In the next installment of this review, I will look at an unexpected (but not unwelcome) trend in the show--craft-based work.