Back to School with Candace Hicks

Candace Hicks has produced a series of silkscreens based on a simple pun. They simulate the old composition notebooks that many children used (and perhaps still used, for all I know) in school--saddle-stitched with rounded corners and a black and white random pattern on the cover. Her silkscreens are titled Composition in Green, Composition in Orange, etc., and each feature a dense cover design in that color. The pun isn't all that clever, but the silkscreens sure are pretty. 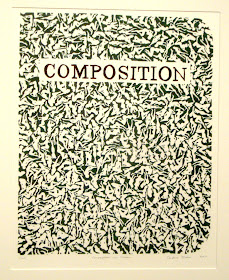 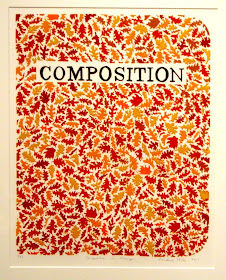 Hicks can be forgiven for producing these relatively slight works (in multiples no less) given that the rest of her work is so labor-intensive. The starting point is the same--old school composition notebooks. She evidently fills them up with her thoughts about whatever she has read recently. She is writing about literature. But she isn't composing a composition--the writing is a bit too scattered. They seem more like notes or a diary.

The thing is, I suppose she could have just displayed her actual notes, but would anyone have read them? I know I wouldn't. But what she did instead was to laboriously recreate the notes in oversized hand-embroidered fabric "composition books". As she writes in her blessedly cant-free artist statement, "By laboring over a dime store composition book, painstakingly recreating it by hand, I have found a way to express the insignificant as potentially philosophical." 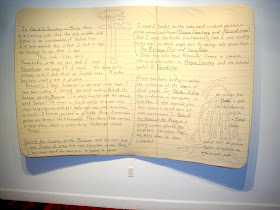 Candace Hicks, Leaves of a Feather, embroidery on canvas, 6' x 10'

Leaves of a Feather is a mammoth example of this, a two page spread mounted on a wall, discussing unusual phrases and words that Hicks finds in multiple books. This is her prime subject--the coincidence of finding repeated words or other literary elements in disparate books. She constructs a theory for this (a theory that goes beyond the fact that these coincidences have no meaning whatsoever and merely reflect the human mind's well-known propensity for seeing patterns even when none actually exist). Thankfully, she labels her theory "pseudoscience," and it seems more literary than scientific--Borgesian, one might say, with a generous touch of Anglo-American science fiction. (Her reading seems quite broad, but it includes lots of science fiction.) 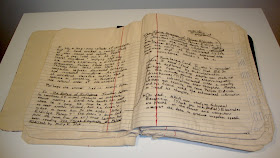 Her masterpiece in this Borgesian-Dickian genre is String Theory: Understanding Coincidence in the Multiverse. Usually when visual artists ask me, the viewer, to read lots of text as part of their art, my eyes glaze over. Standing in a gallery is just not conducive to reading (and most artists are absolutely terrible writers). But flipping through this enormous embroidered book was quite compelling. It helped that the subject, an examination of various works of literature from an unusual and amusing angle, was one that interested me. And she breaks up the text with pages of drawings, where she plays with the lined format of these books, exploding it in one page, showing the process of drawing/sewing the lines in another, etc. (Mexican artist Hugo Lugo has also played with blue lines on paper this way--which struck me as the visual arts version of the literary coincidences that Hicks describes--which is itself kind of a meta-coincidence.) 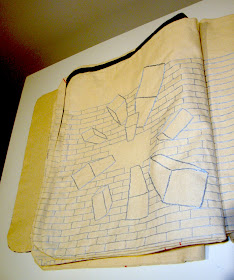 But the main event is her writing. And she's right--one might just ignore these writings in a composition book, or even typeset and published in a chapbook. There is something compelling about the format she has chose, and flipping the heavy canvas pages is curiously pleasurable. I sat in that crowded room, tuning out the conversation, and read through it. 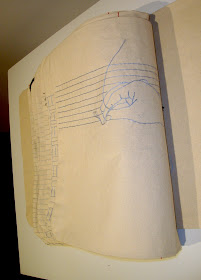 This work contains contradictions. The casualness of a diary or set of notes is contrasted with the  labor-intensive means of reproducing them. The male-ness of much science fiction  and the culture that surrounds it is contrasted with the female-ness of embroidery, a traditional woman's art that has historically been neglected by art historians in favor of "male" arts like painting and architecture. Hicks collapses these contradictions, at least temporarily, in this exhibit.