When I went to Emily Sloan's Baby Ruth in a Swimming Pool at Darke Gallery, I expected a literal re-enactment of the Caddyshack movie's eponymous gag, which became a cultural meme long before a meme was anything but an esoteric term in evolutionary biology. 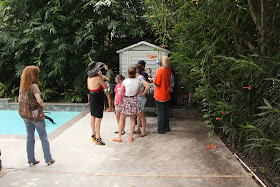 some of the many Darke Gallery diehards

When I arrived in the middle of the sweltering summer Saturday, I was impressed by the attendance. The crowd maintained a consistent size of about ten as people rotated in and out viewing, drinking a beer or a glass of chardonnay, eating a mini-Baby Ruth or two, and putting the two valets through their paces. And of course, there was Emily in the pool, which was not what I expected but what I should have expected. 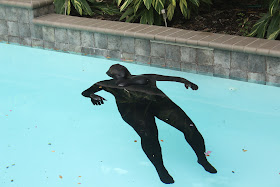 At first glance, I thought she'd constructed a life-size, human float. But upon closer inspection I realized... 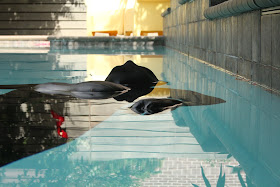 ...that the floating dummy was Emily, serene and silent, floating in the pool like a Baby Ruth in a swimming pool or a turd in a punch bowl. 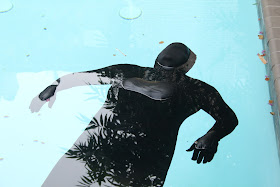 Having attended other performance pieces of Sloan's such as the Nap Convention or Carrie Nation, I'd expected more interaction. I waited. There wasn't. After I thought about it, drinking beer and gnoshing on mini-Baby Ruths, I realized that she wasn't even the star of the performance. Fellow artist David McClain pointed out a Baby Ruth (or a shit that looked like one) that had sunk near the pool steps. I felt justified for now I had my literal interpretation/re-enactment. But then in light of the brown log, her roll became even less clear. Was she the protector of the Baby Ruth? Its doppelganger? Was she keeping it company? Was she communing with it? Was she saving it for later? 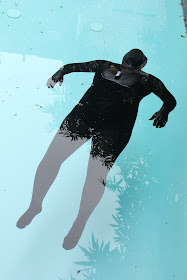 Sloan with mini-Baby Ruth balanced on her bosom by some  asshole, a.k.a. me.

Another anomaly for a Sloan show was the role of the audience. Usually in her performances, the audience has a clearly defined participatory role. In Wash, we were washed. In Nap, we slept. In Carrie Nation, we were scolded for the degenerates that we were assumed to be (and probably were, it was after all at Notsuoh). In this performance, nada. Disoriented and without direction, I decided to define my own role and placed a mini-Baby Ruth on Sloan's chest.

Now, lying in the water, Sloan not only looked tranquil and cool, but she attained an art historical reference. Her position, costume, my prop, and the blue of the water resembled Matisse's cutouts, specifically Matisse's Icarus from his 1943 Jazz book. 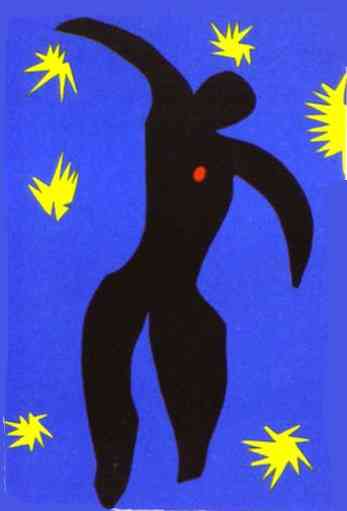 After I initiated interacting with Sloan, another attendee put pink sunglasses on her. Perhaps this was an act of charity. (It was sunny.) Perhaps, it was an act of gamesmanship (to one up me). Perhaps, it was an act of fashion. (The pink glasses did "pop" against the black outfit). Regardless, that only upped the ante. I couldn't leave well enough alone. I removed the wrapper from the candy bar. When I left, Sloan was in the following state. 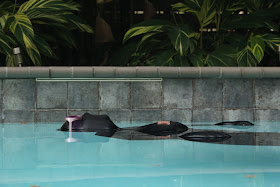 On my mini-Baby Ruth-fueled drive home, I wondered about the purpose of the performance. Unlike most performances that I've seen/read about involving water, this one didn't equate water with life or rejuvenation. Rather, the water seemed to be a fluid in which a solid substance (one Baby Ruth candy bar or one female artist or both) was temporarily dispersed via agitation to create a suspension.

And so, I'm still waiting for the purpose of the piece to settle to the bottom of my mind.