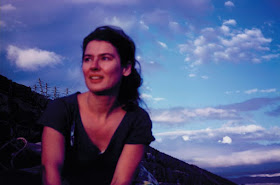 Gertrude Barnstone in Mexico in 1959

From Honkytonk Gelato (1985) by Stephen Brook:


At the Contemporary Arts Museum, which was packed with contemporary artists who'd flocked to the Christmas party, with romping children and adults drinking, a painter was complaining to me that the slump in oil prices had also meant that corporations were buying less art. Houston was no longer a lucrative market for a large crop of artists.

"Do corporations know a great deal about modern art?"

"Zilch. See that guy over there? He's an art consultant. He tells them what to buy."

"Does he know a great deal about art?"

"You gotta be kidding. And you'll find a lot of us resent that people like him are determining what gets bought and what doesn't."

After an hour Gertrude Barnstone, who'd invited me, retrieved me and took me off to another party, at the Art League. We soon located the room with smoked salmon and cornered a table. With my mind dulled by the easy-going blandness of Dallas, to meet someone like Gertrude was refreshing. She was a feminist and quite radical in her politics. I wasn't used to that in Texas. [...] All over Texas I'd either had to keep my head down or explain myself. With Gertrude I could relax, as it became obvious that many ideas and values were shared and did not have to be either  tactfully suppressed or strenuously established. She was puzzled by my surprise at this, not knowing--how could she?--that endless conversations about property prices and skiing trips had begun to anesthetize my brain.

I read this when I was living overseas in the mid-80s. I had no idea who Gertrude Barnstone was, but it was quite thrilling to be reading about the art scene in Houston as seen from the point of view of a witty English travel writer. Since then, I've met Barnstone a couple of times with the Friday morning artists breakfast club. She's 87 years old and still sculpting, although she has a helper do her welding for her now. An artist and activist, Gertrude Barnstone belongs in the small pantheon of great Houstonians. 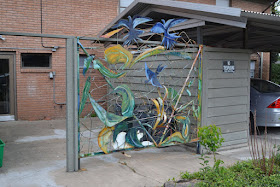