Ray Smith isn't exactly an artist who I would expect to create large flat abstract paintings. His other work is figurative and has a neo-expressionist feel. But something about working with G.T. Pellizzi has allowed for a different artistic persona to emerge. The pieces in this show are austere. They suggest empty landscapes with sparse population. Quite unlike the Ray Smith carnival one finds on his website. 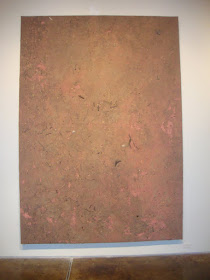 G.T. Pellizzi's solo work, as far as I can tell, is also a a bit less barren that the paintings in this show (although not figurative like Smith's paintings). And in their other collaboaration, The Execution of Maximilian, where the process of making the pieces was ambiguously macho (shooting shotguns at cans of paint), the resulting works were literally splashy abstractions.

Smith is from South Texas and his family owns a ranch, Yturria Ranch, there. Pellizzi is from Cuernavaca, Mexico, and works both in the U.S. and Mexico. While their collaboration is relatively new, the artists have known each other for a long time. Given Smith's own border-land origins and Pellizzi's immigrant status, it seems natural that they would be attracted to "the border" as a subject. While the work in The Execution of Maximilian addressed more sensational aspects of the border (narco violence, machismo, the tradition of the gentleman hunter, etc.), the paintings in this show address the land itself. 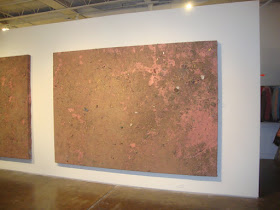 The large, spare sandy paintings look like segments of flat, barren desert as seen from above. They each come across as a specific portrait of a precise 96 square foot area of ground. It is the act of putting them up on the wall vertically that is so surprising. They feel like they should be floor pieces. On the wall, our perspective changes and it's as if we, the viewers, are floating above the earth--not too high, but not with our feet on the ground. We are forced to se the ground differently; something we might normally pay little attention becomes our focus. 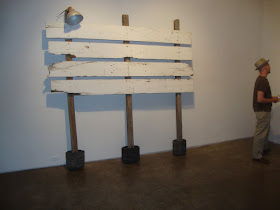 Pellizzi and Smith aren't willing to let you off scott free to contemplate the Earth. The big, somewhat blank Border Paintings allow one to imagine a desert devoid of human population. And while parts of the border are very sparesly populated, it's never completely untouched. Using scrap material and fencing reminds us of this. Fencing may remind us of the border fence, but more prosaically the fences people put up to establish property lines, to keep livestock from getting lost, etc. Barriers. It breaks up the land which Pellizzi and Smith are portraying. 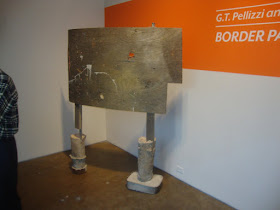 The worn wood and cut up tires that make up Border Sign tells us people are here, but the work conveys loneliness. The blank non-communication of the sign suggests a laconic race of people. They don't have much to say and there aren't to many other folks to say it to anyway. This kind of approach validates a cliche we have of the area, one which certainly isn't completely true. But given The Execution of Maximilian, the two artists may be working through such cliches of the border one by one. These preconceptions can be powerfully expressive--I think you see that in the work of James Drake or the writing of Dagoberto Gilb. And given Smith's deep roots in the area, I can forgive him for misdemeanor stereotype-mongering. The work is too strange and too strong to be undermined by that.