People Keep on Painting in Houston

Twenty-seven years ago, the Houston Museum of Fine Art mounted an exhibit called Fresh Paint. It featured work by 44 painters and attempted (unsuccessfully) to define a Houston school of painting. Aaron Parazette's goal with In Plain Sight (on view at McClain Gallery) is more modest. In the catalog for the exhibit, Parazette wrote, "While there has been no shortage of opportunities to see paintings created by Houston artists, the opportunity to consider a large group of such work has been missing." That is one thing In Plain Sight accomplishes. Another, perhaps, is to introduce collectors to the work of local painters they may not have yet seen. McClain is a blue chip gallery, and being shown there potentially provides entrée for artists who have mainly shown in alternative art spaces or smaller galleries.

Parazette adds that "the exhibit is non-thematic and multi-generational by design, with the work selected to represent a full range of painting being made in Houston." The word "multi-generational" jumped out. Many of the Fresh Paint painters are still around and painting. Were any of them were included in In Plain Sight? Just two as far as I can see, Gael Stack and Perry House.

Unlike Fresh Paint, In Plain Sight makes no claims for its content except that it is broadly representative of work in Houston. However, choosing to do a painting show implies that painting is really important in Houston. And let's acknowledge that painting is the most economically viable fine art in town. It's easy for galleries and art fairs to show and easy for collectors to acquire. It doesn't require a lot of floor space to display it. It lasts a long time. It's highly optical. And this show certainly demonstrates that there is painting being done for all tastes. (But I'd like to see similar shows for other genres of contemporary art in Houston--as well as shows for those liminal works that don't easily fit into one genre or another.)

Here are a few--but just a few--of the paintings in In Plain Sight that I liked. The show is up through October 13, and I highly recommend stopping in and checking it out. 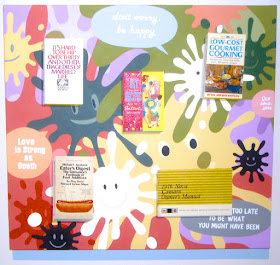 It was nice to see a Bill Davenport painting if only to remind us that Bill Davenport can paint very well. I don't think of Davenport as a painter per se--Bill's Junk is sort of a social sculpture, and a lot of his other work is sculptural, participatory or both. But painting is a part of his work as well. 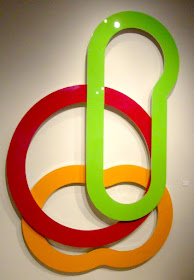 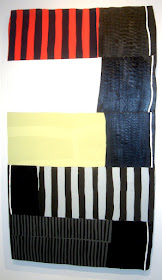 It's hard for me to imagine Jeremy DePrez making a work titled Totem, much less a colorful Sean Scully-like painting like this. But he did and it's great. 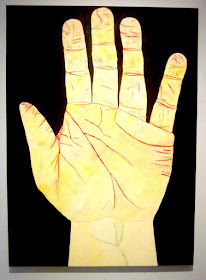 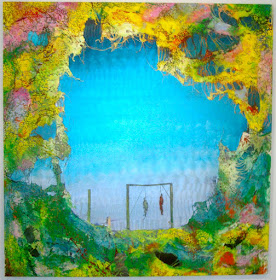 Mark Flood has split his painting into two streams--cynical dyspeptic misanthropic paintings on one hand and beautiful abstractions incorporating lace on the other. With The Things, he seems to have achieved a synthesis of the two. 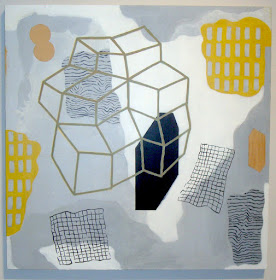 Pat Colville is someone who should have been in Fresh Paint but wasn't for some reason. She's a Houston art treasure. She does paintings that make me think of biological or mineralogical  forms seen under a microscope. I love the way the forms float. 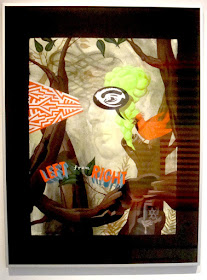 I wasn't really aware of Ryan Geiger's work when I saw this piece. The text and the fine rendering give it a hint of Wayne White. I certainly want to see more of his work after seeing this piece. 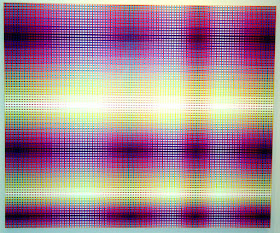 Susie Rosmarin's optical effect paintings are hypnotic. But it's difficult to get their colors right in a photo--which is my way of apologizing for getting them wrong here. Just go see the exhibit! 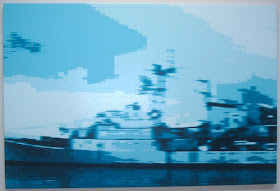 William Betts is best known for his paintings based on images from CCTV surveillance. This image of a warship seems to be filtered through some digital imaging system, which gives it a curiously in-the-moment feeling. 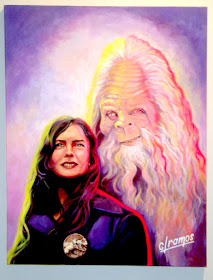 Cheyanne Ramos has incredible painting skills, but she isn't showing it off in Item and an earlier similar painting, Kerri Green and the Living Unicorn. She seems to be playing with the concept of "fan art," including the awkward painting (those bizarre highlights, for example) and the weird couplings. The funny thing (for me, at least) is that the pop culture references fly right over my head. I think these figures exist in some pop culture property, but I have no idea which. I also love her snazzy new signature.