This weekend was the beginning of the fall season, when most of the commercial art galleries and a lot of the non-profit spaces have openings. An exhilarating, exhausting time, it is also a time to take stock. What's changed since the last time I wrote one of these posts? A lot. Bryan Miller Gallery in Isabella Courts closed. Sicardi Gallery opened their beautiful new space on Alabama, and New Gallery took the space next to P.G. Contemporary on Milam. (And the old Sicardi Gallery space on Richmond is being used for the moment by next-door neighbor McClain Gallery, but I don't know if that's permanent.) But that's all relatively old news. What's new to me is that Peel Gallery has apparently closed. Last weekend, instead of the usual Peel Gallery show (which I thought were often excellent), there was a pop-up exhibit by Nick Barbee. I emailed Peel Gallery for a confirmation, but did not get a response in time for posting. (Update: Peel Gallery confirmed their closure. Owner Steven Hempel is running Hempel Design and will be installing a Gabriel Dawe piece at the Houston Fine Art Fair.)

Also exiting the scene is Goldesberry Gallery, which had their final opening this weekend. The gallery will remain open through Christmas to sell off its remaining inventory. Owners Oliver and Nancy Goldesberry are retiring. They opened the gallery in 1991 and have made a good run selling inventive and artistic craft items here in Houston. The role that Goldesberry Gallery plays locally is not one that I think can be easily replicated. You need a gallerist who is an expert on what is happening in the world of ceramics or jewelry or glass, etc. This kind of work gets a short shrift in the art world. Indeed, "craft" itself is highly suspect--partly I think for class reasons. Art has graduated in some ways into on one hand, a kind of practice of philosophical inquiry, and philosophers don't do manual labor, no siree. And on the other hand, art has become a kind of management practice, where the artist conceives a project but has it executed and fabricated by someone else. That's the opposite of the craft ideal, which has been represented in Houston for 21 years by Goldesberry.

To counter all this bad news, some good news is that David Shelton Gallery has moved to Houston, taking the spot formerly occupied by Bryan Miller Gallery.. (Good news for Houston, but maybe bad news for San Antonio.) Shelton had a temporary show here last year, but now he's making it permanent. His gallery was located in San Antonio for five years, so moving is kind of a big deal. I asked him about it, and he acknowledged the advantages of Houston, most important of which is that it's a bigger market. That's one problem with Austin and San Antonio--they're pretty big cities, but the number of art collectors in each makes it hard for galleries to succeed. Art Palace moved to Houston from Austin, and Shelton has now made the same migration from San Antonio.

Shelton opened his new space with a group show of gallery artists. I thought the work was pretty interesting, and that makes me look forward to seeing solo exhibits by some of these artists. Here are some of my favorite pieces from the show. 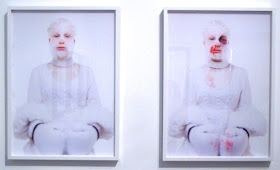 These bizarre photos by Margaret Meehan feature a young, very pale woman with very light hair and, bizarrely, facial hair that looks more animal-like than human. That alone would make you stop and take notice, as would the puffy-sleeved dress she is wearing. But the white boxing gloves and rather brutal before-and-after nature really make the Pugilist uncanny. The model, Amy Revier, is as far as I can determine a very pale artist who does not, in fact, have fur on her face. 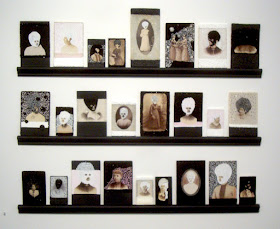 The Haymakers also features hairy-faced women--this time vintage photos of women with gouche and glitter hairdos. The title of the series likewise seems to reference boxing (or fist-fighting in general). 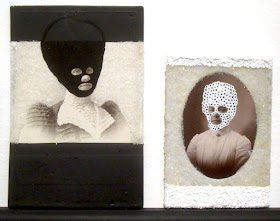 I keep thinking about side-shows and carnivals when I see these images of hairy-faced women. But I don't have a clue what they mean. I can only say that they linger in my mind. 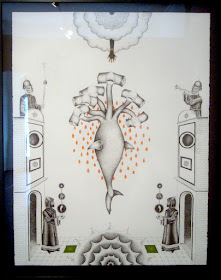 I also liked James Smolleck's Sphere with fixed stars, which came across as Medieval and esoteric, like the illustration in some ancient book on astrology or alchemy. 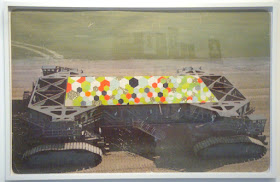 Launch Pad by Kelly O'Connor juxtaposed a washed-out photo of a mighty impressive piece of equipment with a brightly colored (and glittery) pattern composed of hexagons. It's as if she is suggesting, if you are going to make a piece of equipment this huge and this powerful, why not go the extra mile and make it spectacular looking? 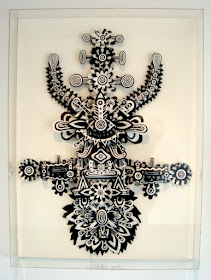 When you go to Michael Velliquette's website, the first image you see is of random bits of paper and board, a pair of scissors, and an Xacto knife. Skin and Bones is the result of this kind of work--a bravura construction of cut paper. Skin and Bones has a somewhat totemic look as if we are looking at a representation of a god of some hitherto unknown culture.