On November 4, 2012, PG Contemporary gallery hosted a performance by a founding member of the Japanese Neo-Dadaist movement, Ushio Shinohara. Shinohara is Japanese by birth. He studied at the prestigious Tokyo Art University, but he grew disenchanted with the strict curriculum and left the school in 1957. His aesthetic veered toward pop-culture rendered in an expressionist style with a kaleidoscopic palette. This approach along with the Japanese art establishments traditionalist views drove him to relocate to New York in 1969. 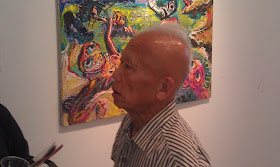 Ushio before one of his paintings

According to Shinohara, the three tenants of speed, rhythm, and beauty unite his oeuvre, which spans different media and subject matter. The boxing painting, however, are far and above my favorite. He has performed them all over the world from MOMA to 3227 Milam Street. I had the pleasure of the viewing and video-taping him as he created one of his boxing paintings. 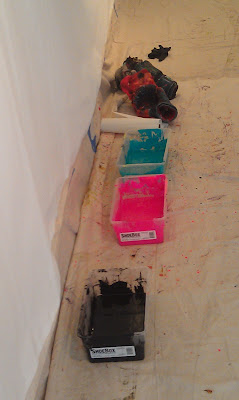 tools of the trade (above and below) 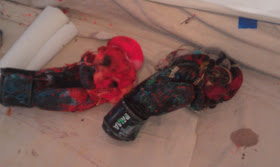 In this video, Ushiro explains to gallerist Zoya Tommy the impetus and evolution of his boxing paintings. Artist Mari Omori translates.

And here, Gyu-chan (Ushiro's nickname, which means roughly "young bull") splat's that big, old canvas with the exuberance and glee of someone an eighth of his age.