Lost in Cyclea and I'm OK with that

I don't know a lot of installations that have their own Facebook page, but Cyclea is one. The show is actually entitled Comeplay Comply Arraycycle and it encompasses more than just the work of Cyclea, which is


...a performative audio/visual/dance project between Jonathan Jindra & Y. E. Torres (ms. YET) that utilizes the possibilities of technology to reconstruct a stylized understanding of their realities into a fused sensory experience.

I stepped into El Rincón Social and realized that I was as close to Psychedelia as I was going to get without placing the a stamp-sized ticket under my tongue. The room had a vibe that was part 60's psychedelic party and part 90's rave. Some of the abstract images projected onto the walls merged into each other. 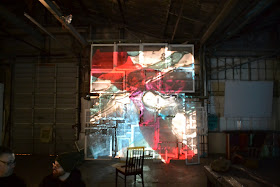 The images were organic: liquid, shimmering, viscious and leafy, filigreed, floral. The film lacked a plot but it had a narrative directions. The images transistioned into one another as if they were orchestrated scenes. 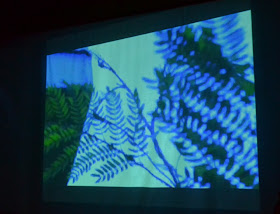 Others appeared and disappeared with slide show finality. 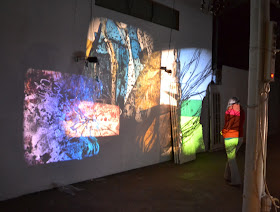 These were Sandy Ewen's microcollages. Each is an abstract collage of natural and artificial materials on 2" x 2" transparent plastic canvases. 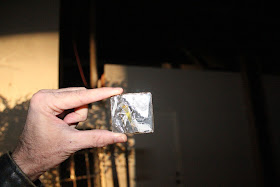 The works are then loaded into an old fashion slideshow carousel and projected on the walls. 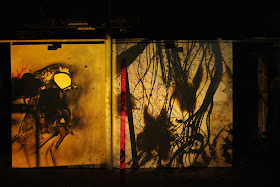 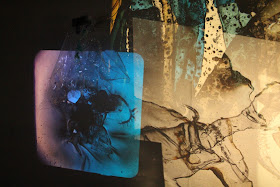 Jindra took digital images of Ewen's microcollages and merged them into a film loop that played adjacent to the stills. They give one a sense of imperfect fractal art or algorithmic art, seen up close, within the interval, before the pattern has a chance to repeat yet alluding to its repetition.

The audio played over the images in that the sounds seemed disembodied and unrelated to the visual cornucopia. The tracks could have been out takes from Hunter S. Thompson audio diary or random recordings from a Metro bus ride. I found them unintelligible at best and irrelevant at worst.

Tucked away in the smaller gallery space was Zubi Puente's work, which I experience as one continuous childhood hallucination. She creates the kind of environments in which you enter thinking you're following Alice into the looking glass and stumble upon the circumcision of a teddy bear. And (and this is a big AND that owes a lot of credit to Puente's aesthetic) be OK with that. 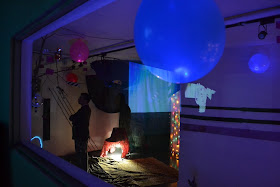 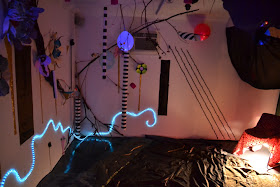 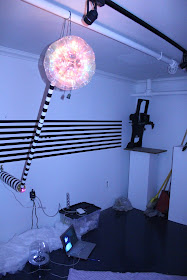 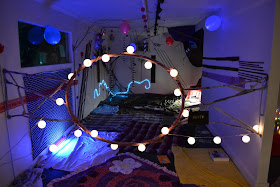 straddled a low corner and a couple visitors were cuddled up on the covered concrete floor either against the cold or for some cold, hard loving. 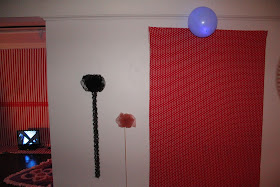 The one anomalous detail were the books scattered on the floor. It wasn't clear whether I was supposed to curl up in a corner and read them or just assume "all those ideas in these books, they apply to this installation, too." If the former were the case, it was too damn dark and I'd have rather cuddled up with the others. If the later was the case, then to quote another audience member "[the books were an] especially lazy move--as if they wanted to refer to these books without actually doing the work necessary to embody the ideas within the work."

Then of course there were the books themselves. One of them was "Getting the Love You Deserve" or something along those lines. That title completely discouraged me from delving into it because my aspirations for love so far, fAR, FAR outstrip what I deserve or would ever be entitled to that I didn't want to learn how unrealistic my expectation are. Obviously, for personal reasons, I never got beyond that book.

The event invite stated "We've enlisted the help of some friends to help fully realize the possibilities of the space." Still, I'm not quite sure what the unifying theme was among Sandy Ewen/Jindra-Torres video-sound installations and Zubi Puente's installation.  Other than space, time, and ms. YET, they seemed to lack rigorous coherence.

For some that may be enough. For others, it's probably not. 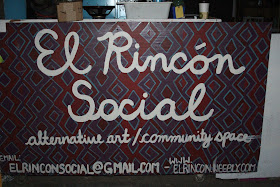 I regret that I didn't stay long enough to get seriously social at El Rincón Social.  However, I did leave with a head full of spray glitter...because ms. YET asked, of course. (Who can deny her?) So I felt I did my part. I'm eager to see what Jindra/Torres will produce from the footage that they record during this show.