Pan Recommends for the week of January 24 to January 30

Curiously enough, Thursday seems to be the big day for openings this week. I guess no one wants to compete with openings at Lawndale and the Station Museum scheduled for Friday evening, and who can blame them. Those institutions always draw big crowds for their openings. So the art weekend begins tonight. Here are a few events that caught our eye. 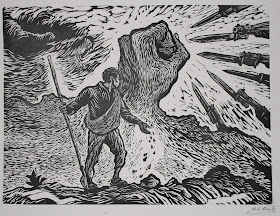 Arturo García Bustos at the Museum of Printing History, 6 pm; runs through April 13. This master printer and painter, who studied under Diego Rivera and Frida Kahlo (as a follower of Kahlo, he belonged to a group that ws called "los Fridos"). Expect to see many dramatic, political,  and somewhat nostalgic images. 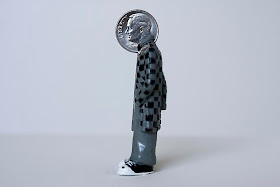 Transitional, curated by María Iovino and featuring work by María Isabel Arango, Teresa Currea, Cesar González, Diana Menestrey, Nicolás Paris, Andrés Ramírez Gaviria, Luisa Roa and Adriana Salazar at Sicardi Gallery, 6 pm; runs through March 16, 2013.  A group show of eight Colombian artists. I can't say much about them, but the images on the Sicardi website are quite intriguing. 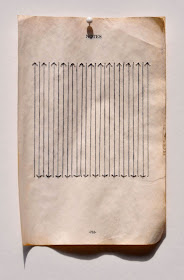 This is a older piece by Abi Semtner

Carrie Cook & Abi Semtner: Doing It Like Dolly Does...How Does Dolly Do It at Lawndale Art Center, 6:30 pm; up through March 21. There are several shows opening at Lawndale Friday, but I especially want to call attention to this show because I've liked the Abi Semtner work I've seen, and want to see what she is doing now. Also, Dolly Parton is the musical inspiration for the show, which is awesome. 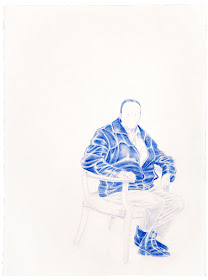 Alexandre Rosa does delicate blue drawings like this one

ProjeXion featuring work by Tim Gonzalez, Devon Britt-Darby, and Alexandre Rosa at Avis Frank Gallery, 6 pm; runs through February 20. Described as "a multimedia exploration of masculinity and sexuality through abstract, homo erotically charged vignettes" and restricted to viewers 21 and older, I anticipate many penises in this show. 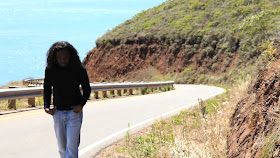 Performance: Kalup Linzy at the Houston Museum of African American Culture, 7 to 8 pm. The CAMH's series of performances continues, this time with Kalup Linzy at the HMAAC on Caroline St. You've seen his videos--now see the artist performing his newest character, Kaye, the Romantic Loner.