Two days after Mark Williams notified me of his Houston exhibition, The Illusion of the Precise: Robert Ryman, Mark Williams, Todd Williamson at Wade Wilson Art through February 2, he informed me he is exhibiting at Fruehsorge in Berlin through February 23. Aesthetic dissimilarity between the two presentations is indicative of the artist’s ongoing experimentation with materials and processes. In an earlier post, Williams spoke of uninterrupted “interest in structure (the grid) and gesture (the paint.)” He also listed a few artists at whose works he looks closely while working his day job as installer at MOMA, some favorites being “Robert Mangold, Brice Marden, Anne Truitt, Donald Judd, Robert Ryman, Mark Rothko, Dan Flavin and Blinky Palermo.” I asked Williams a few questions about his current exhibitions.

Virginia Billeaud Anderson: What do you think about Wade Wilson continuing to link you to Ryman, which he did last year for his Impressions exhibition? Do you perceive any connection between you and Ryman?

Mark Williams: I suspect that Wade recognizes a workman-like connection between us. Both Robert Ryman and I have an investigative approach to art making. We experiment and try new materials in a variety of combinations. I came across this statement and it pretty much describes my approach to art making: the reality of paint and process is a high-priority. I think Ryman would agree.

VBA: Please give me a brief description of the work you are exhibiting at Wade Wilson Art, how many pieces, their size and materials. Tell me about your process.

MW: There are four framed works on paper and one large painting on canvas at Wade Wilson Art in Houston. The works on paper were made using enamel paint, acrylic paint, and alkyd paint. The paint was applied with inexpensive brushes which I purchase at a hardware store. The paper is 14" x 11". I started with a two simple restrictions/rules that I set for myself, use vertical and horizontal edges exclusively, and use only rectangular forms. Oh, and one more rule: all forms must be anchored to at least one edge of the image. By alternating applications of paint and tape, and its removal, surface and image are developed simultaneously. These steps are improvisational, it's a rather organic process. I may repeat this process several times before determining that a work is finished. How do I know a work is finished, it has an intuitive sense of rightness.

The large painting is titled Homage to White (2010, 90" x 72 1/2"). The oil enamel, alkyd, and acrylic paints were applied with a brush. White is the dominant color. It is applied over dark rectangular shapes, radically flattening the pictorial space of the painting. 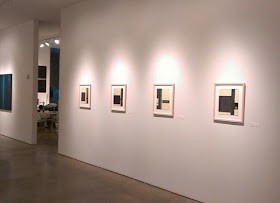 VBA: I’m charmed by a piece you are showing at Fruehsorge in Berlin. Its loopy forms are unexpected and lovely after so many grids. You created this more organic image about the same time you were painting large boldly colored rectangular forms in acrylic on canvas. Say something about these aesthetic variations.

MW: Yes, these artworks were shown recently in Berlin at Fruehsorge Contemporary Drawings. They are made of oil paint on gridded paper. Here the grid has a supporting role. Each sheet is 8 1/2" x 11". I began making works of this group back around 2005. My drawing tool is a piece of found plastic. It has a wonderful elliptical shape and I instantly thought I might be able to use it as both a drawing tool and a printmaking tool. It appealed to me. At the time, I immediately set out to see what I could make with it. I worked on many different papers and on Mylar and plywood, too. The results were hybrids: part drawing, part monotype. They have the appearance of being a kind of writing, glyphs for an unknown language. Again, an intuitive process. Sometimes it takes new tools to make new art. 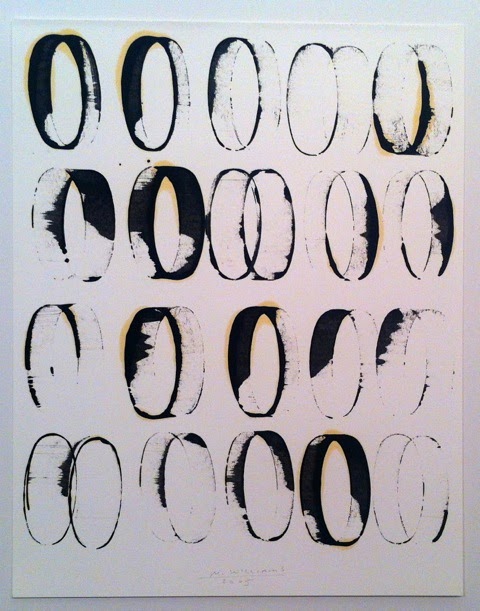 VBA: Do you assign any personal meaning to the circular forms, or is this strictly one of your formal exercises?

MW: Not sure what I expected, however, I was surprised by the sensual forms I made.

VBA: Is there anything you want readers to know about you or your art, particularly something unexpected or not written about in the past?

MW: I am driven by curiosity and process. I have no agenda. Everything you need to know is carried within each artwork.