I want to apologize for not having written very much in the past few weeks. Thankfully the blog didn't go dark due to the efforts of Dean Liscum and especially Virginia Billeaud Anderson. As for me, I've been working on several simultaneous projects (note to self--don't schedule projects so that they must be worked on at the same time). I'm still working my way through these various tasks, but I've gotten some big chunks of the work done and behind me. So I'll be resuming my regular blogging presently.

One of the big projects was putting together a show for EMERGEncy Room at Rice University. EMERGEncy Room is a small gallery space which hosts shows of emerging artists from the Houston area. But the show I'm working on is quite different--it's a selection of original comic strip and comic book art from my personal collection. The show is called Comics: Works from the Collection of Robert Boyd and it runs from March 14 to April 11. The work dates from the 1920s to the 2010s, and as such forms a kind of history of comics--an idiosyncratic, eccentric history, to be sure. I'll be discussing it a little more as the exhibition date gets closer.

Below is the poster image for the show. Certain comics fans may recognize the steady hand of Ernie Bushmiller, the cartoonist of Nancy, who it turns out was quite capable of drawing a sexy, half-dressed women when the occasion called for it. 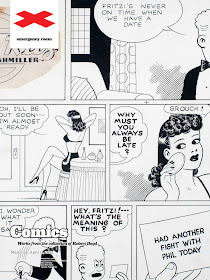 Prior to now, EMERGEncy Room has been an institution above reproach. But now they are showing a collector's personal collection! This drags them down to the level of so many of today's museums with their vanity shows for collectors. The most notorious of these in recent times was Skin Fruit, a show the New Museum drawn from collection of one of its trustees, Dakis Joannou. But Houston's own Museum of Fine Arts has been guilty of this kind of vanity show as well. And now the EMERGEncy Room is sullying itself by showing my collection. Nobody tell Tyler Green!