Picasso was a great artist and a prolific one, whose career lasted 70 years. This is great for curators and museums because it means that every few years they can put up another big Picasso show. All they have to do is think of a hook on which to hang the show that will distinguish it from the 50 previous Picasso exhibits. The hook this time is "black and white."

The Guggenheim and the MFAH have teamed up for Picasso Black and White, curated by Carmen Giménez. The show looks great--the galleries are well-proportioned, and there is just the right amount of wall information. There is something for everyone--the early Picasso with his portraits of gaunt poor people, the analytical cubist Picasso, the synthetic cubist Picasso, the neoclassicist Picasso, the surrealist Picasso, the dirty old man Picasso, etc. And there is a beautifully produced catalog for the show. It's to the catalog we have to turn in order to find out what justifies this particular Picasso exhibit. Why is work in black, white and grey worth singling out?

There isn't a single answer. In fact, the contributors to the catalog each have a different answer, often quite different from one another. And the fact is that all of them could be right to one extent or another. Carmen Giménez locates the source in Spanish artists. She points out that Picasso loved El Greco, whose work was rediscovered when he was a young man. El Greco, she points out, is the most monochromatic of the old masters, and you can see echoes of El Greco in Picasso's early work, such as Woman Ironing (La reasseuse) from 1904. It is monochromatic (essentially black, white and gray) with a gaunt, elongated figure that recalls El Greco's Mannerist distortions. Giménez also mentions the blacks of Vélazquez and Goya (to which one could add the blacks of Francisco de Zurbarán and Jusepe de Ribera). And amazingly, a viewer has an opportunity to compare those painters to Picasso, because the MFAH is concurrently showing Portrait of Spain: Masterpieces from the Prado, which has examples of work from each of those Spanish masters. Especially magnificent and relevant to Giménez's argument is Vélazquez's King Phillip IV in Hunting Garb, which is painted in greys, browns and deep blacks. Picasso revered Vélazquez and quoted his paintings in his later work. 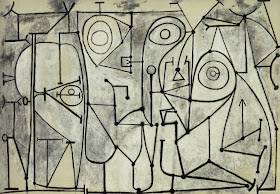 Richard Shiff locates the origin of Picasso's tendency towards black and white in his reliance on touch more than vision. Picasso was also a sculptor, of course, but Shiff points out that drawing itself is very much about touch and contact with the canvas or paper. We think of Picasso as a linear artist, more interested in drawn shapes than areas of color (not that his color was bad). He sits on the opposite pole from Matisse, for example. A work like The Kitchen (La cuisine) exemplifies this.

Olivier Berggruen reminds us that Picasso was an artist of the 20th century and therefore spent his life surrounded by photos and films--particularly black and white photos and films. Dore Ashton comments that when Picasso had a serious message to convey (which was rare), he reverted to black and white, as in Guernica and The Charnal House. These large black-and-white paintings could be seen as reflecting (and competing with) newsreel films showing the horrors of aerial bombing or Nazi death camps. 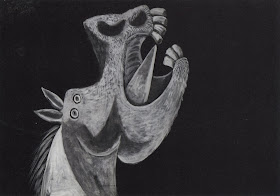 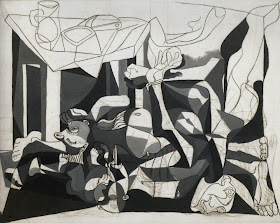 Ashton may be right, but this exhibit shows Picasso using black and white for much more ordinary subjects as well.

(There is a Guernica-shaped hole in this exhibit. One would expect that an exhibit called Picasso: Black and White would include the artist's most famous black and white painting, but I suppose it's too precious to travel.) 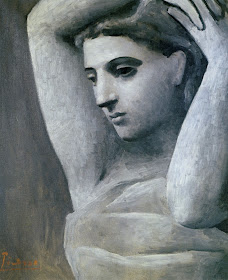 Picasso was a sculptor and was influenced by sculpture--African sculptures, of course, and primitive Iberian sculptures, but also classical statuary. He may have painted Bust of a Woman, Arms Raised (Buste de femme, les bras levés) from a live model, but by virtue of painting her in grey and with empty eyes, it comes across as a picture of a statue--perhaps a Roman statue in the Constantinian style.

The exhibit also includes lots of drawings and an etching, which is a little bit of a cheat since drawings and etching are customarily black and white anyway. Still, I was happy to see them, especially the etching Minotauromachy. 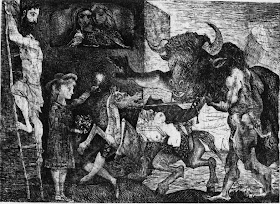 Picasso really worked the plates on his etchings. This means they have some especially black blacks. Minotaromachy is a deep, dark work with a rhythm of light and dark that is astonishing. I also like that it shows an event or an episode from a story. And if you wish, you can compare Picasso's technique to that of Goya. There is a whole gallery of Goya etchings in the Portrait of Spain exhibit right upstairs from Picasso: Black and White.

This show is a bit exhausting. At the end, you long to see some bright colors--perhaps Girl Before a Mirror. After all, Picasso didn't eschew color. What this exhibit mainly demonstrates is that Picasso was so prolific that it is possible to mount a substantial exhibit exclusively out of all the work he did without color. A similar exhibit could be mounted using only of Picasso works with fairly intense colors. I look forward to that one and many more.