In 2009, Beth Secor had an exhibit, Riffing on Langer’s Lines, at Inman Galler. It consisted of a series of portraitscomposed of brightly colored embroidered threads. It was an interesting technique--the threads seemed chaotic in both the directions of the stitches and their colors, but despite this, they cohered into very affecting portraits. And it was the obsessive stitching, which could be lickened to mark-making, that made them work. 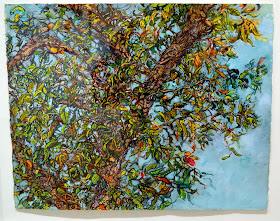 I was slightly disappointed that the work in this new show wasn't sewn (even though I can understand not wanting to repeat what must have been a difficult, tedious technique). But the strange thing is that while Secor is using more traditional means to create these new pictures, they still look similar to the stitched pictures. 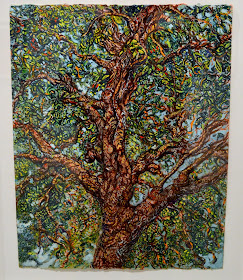 Part of this has to do with the subject matter she's chosen. Trees with blue sky showing between the branches afford her an opportunity for a surprising range of colors--blue, many greens, reds, yellows, and browns. That range is fully on view in Oak Tree, Summer After the Drought 2012 and Pecan Tree, Fall 2012. And the way she applies these colors, in little drawn marks, resembles the stitching of her earlier works. 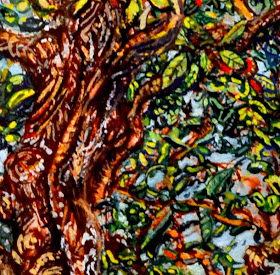 These color drawings aren't quite as audacious as the sewn drawings (for instance, Man From Photo Booth, 3/4 Portrait). The drawings of trees generally depend on local color, except for a couple that are essentially monochromatic. The sewn drawings have all kinds of colors as elements that build up into a recognizable whole (in a way similar to Chuck Close portraits, where each individual color may be unrelated to the flesh he is depicting, but it wall works out when you step back). 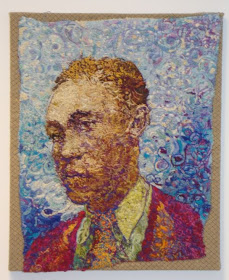 What fundamentally links the two bodies of work is the mark-making. The stitches in the embroidered pictures read as choppy little marks, which are also the basis for the tree pictures. Based on Trees and Riffing on Langer's Lines, you might conclude that Secor has a signature style of mark-making. But if she does, it wasn't very evident in her Project Row Houses installation, Blueprint for Heaven. 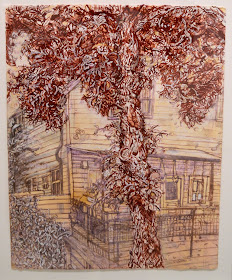 This group of pictures reflects trees that have lived through the drought of 2011, which is reckoned to have killed millions of trees in the Houston area alone (I've seen estimates reported that range from 19 million to 66 million trees dead locally). Many of Secor's trees are portraits taken during the drought. And I presume Distressed Pecan 2011 is distressed because of the drought conditions. But all of her trees are alive, and to an untrained eye don't appear to be in bad shape. One might almost take away a message of resiliency from these pictures. But if you view them as nothing more than pretty pictures of trees, that's OK too.