When Becky Soria exhibited art based on Paleolithic cave paintings at Redbud Gallery in 2011 she made a few statements, the importance of which to understanding her art I failed to fully appreciate. Prehistoric bison and horse imagery, she said, calls up “profound, hidden, unconscious” parts of the psyche. She also spoke of her deep interest in biology and systems of the body, which dates back to childhood with a physician father.

It was the totemic figures with fragmented torsos and brightly colored entrails she showed at Deborah Colton Gallery in 2012 that helped me realize how effectively her earlier statements illuminated her art. Recently I previewed the newest paintings of Paleolithic cave animals and abstracted human figures that she will exhibit in Signs, Symbols, Sentinels at Archway Gallery on February 2, and, with what I believe is deeper insight into her work, asked Soria a few questions.

Virginia Billeaud Anderson: Your show at Archway opens on February 2 and runs through February 28. How many pieces will we see, and what are they?

Becky Soria: I will exhibit 11 paintings, 8 in larger size, 3 on a smaller scale, all painted on canvas or wood. I will also show 9 works on paper, mixes of painting and drawing, using charcoal, pastel, acrylics and oils. Remember, I will be giving an artist talk at 6:30 pm the evening of the opening.

VBA: On a simplistic level you are an artist looking back at other artists who worked 30,000 years ago, during the Paleolithic.

BS: The thing that is so intriguing is that we don’t know their arts’ purpose, anthropologist can only speculate about its meaning.

VBA: But you are drawn to its properties.

BS: Yes, along with the enigma of their meaning, I’m fascinated by their present look, that is, the plasticity they have today, altered and damaged by time. Some of the drawings and paintings incorporate uneven cave wall surfaces into their design. I take from all of that, and make “my own” contemporary expression. Most importantly I am trying to capture their mood. 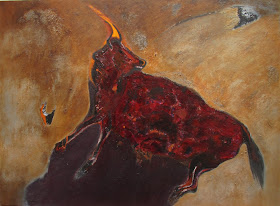 VBA: You’ve used the word “primitive” in some of our past discussions, and also titled your 2011 exhibition with that word. What does it mean to you?

BS: It’s a quality in pre-Colombian art or African art, related to simplicity, distortion, a sort of reductive abstraction that reaches to the essence of something. You know it by its estranging imperfection. The primitive was all around me when I was a child in Bolivia, the archaeological site of Tiahuanaco, for instance, and my father had an important collection of pre-Colombian artifacts.

VBA: That word perfectly describes my Moche statue with a decidedly estranging fan shaped head. By the way, Picasso shared your view of the primitive. Your reds knock me over - crimson, vermilion and magenta. Humans’ use of red ochre dates back to the Paleolithic, meaning red was one of the first colors used artistically. Make a comment about your choice of colors. Are they symbolic?

BS: I have an instinct for reds in all its combinations, they come naturally to me. And they do hold symbolism. I use them to portray strength, passion, mystery, life. In general I am drawn to earth colors.

VBA: As you know I traveled throughout Peru so those reds are not unsurprising. I’ll never forget the red on the relief carvings at the Temple of the Moon in Trujillo, still dramatic after centuries. And the Andean textiles I saw were surprisingly vibrant.

BS: I assimilated it as a child. 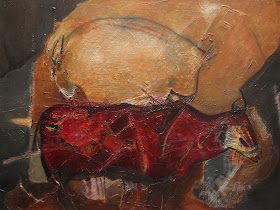 VBA: Let’s talk about the stylized human figures in some of your works. The stick figures that float through Umbral’s composition appear to have the same gestures as schematic figures in the Toquepala Cave.

BS: Along with Western European upper Paleolithic images that date to roughly 35,000 or 40,000 years, I take inspiration from shamanistic societies such as the African Sand Rock, and others indigenous to the Americas. Some of my works on paper are derived from that imagery. 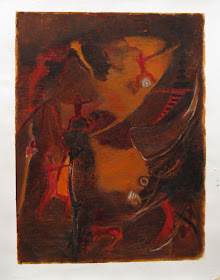 VBA: The leaping figure in Shaman has visceral components similar to those in the abstracted figures you showed at Deborah Colton.

BS: He is a shaman. Many believe Paleolithic cave paintings in Europe and North Africa were made by the societies’ shamans, who entered the caves, went into trance, and painted images related to their visions. Their art, like fertility goddess figurines, represents man’s earliest use of symbolism. You have seen many of my goddess figures which are grounded in the mystical. Similarly, I use shamans and animals ritualistically. 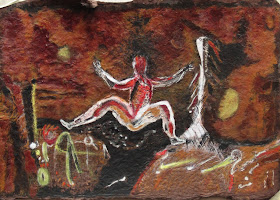 VBA: Becky, during one of our visits you said our “primordial ancestry as human beings” is central to your art. Primordial is an arresting word. I take this to mean we carry within us collective memory of all that went before. Imbedded and capable of being brought to full consciousness are memories of millions of years of human existence, perhaps even those animal-like instincts that serve us. Our two-million year old human ancestor resides within us in the deepest levels of our psyche. The “profound, hidden” knowledge of your artist statement is the means to self-knowing and our fullest expression.

BS: Yes. Our relationship with these animals is at the root of artistic consciousness, deeply enmeshed in our DNA, which I believe is the reason they became a significant part of totemic, religious ritual for millennia.