Within Harif Guzman’s portfolio are artworks that reflect that which is exhilarating and soul-destroying about New York. Examples can be found in his collage series “Uptown Downtown” in which photographic images of fancy people surrounded by fornicating cartoon figures posit the Warholian assessment that New York swells will rush downtown to embrace the underbelly. Guzman’s Dying to Live exhibition at Deborah Colton gallery through April 21 contains a few others, such as New York Lowlife which encapsulates New York’s high-brow and gritty with a coke-snorting cartoon figure that looks like Shakespeare and has blinking LED lights in its brain and “The New Yorker” inscribed above.

From statements made in interviews, it’s clear Guzman operates under a particular conviction related to art-making and life, gained from the experience of having overcome homelessness, that one must have real balls to exist in New York, and that to succeed as a collage or LED-light or photography, or video artist requires unholy scratching and scraping, which struggle, the only meaningful worthwhile thing, will probably do one in. Haculla Coco Chanel Collage exemplifies that bit of wisdom with a photo of the aged shrunken Coco in a cab next to cartoon Haculla (Guzman) giving the finger. The old woman’s abundant wrinkles under her fashionable grand-dame hat emblemize the creative path interrupted by decay and death. Searching the artist’s portfolio I found a conceptually similar piece with a booze-bloated, strung-out Joplin. 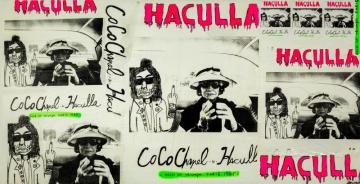 A handsome Venezuelan-born artist, especially one doing big deal things in the fashion and music industries, easily arranges to photograph beautiful women. One writer used the word pornography, but that is too strong a phrase to describe Guzman’s eroticism, which is less mouth-dropping than what can be found on Greek vases and Indian relief carvings, and reminds me of Picasso’s early drawings of figures screwing. Due to his success, there is an abundance of Guzman’s images on the internet, which is the reason I am aware that some of the exhibition’s collage elements originate from his fine art photography “Red Series,” in which he captured nude beauties in red-toned atmospheric illumination. A memorable photo has a blond posed butt-up doggie style near an image of Robert Plant with “Led Zeppelin” inscribed, possibly meant to amuse geriatric viewers with “back door man” connotations.

I mention Guzman’s fine art photography because a noticeable piece in the exhibition includes collage components from “Red Series.” Feline glows like a stained glass window at Chartres, due in part to its blue-toned illumination. The painting’s photographic centerpiece features female calves above theatrical high heels that echo carnality. Because the figure is posed with her hands near feet, her unseen rump in the air is part of the story, and beneath is a large cat with a halo surrounded by colorful botanical motifs. In one piece Guzman manages to filter impressions of nature’s organic forms, liturgical lighting, and a whore house. 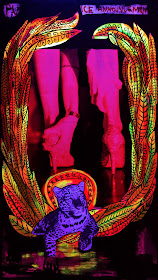 After viewing the exhibition’s thirty seven mixed-media works I decided to ask Guzman a few questions.

Virginia Billeaud Anderson: Please clarify the term “mixed media”--tell me about your materials.

VBA: Are the photographic images collaged in and painted over?

VBA: Do they sit on a structural ground such as canvas, or panel?

HG: Yes, on a canvas and sometimes this canvas is adhered to a wooden panel.

VBA: Are the artworks originals, or printed reproductions made in series?

HG: Reproductions of photos, but they are all original works of art.

VBA: Your recycling of fine art photography is intriguing. Did you digitally alter images from “Red Series,” with photo shop or other software?

HG: No, they are all shot with natural light and/or red lighting, not altered with any software.

VBA: According to your artist statement, your work “is about transformation.” Please elaborate.

VBA: Comment on the meaning of the exhibition’s title “Dying to Live.”